Moloney: I Will KO Inoue, Come Out As The Next Superstar In The Sport

Jason Moloney had a ringside seat in bearing witness to the fall of one highly rated pound-for-pound entrant.

Now, he’s ready to return to that same venue just two weeks later in taking down another.

Just as critics were silenced with Lopez’s Fighter of the Year-level performance, the insistence from this weekend’s underdog is that history will repeat itself.

“Every fighter has weaknesses, every fighter is beatable,” Moloney told BoxingScene.com. “We just saw it with Lomachenko. Some of these guys—like Lomachenko, like Inoue—get placed on pedestals and think they are untouchable. They are not.” 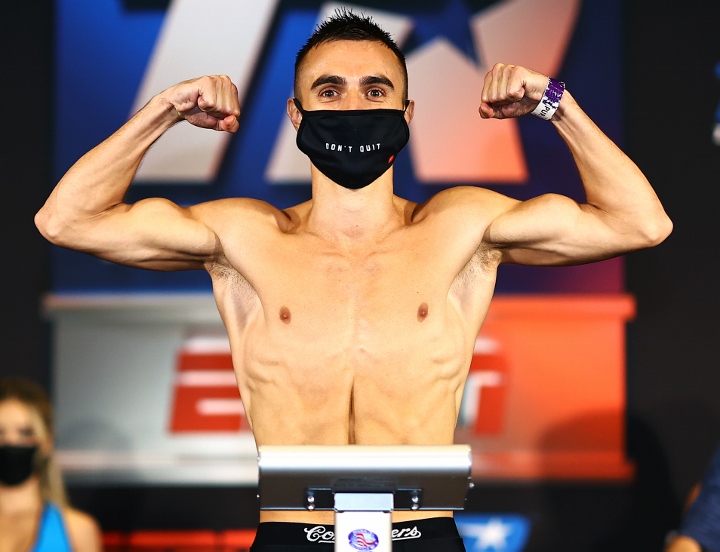 As much was observed with Japan’s Inoue in his last fight, a thrilling 12-round win over Nonito Donaire last November. The entertaining clash left Inoue with three bantamweight titles and top honors in the World Boxing Super Series bantamweight tournament. It also left him with a broken nose and orbital fracture.

A 51-week inactive stretch accompanies the Japanese superstar heading into this weekend’s title defense, just his second-ever fight in the United States and first in Las Vegas. Moloney (21-1, 18KOs) has fought twice since then, including a stoppage win over Leonardo Baez in this very venue this past June.

The win ran Moloney’s current streak to four straight following a narrow points loss to then-unbeaten bantamweight titlist Emmanuel Rodriguez in October 2018. The bout came in the quarterfinal round of the WBSS tournament, with Inoue icing Rodriguez in the 2nd round of their May 2019 semifinal clash. Six months later came the war with Donaire, which provided the first hint that he is human after all.

“A large chunk of my confidence is simply the belie in myself and the work I’ve put in for 17 years dedicating myself to this sport,” notes Moloney. “At the same time, I see a lot of holes in Inoue’s game. We saw that he’s there to be hit in the fight with Donaire. He’s an aggressive fighter and comes forward, which puts him in harm’s way.”

The fight with Inoue was one for which Moloney actively campaigned from the moment it was learned that the unbeaten wunderkind was in need of an opponent. A planned unification clash with John Riel Casimero in April was canceled due to the ongoing coronavirus pandemic. The bout was never rescheduled, with Moloney sliding into accept the challenge.

Already confident of pulling off the upset, bearing witness in person to Lopez’s masterpiece against one of the sport’s best technicians reassured the Aussie contender of this crazy 2020 truly being the year of the underdog.

In fact, he believes he can go one better.

“It was a real blessing to be there, watching a young underdog take out one of the pound-for-pound best,” recalls Moloney. “Seeing Teofimo Lopez with all of the belts draped over him, it was inspiring. It gave me that motivation and fire to believe I can do it.

“He’s the new face of boxing. What that win has done for him in his career, this is my chance to do the same. I don’t plan to let Inoue sweat out the scorecards like Lomachenko had to hear. I’m going into this fight to get the job done on October 31. I will knock out Inoue and come out of the fight as the next superstar in the sport.”

Just survive til round 9 and I'll be happy

I like how Maloney carries himself. Everybody is saying he's getting knocked out, but he isn't listening. He's hunting big game, not taking baby steps. Win, lose, or draw he's looks good in his ambition. I like underdogs and he's…

[QUOTE=Ricardi;20849254]Inoue knocked out Rodriguez in 2 who beat Moloney . So good luck bro[/QUOTE] While I do not know anything about Moloney outside of one fight, and feel like he will likely lose, triangle theories don’t usually work in boxing.…

Inoue will turn you from Moloney to baloney.

Inoue knocked out Rodriguez in 2 who beat Moloney . So good luck bro