Unbeaten welterweight contender Mikka Shonena solved the biggest test his rising career had seen so far in the pro ranks this past Saturday.

The 31-year-old Namibian put up for grabs his WBO Africa title for the fourth time against tough Chinese Youli Dong in the main event of a show producing 10 professional boxing contests in the city of Ongwediva in Namibia. 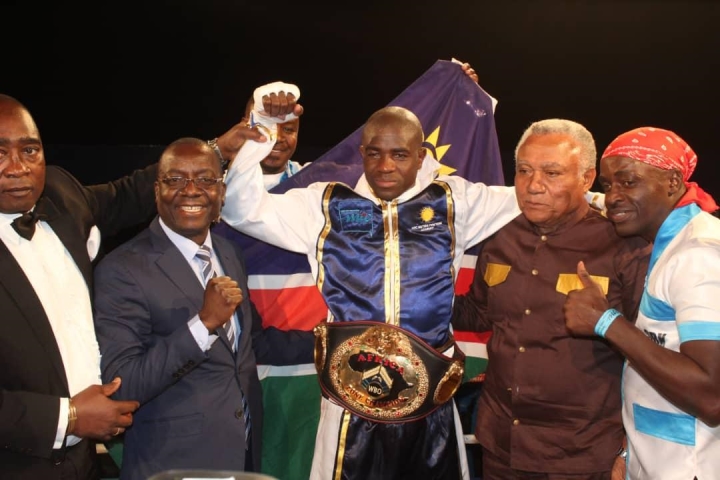 With the important victory against a fellow WBO regional titlist in Dong (14-2-1, 9 KOs), the unbeaten Shonena is expected to make further steps above the ranks on his journey to an eventual world title bout in the 147-pound division. The reigning world champion by the World Boxing Organization is American superstar Terence Crawford.

“[Shonena] is doing well and we are taking it one fight at a time. We hope for a much better rating from the WBO after this fight and there is no doubt that he will challenge Crawford in the near future,” said Shonena’s promoter, Nestor Tobias in a press release.

In the undercard, top prospect and son of Namibia’s first ever world champion, Harry Simon Jr, destroyed Zimbabwe’s Phillip Musariri in the second round. With his success, Simon entered his number of victories into double digit while his knockout ratio is as high as 80%.
Unbeaten middleweight prospect Paulinus Paulus outclassed Roy Yudha from Malawi in the second round. Paulus (9-0, 7 KOs) is a tall, lanky fighter with enormous power in both hands. He could easily become the next in line of talented Namibian prospects who rise into world level operators under the watchful eyes of Nestor Tobias.

The show took place at the Ongwediva Trade Fair Center in Ongwediva, was promoted by MTC Sunshine Promotions and televised by NBC.

[QUOTE=Mastrangelo;20019231]Watch out Bud Crawford, Shonena on the mission to take revange for Indongo.[/QUOTE] Since his struggling to get fights with the PBC boxers I see this fight happening...

Watch out Bud Crawford, Shonena on the mission to take revange for Indongo.