Mikey Garcia: Vargas Will Be Coming For a KO Win - Me Too!

The contest takes place on Saturday night, as the headline bout of a Matchroom card in Frisco, Texas. DAZN will be streaming the event.

Garcia is fighting for the first time since March 2019, when moved up by two weight divisions to the welterweight ranks and suffered a lopsided decision loss to IBF world champion Errol Spence. 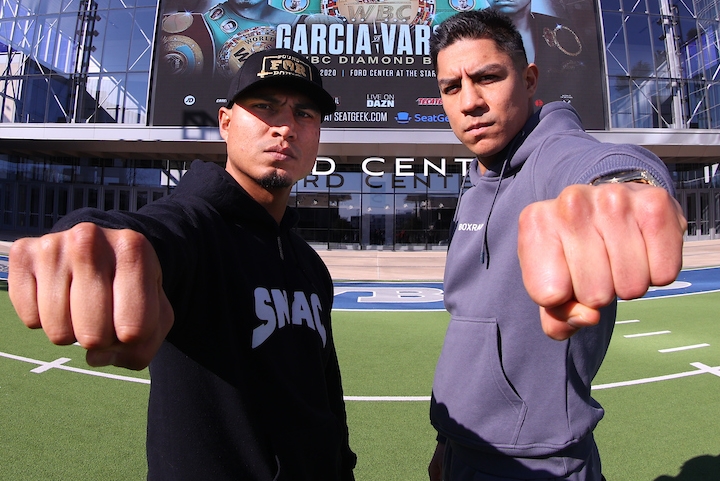 Garcia made the unexpected decision to remain at 147-pounds, for the fight with Vargas.

Vargas has just entering the junior middleweight division, but moved down in weight to take the fight with Garcia.

“This is my first time working together with DAZN and it’s been great. This is a tremendous card, a stacked card with world championship fights. I’m here to do one thing and take over the show – there’s a lot more to Mikey Garcia. I’m going to display all my skills and be a contender in the welterweight division," Garcia said.

"We landed on Vargas because he’s a two-weight champion, solid career, big size, and has height. He’s everything that people have been telling me I shouldn’t be fighting, but I’m going to do everything I can to win this fight. I expect the best Jessie Vargas and that will allow to me display all my skills. I don’t want easy fights. This will be a great matchup because Jessie is a warrior. It will push me to get the best out of me.

“Jessie is a great person, but inside the ring we’re competitors. He’s coming to knock me out, and I’m trying to doing the same, but that will make it a memorable night. Tune-in to DAZN, it’s going to be fireworks all night long. We’re going to finish it off with bang, Jessie and myself. There’s a lot more to Mikey Garcia.”

[QUOTE=jackblack008;20426045]Spence said on record, he would hv finished Garcia in which ever round he wanted but decided to showcase boxing skills[/QUOTE] I seriously doubt that, he was going all out and couldn’t stop Mikey. Then in his next fight got…

[QUOTE=jackblack008;20426635]Will be funny if Vargas make Mikey look bad enough for Manny Pacquiao to go cold[/QUOTE] I doubt it but then again..... But who would Pac run from I think both candidates are the wrong people to run from

[QUOTE=MulaKO;20426521]Really ? Fugh me , I just don’t see it Maybe because every time Vargas stepped up he’s been a disappointment to me And maybe I’m basing it to much on his fight with Broner[/QUOTE] Will be funny if Vargas…

[QUOTE=IceTrayDaGang;20426547]but he's fighting mikey garcia tho lol... vargas got the height and reach to keep mikey away. if he just box mikey then i see him beating him comfortably. mikey was not able to do anything to spence, and although…