There’s no getting around the fact that the last fight for Mikey Garcia was the worst of his career.

Not only does the former four-division titlist own it, but is willing to return to the scene of the crime in order to exorcise past demons.

Months of speculation as to when, where and on what platform he would next appear came to an end as Garcia was introduced as the latest boxer to ink a deal with Eddie Hearn’s Matchroom Boxing DAZN. His debut on the over-the-top (OTT) media service will come in a Feb. 29 welterweight clash versus former two-division titlist Jessie Vargas (29-2-2, 11KOs), taking place at Ford Center at The Star in Frisco, Texas. 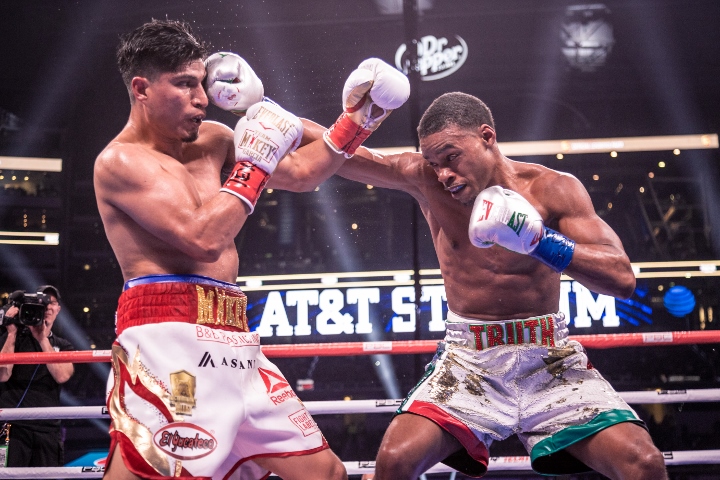 The venue serves as the practice facility for the Dallas Cowboys, whose AT&T Stadium served as the site for Garcia’s lopsided loss to Errol Spence in their battle of unbeaten pound-for-pound entrants this past March.

“I’m very excited to be returning back to the Dallas area,” Garcia (39-1, 30KOs) told BoxingScene.com of his second straight fight in the region. “I’m a huge Cowboys fan, To take part in the event with Spence in their stadium was an amazing experience, even if the fight didn’t turn out anything like we wanted.

“But it meant to a lot that (Cowboys owner) Jerry Jones was excited for me to come back here. I’m really looking forward to fighting against in front of my big fan base in Texas and especially in Dallas and Fort Worth.”

More than 47,000 fans poured into AT&T Stadium to witness his Fox Sports Pay-Per-View headliner versus home-grown Spence, with the event proving to be a commercial success. By the end of the night, however, it was also the end of Garcia’s as an unbeaten pound-for-pound entrant, dropping a lopsided decision in his ambitious bid at becoming a five-division champ.

The size difference between the two was apparent when the fight was first announced, with Garcia—who previously never competed higher than 140—moving up two weight divisions for the event. The 32-year old California native faces the same size disadvantages versus the considerably bigger Vargas, who has campaigned at welterweight or heavier since 2015.

Of course, that’s why they call it a challenge.

“I looked at other options the past few months, including fights at 140,” notes Garcia. “The big fights I wanted just weren’t available at the time I wanted them. The Spence fight really left a bad taste in my mouth, so it was important to come back here to welterweight. This fight with Jessie Vargas is the type of opportunity I was looking for.

“I didn’t want just any easy fight for my first one back after a loss. That doesn’t do anything for me. This is a real opportunity for me to show that there’s still plenty more Mikey Garcia. It’s not the loss, but how you come back from it that people remember the most. Winning a fight like this, at the weight and even in the (region) where I suffered my only loss will remind everyone that I’m a real [welterweight] contender and ready to fight for another world title.”

Giving MG benefit of doubt. Glad to see his lack of offense in his last fight didn't sit well with him. He should handle Sergio in later rounds.

[QUOTE=sceneboxing;20270236]Dude is not a welterweight. Just for the $$$. Back in the day these ffffers would have stayed in lightweight.[/QUOTE] I'll reply to myself. If you're fighting Jesse ffffing Vargas I have no idea why you are fighting at 147…

Left a bad taste in your mouth...Left an awful smell in the arena ! Vargas is an OK but safe opponent. Mikey may actually win some rds.

Dude is not a welterweight. Just for the $$$. Back in the day these ffffers would have stayed in lightweight.

Mikey is 5' 6", and has spent much of his career at feather and lightweight. I think he's not thinking smart by trying to avenge his lone loss at 147, where many guys are bigger and taller than him. Granted…