Mikey Garcia: Ring Rust No Issue; Was Out 2½ Years, Came Back To Win 3 World Titles

The 32-year-old Garcia hasn’t fought in nearly a year, not since suffering a lopsided loss to unbeaten IBF/WBC welterweight champ Errol Spence Jr. last March 16 at the Dallas Cowboys’ AT&T Stadium in nearby Arlington. This long layoff doesn’t concern Garcia because it isn’t even close to the most time he has spent out of the ring as a professional.

Garcia went 2½ years between bouts when he was embroiled in a contract dispute with Bob Arum’s Top Rank Inc., his former promoter.

“I took 2½ years off, came back and won three world titles,” Garcia told BoxingScene.com before a press conference Wednesday at the Omni Frisco Hotel. “I don’t see this as being about ring rust, or that time off is an issue. I think everybody’s gonna be very pleased with my performance Saturday night.” 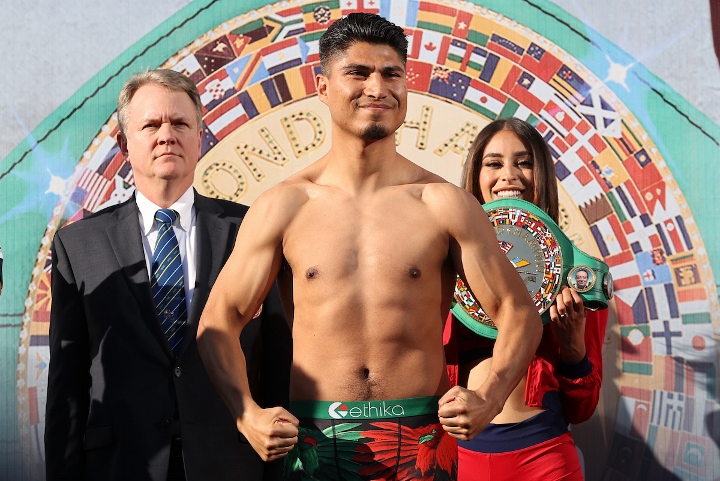 Garcia, a four-division champion from Moreno Valley, California, stopped Elio Rojas in the fifth round of his first fight after agreeing to a separation settlement with Top Rank in May 2016. In the fight after defeating Rojas in July 2016, Garcia knocked out Montenegro’s Dejan Zlaticanin in the third round of their January 2017 bout to win the WBC lightweight title.

Garcia later defeated Kazakhstan’s Sergey Lipinets by unanimous decision in a 12-rounder to win the IBF junior welterweight title. In his subsequent bout, he out-boxed Robert Easter Jr. in another 12-rounder to add Easter’s IBF 135-pound championship to his WBC crown.

Jumping up two weight classes to challenge Spence clearly was too much for Garcia. His first defeat definitely didn’t demoralize him, though.

“Everybody keeps asking the same question – how was the loss?,” Garcia said. “How was your mind? Nothing. I was fine. I was looking forward to coming back. But at the same time, I was focusing a lot of my time and energy outside of boxing. I got the promotional [company]. I’ve got a show Friday night, actually, here in Irving, Texas. In order for me to grow the company and grow the promotion, I’ve gotta spend some time on it. And that’s what I did.

“I put some time into other business ventures. … And just spending time with family and kids, and enjoying what boxing’s given me. So, I didn’t take time off because of the loss and dwelling on the fight. I just wanted to focus on something else.”

[QUOTE=SplitSecond;20432399]Ring rust affects everyone. It’s just that some guys never really left the gym. Being out affects even how you take a punch, so no one’s safe. At least do like Pacquiao and play basketball everyday, legs are everything.[/QUOTE] I…

[QUOTE=TheMyspaceDayz;20431784]I like Mikey in this fight but not at those odds. And ring rust affects those who rely heavily on timing. People who rely on flurries or inside fighting aren’t usually affected.[/QUOTE] Ring rust affects everyone. It’s just that some…