Mikey Garcia: Not The Loss But How You Come Back That People Remember

Mikey Garcia knew all of the risks heading into a pound-for-pound showdown with Errol Spence, but always remained confident that his name will always be spoken with a measure of respect regardless of the outcome.

It’s not to say that he’s ever been okay with suffering the first loss of his career and in lopsided fashion in a 12-round shutout to Spence last March at AT&T Stadium in Arlington, Texas. In fact, he is eager enough to return to the same setting for his next fight—a return to welterweight and in the greater Dallas area as he faces former two-division titlist Jessie Vargas (29-2-2, 11KOs) on February 29 at Ford Center at The Star in Frisco, Texas.

“This is a real opportunity for me to show that there’s still plenty more Mikey Garcia, and this fight was perfect,” Garcia (39-1, 30KOs) told BoxingScene.com of his ring return, which will stream live on DAZN. 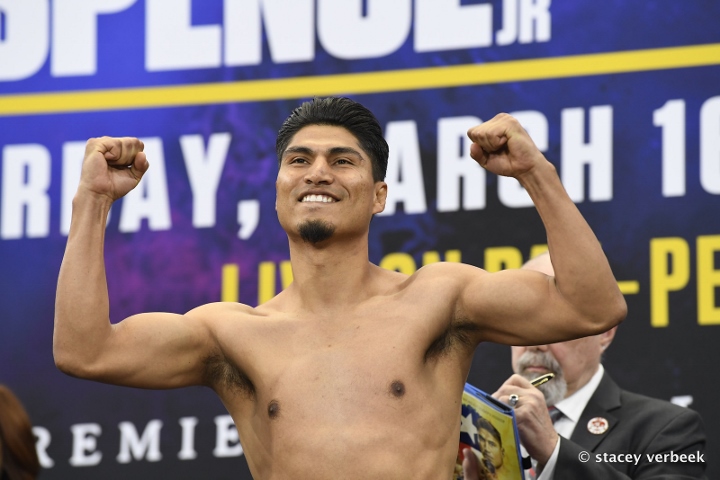 The fight has been well received from the moment it was announced, as was Garcia inking a short-term co-promotional deal with Eddie Hearn’s Matchroom Boxing USA. The former four-division champ from Oxnard, California saw name was floated in several circles, with opportunities ranging from a showdown with Danny Garcia to a crack and eight-division and reigning welterweight titlist Manny Pacquiao.

Also considered—though with the timetables not quite lining up to his liking—were potential big fights at 140 pounds, a weight division more befitting his 5’6” frame.

He ultimately settled on this matchup, putting to end a massive bidding war for his services.

“It just speaks volumes,” Garcia noted of the appreciation for his career. “I'm able to still create interest and attention. I was never worried about returning at this level [after the Spence fight].

“I knew people wouldn’t judge me just on one bad night. It’s not the loss, but how you come back from it that people remember the most”

[QUOTE=Shadoww702;20312425]Yes ppl bet for real $$$$. Amazon cards, Venmo, and a bunch of other ways to pay up. Most pay because they’re honorable only two haven’t paid up and they either started alts or no longer post. Win/win either way...[/QUOTE]…

I agree. But the way you lost, without even putting up a fight is too memorable Mikey Garcia’s highlights at Welterweight #boxing pic.twitter.com/JpGGUwDIjQ— Sam Dorsett (@Sam_Dorsett) January 8, 2020

People remember both. Especially if the loser lost like Mikey did

[QUOTE=JLC;20311946]Go back and read buddy. When did I say he would for sure lose ? What I said was he won’t take the fights because he is chasing big money fights. Those are tough fights against contenders who don’t move…