As pleased as they were with his performance against Jessie Vargas, Mikey Garcia’s brother and father still want him to move back down from the welterweight division to junior welterweight.

Eleven months after suffering his first professional defeat, a lopsided points loss to Errol Spence Jr., Garcia’s second straight appearance in the 147-pound division went much better versus Vargas. Garcia overcame a slow start to knock down Vargas in the fifth round and won a 12-round unanimous decision February 29 at Ford Center at The Star in Frisco, Texas. 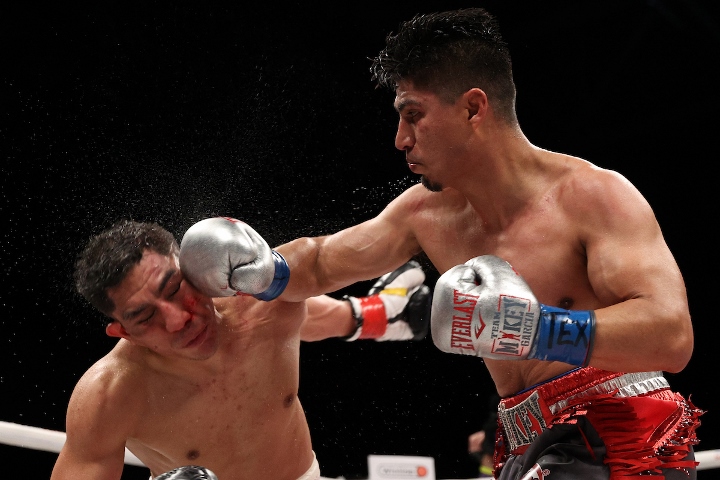 Garcia discussed why his father, Eduardo, and his older brother/trainer, Robert, maintain that he is better suited for the 140-pound division during the most recent installment of Chris Mannix’s Sports Illustrated boxing podcast.

“My dad was happy,” Garcia told Mannix. “My brother was happy that I won. They still tell me now that I did it, maybe I should consider coming back down to ’40. You know, they still feel that I’m a small fighter at 147 – I’m too small. My dad, especially, he feels that 140 pounds should be a better weight for me to be fighting at, men at 140 are more comparable to my size.

“You know, he still reminds me all the time, ‘You started at featherweight.’ I was a featherweight, you know, so size-wise I’m not a big [guy]. I still feel that my abilities, my skills are allowing me to compete at 147 and I feel I can win a title at 147. I mean, that’s part of the challenge. I wanna challenge myself.”

The Oxnard, California, native wants to become a five-weight world champion, preferably by beating WBA “super” 147-pound champion Manny Pacquiao (62-7-2, 39 KOs). The Philippines’ Pacquiao is a small welterweight and, unlike most potential opponents within that division, wouldn’t own a size advantage over Garcia.

The 5-feet-6 Garcia still understands why his brother and father are convinced he belongs at 140 pounds.

“We talk a lot,” Garcia said. “We get together daily, and we talk a lot about boxing, my career, you know, and other options. But in the end, it’s still my call. They agree, they understand that it’s my call to make the decision. But I do consider their opinions. I do consider it very much, and I do see their reasoning behind their opinion. I do see the reason why they feel 140 is a better weight class for me. But like I said, when I look at politics and I look at business, you know, it’s gonna be almost impossible to get one of those fights for a world title at 140. And I don’t wanna just be fighting contenders and waiting and waiting and waiting.

“You know, I actually feel that 147 pounds is a bigger challenge, but I still feel confident enough to accomplish what I want. You know, I wanna win a world title at welterweight. My dad also knows that I have the skills to do it. My brother knows I have the skills to do it. But it’s a dangerous [move]. It’s dangerous fights, a bigger challenge and, you know, that’s part of the risk. You know, but that’s also part of the reward. You win a world title in a fifth division against, you know, a big welterweight champion that nobody believed you could do it [against], you know, that’s in the history books. And that’s what I’m after.”

They're right, he's a pudgy looking little manlet at welter.

[QUOTE=archiemoore1;20494167]Mikey you haven't taken a whole lot of punishment in your career, and only you know how you feel inside your body. The fight you gave jessie vargas shows that errol spence didn't take as much out of you as…

I would love for Mikey to win a fifth division, but I don't see that happening. His only chance is against Pacquiao.

[QUOTE=pasawayako;20494259]If mikey could win his 5th division title he will be the first mexican to win it. Only the very elite boxer has won the 5 divison champion, mikey will be their with the likes of leonard, Mayweather, roy jones…