Mikey Garcia: I Wanted To Come Back At 140; Fights Weren't Available

FRISCO, Texas – Mikey Garcia agrees with those that suggest the former four-division champion appears better suited for success at 140 pounds than at the welterweight limit of 147.

Garcia would’ve preferred returning to the junior welterweight division for his first fight since Errol Spence Jr. dominated him in Garcia’s welterweight debut almost a year ago. The 32-year-old Garcia wanted to face a top opponent in his first bout back, though, and that type of fight wasn’t available at 140 pounds when Garcia began planning his return.

That’s why Garcia accepted another welterweight fight, a 12-round encounter with Jessie Vargas on Saturday night. Garcia recognizes that his detractors doubt him for good reason coming off his poor performance against Spence (26-0, 21 KOs), a powerful southpaw who owns the IBF and WBC welterweight titles. 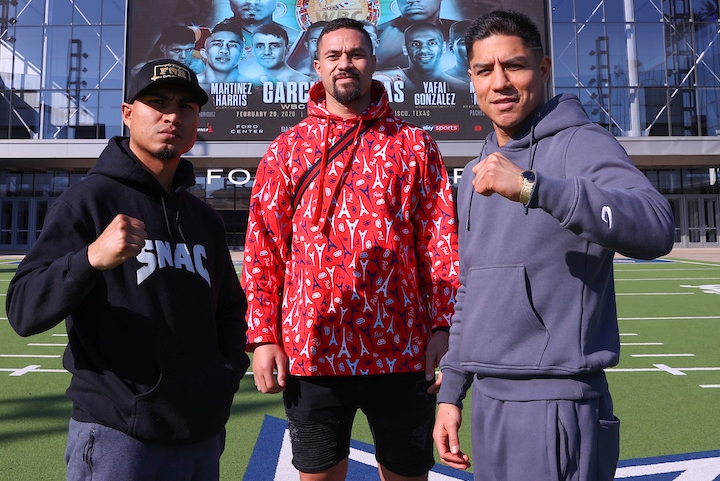 The Moreno Valley, California, resident is confident he’ll redeem himself, however, by beating Vargas convincingly in a main event DAZN will stream from Ford Center at The Star, the Dallas Cowboys’ training center (7 p.m. ET/4 p.m. PT).

“Originally, I asked for some fights at [140], but they were not available,” Garcia told BoxingScene.com before a press conference Wednesday at the Omni Frisco Hotel. “So, then they brought up different names. Jessie’s name was brought up, and I figured it’s a great opportunity for me to also answer a lot of other doubts and questions about whether I can fight at 147 or not. That’s a good opportunity for me to show everybody against a real former world champion, at welterweight. You know, a good display of my boxing skills will clear up all of those questions.”

Garcia (39-1, 30 KOs) will end nearly a one-year hiatus versus Vargas (29-2-2, 11 KOs), a former two-division champion. He hasn’t boxed since Spence beat him by unanimous decision last March 16 at the Cowboys’ home venue, AT&T Stadium, in nearby Arlington.

Even if Garcia overcomes Vargas impressively, he’s not sure if he’ll remain at welterweight for his subsequent bout.

“I’m gonna be open to any option,” Garcia said. “If there are good fights available at 140, I’m gonna look into that a little deeper and maybe come back down to ’40. If better options are available at ’47, then I’m gonna pursue a fifth-division world title at ’47. I think after this fight people are gonna consider me a solid contender who can actually do something at welterweight.”

[quote=bob haymon;20435941]and stank still has one of the worst resume's for a 3x champion. He young doe. His baby mama was more of a challenge than fonseca, ruiz and nunez.[/quote] his baby momma is levels above jo jo diaz aka…

[QUOTE=HaymonsWorld;20434891]TANK AND CHARLO AND LEO ALL HAVE BETTER RESUMES THAN DOO DOO AND CROSS EYED FARMER AND EMAIL CHAMP HANEY HAHAHAHAHAHAHAH :biggthump TANK KNOCKED OUT THE GUY WHO KNOCKED OUT FARMER HAHAH YOU CASUAL[/QUOTE] And Stank still has one of…

He just doesn’t look like a welterweight, he looked like a chubby lightweight at 147, 140 would suit him, and with Devin Haney looking to fight him at 140 I would say why not?

[QUOTE=Bob Haymon;20433446]Just like Gervonta, Santa Cruz, and Charlo.[/QUOTE] TANK AND CHARLO AND LEO ALL HAVE BETTER RESUMES THAN DOO DOO AND CROSS EYED FARMER AND EMAIL CHAMP HANEY HAHAHAHAHAHAHAH :biggthump TANK KNOCKED OUT THE GUY WHO KNOCKED OUT FARMER HAHAH…

[QUOTE=HaymonsWorld;20433250]haney was a email champ and wbc took that back too lmfaooooo.... Farmer and andrade and haney all bums fighting bums for fake belts on mismatchroom trash boxing and dead zone lmfaoooooo[/QUOTE] Just like Gervonta, Santa Cruz, and Charlo.