FRISCO, Texas – Mikey Garcia proved Saturday night that he is more than capable of beating a bigger fighter in the welterweight division.

With Errol Spence Jr. sitting ringside this time, Garcia returned from his only professional loss by defeating former WBO 147-pound champion Jessie Vargas by unanimous decision in their 12-round main event at Ford Center at The Star. Vargas obviously can’t compare to Spence, but Garcia needed this type of performance to demonstrate his ability to thrive at welterweight in his first fight since Spence dominated him.

The shorter Garcia overcame a slow start to knock down Vargas in the fifth round. The former four-division champion couldn’t drop Vargas again, but he mostly controlled the action in the second half of their fight.

Garcia (40-1, 30 KOs) won in his first fight in nearly a year. Before beating Vargas (29-3-2, 11 KOs), the Oxnard, California, native hadn’t boxed since Spence, the unbeaten IBF/WBC 147-pound champ, won every round on the scorecard of each judge in their 12-round title fight last March 16 at the Cowboys’ home venue, AT&T Stadium, in nearby Arlington.

“I did have to make adjustments,” Garcia told DAZN’s Chris Mannix in the ring. “I had to get adjusted to his height, reach, you know, natural size. I had to make those adjustments, but as the fight went on, I started [to feel] I started hurting him. I started closing the gap a little bit more, started feeling better with the rhythm, the timing and started to pick up the pace. And I think it worked out well.”

The 32-year-old Garcia acknowledged in the days leading up to this fight that he explored returning at the junior welterweight limit of 140 pounds. Garcia accepted the fight against the bigger Vargas because the kind of high-profile fights he wanted at 140 pounds weren’t available.

“I think I carried the weight a little bit better,” Garcia said. “That allowed me to perform better. I felt better. I landed on my feet when I had to. I was solid when I had to. He’s a big man, you know? Jessie’s a big man. The weight, I could feel the size difference. But my talent was able to overcome that.” 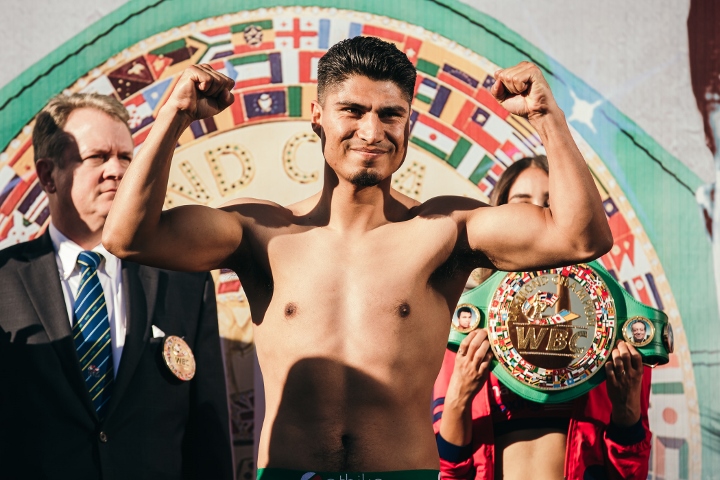 Garcia landed a left hook that seemed to stun Vargas in the 12th round. Vargas nailed Garcia with a right hand just before the final bell sounded.

Vargas hit Garcia with a straight right hand when there were just over 30 seconds to go in the 11th round. Garcia came back land a right hand that backed up Vargas.

A stiff jab and then a right hand by Garcia backed up Vargas early in the 10th round. Garcia blasted Vargas with a left-right combination just after the halfway point of the ninth round.

Garcia connected with numerous flush punches in the first half of the eighth round on a fatigued Vargas, whose body language looked like that of a defeated fighter.

Garcia landed a short right hand just before the midway mark of the seventh round, but Vargas shook his head to indicate he wasn’t hurt. Toward the end of the seventh, Garcia seemed to buzz Vargas again and unloaded a barrage of power punches as Vargas tried to cover up.

Vargas didn’t have his legs under him early in the sixth round, after suffering a knockdown during the fifth. Garcia landed several right hands early in the sixth, but he couldn’t drop Vargas again in that round.

Garcia’s right hand to the side of Vargas’ head staggered him with 49 seconds to go in the fifth round. Vargas stumbled and tried to stay away from an attacking Garcia.

Garcia then blasted Vargas with a picture-perfect right hand that dumped Vargas to the seat of his trunks in Garcia’s corner with 41 seconds to go in the fifth. Vargas smiled, slowly got up and barely beat Schorle’s count.

An aggressive Garcia tried to finish off Vargas, but Vargas survived to the end of the round.

“I started to hurt him as the rounds went by,” Garcia said. “I took him closer to the corner and landed a good right hand that put him down. I think he definitely felt the power and, after that, it seemed like every so often I would hurt him again. So, I really started to get the rhythm of things and I just kept going. I felt like my speed, my power was all perfect, and I was able to put it into effect against a bigger guy.”

Vargas caught Garcia with a looping left immediately after Garcia connected with a right just after the midway mark of the fourth round. Vargas pressed forward and landed another left hook up top as Garcia moved toward a neutral corner.

A straight right by Garcia landed early in the third round. Garcia’s left hook to the body landed hard later in the third.

Garcia’s overhand right backed up Vargas in third, but Vargas drilled Garcia with a straight right to the side of his head that backed Garcia into the ropes toward the end of that round.

A straight right by Vargas caught Garcia 43 seconds into the second round. Vargas snuck in a counter left hook up top later in the second.

Toward the end of the second round, Garcia landed a right and then a left that knocked Vargas off balance.

A short left inside by Vargas landed with about 1:05 to go in the opening round. Vargas’ left hook also landed with 35 seconds remaining in the first round.

Despite his strong start and size advantage, Vargas had difficulty dealing with Garcia’s power.

“I got a little confident in the fourth round, when I hurt Mikey,” Vargas said. “I thought I hurt him in the white corner, in the neutral corner. But, you know, I seemed to lighten up. But then again, Mikey fought a great fight. His timing was pretty good. It was precise. I give him credit. I don’t take anything from it. You know, I think it was a learning experience for me.

“I thought it was a very close fight, very entertaining for the people here in Frisco. You know, I hope that they enjoyed it. I’m happy I was able to give them a good, entertaining fight, their money’s worth. And I would like a rematch. I’m not arguing or disputing the decision, but I did think it was close. I think the knockdown made a difference. I really got overconfident with his power. I do think he has a good pop. You know, and credit to Mikey.”

[QUOTE=Jerseyjoe981;20445016]If he beats estrada decisively and avenges ko loss to sori he is in top 10 p4p. Thought he won first fight. Hes a lil undersized for this division. He was really fun to watch and thankful for hbo giving…

[QUOTE=indelible;20443294]Yafai is a good boxer not sure world class but he fought chocolatito’s fight. If the Estrada fight was controversial decision, rematch makes sense. Estrada has been inactive for a while and Chocolatito already got hurt last time training. I…

[QUOTE=Jerseyjoe981;20435132]He did but somebody on site said he wants to fight him again. What r your thoughts on yafia? Is he world class or just a regional fighter? Is roman back or was it just a good matchup 4 him.…

That was an entertaining fight! Vargas did well. Great win for Garcia!