Mikey Garcia: Arum Says I'm Asking For Numbers Out Of This Stratosphere - A Complete Lie!

From the moment he returned to the ring following a 30-month ring hiatus, Mikey Garcia has lived up to his promise of taking on all comers.

That task has become easier than ever to accomplish now that he’s campaigning in the talent-laden welterweight division. However, there remains one name in the mix whom the former four-division titlist doesn’t envision standing opposite corner from anytime in the near future.

“The only name I’m not looking at as much – and not because I wouldn’t want the fight but because I know the business would probably be impossible—is [unbeaten three-division and reigning welterweight titlist Terence] Crawford,” Garcia (40-1, 30KOs) stated during the most recent segment of Time Out With Ray Flores on the Premier Boxing Champions (PBC) Instagram Live account. “I’ve seen [promoter] Bob Arum maybe not say the nicest things about me. I just think that fight is out of the question. I’ve seen and heard Bob speak some things about me that taught me he doesn’t want to work.

“It’s not that I wouldn’t fight Crawford and I don’t think Crawford has anything against fighting me. He would love to fight. Being that he’s held by Top Rank and Bob Arum, that’s just complicates things for the moment.” 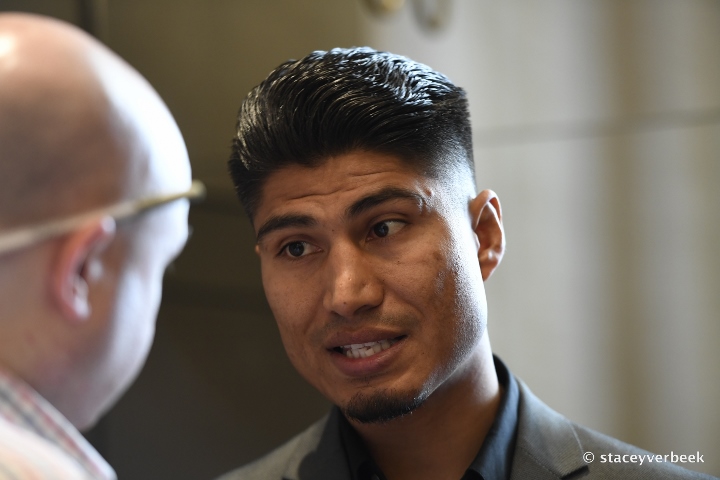 Garcia began his career with Top Rank, having won titles at featherweight and junior lightweight under their banner before going cold following his win over Juan Carlos Burgos in January 2014. A lengthy legal battle ensued, with the 32-year old Oxnard, California native eventually breaking free from the Las Vegas-based outfit before resuming his career in July 2016.

Seven fights have followed, including title wins at lightweight and junior welterweight. The only thing he’s yet to accomplish is winning a belt at welterweight. For now, all that’s required is patience—and settling for fights within his reach rather than dreaming about the ones that have little to no chance of taking place.

“We would definitely be able to fight Crawford. I would love to fight Crawford,” insists Garcia, who is coming off of a 12-round win over former two-division titlist Jessie Vargas (36-0, 27KOs) this past February. “Bob always says that I’m too difficult to negotiate with, that I’m asking for way too much money to negotiate. I will ask him when has he ever spoken to me about discussing a fight?  I’d say never, zero. When have we ever discussed a fight? Zero. Not since, 2013, 2014. Not since then. I don’t know what he’s saying that I’m asking for too much money. Maybe his employees, his workers are telling him that I’m too difficult. Maybe that’s what’s going on. Maybe he’s just getting the wrong information. I’ve never sat or discussed anything with Bob Arum regarding a possible fight with either one of his fighters, Crawford or Lomachenko.

“He’s always says I’m asking for numbers out of this stratosphere, which is completely a lie. I’ve never discussed these numbers with anyone at Top Rank. Not a single time. I would fight anybody. If he invited me or I invited him over to discuss a fight with Crawford—if we can get together and do the figures and the accounting the right way, with nobody being greedy then we have a fight. But I also understand the way business is run and the way he runs his business is very different from the way I would like to run a fight. It just probably wouldn’t happen. It’s just one of those things where why chase something that’s probably not going to happen.”

[QUOTE=Get em up;20547978]It's hard to say but I'm gonna say possibly Haney is young and on top of the world right now my only worry with him is how does he deal with adversity. As bad as I hate to…

[QUOTE=Bronx2245;20545946]You think Devin Haney beats him @ 140?[/QUOTE] It's hard to say but I'm gonna say possibly Haney is young and on top of the world right now my only worry with him is how does he deal with adversity.…

[QUOTE=wrecksracer;20547520]What am I talking about? It was his choice. I don't care what he weighed. He promised a fight and didn't deliver. Damaged goods. I would never pay to see him fight. Quit crying about his weight. He charged a…

[QUOTE=UNBANNED;20547480]What are you talking about? Mikey is.a former 130lb champ who jumped from 135 to 147 for the fight. The opponent, Spence, is a career WW and wouldnt be a small JMW had significant height, reach, and weight advantage. Spence…