Andre Ward was all of two years old at the time a teenaged Mike Tyson began his meteoric rise to heavyweight immortality.

The legacy left behind by the one-time baddest man on the planet, however, is legendary enough for the former two-division world champion to have become well versed on the subject.

“I was obviously a baby when Tyson was on his way to a title shot. I became more acquainted post-prison Mike Tyson. The reputation preceded him,” Ward noted while hosting an ESPN-televised marathon of Tyson fights on Saturday, along with fellow network commentators Joe Tessitore and Mark Kriegel. “It caused me to study and want to find out who this figure was, and I’ve followed him ever since.” 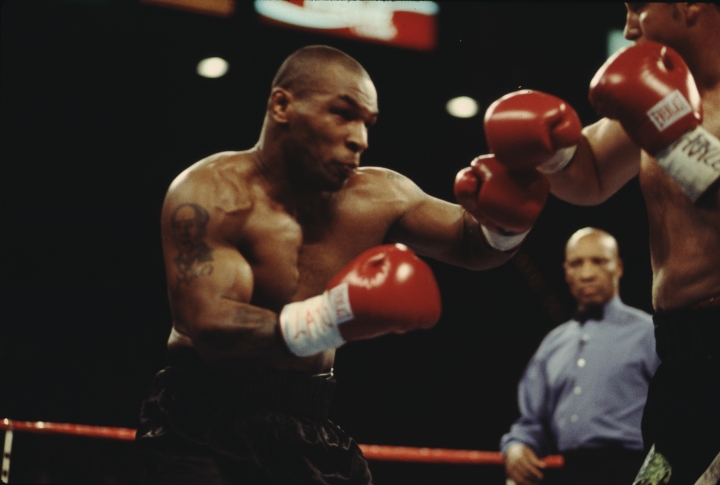 The four-hour marathon chronicled nine fights spanning a four-year period, beginning with his 2nd round knockout of John Alderson in July 1985 and concluding with the first of two knockout wins over England’s Frank Bruno, having stopped the Brit in five rounds in July 1989. By fight’s end, Tyson boasted a record of 36-0 (32KOs), amassing such a mark by age 23 and just four-and-a-half years into his pro career.

A 2nd round knockout of Trevor Berbick to win his first heavyweight title in November 1986 was preceded by a breakneck schedule where he crammed 27 fights into a 20-month period, including a ridiculous eight fights in just over four months from May-September 1986 while barely having time to celebrate his 20th birthday during that stretch.

It was the type of sacrifice he was willing to make in order to land in the history books as the youngest ever heavyweight champion. Three fights later, Tyson laid claim to every major heavyweight title at the time, even if historians needed him to still conquer lineal heavyweight champion Michael Spinks in order to prove his true claim to the throne. Tyson needed just 91 seconds to accomplish the feat, coming three days shy of his 22nd birthday.

By that point had well established himself as pound-for-pound the best fighter in the world and without peer.

“I think there’s a lesson for today’s fighters,” notes Kriegel, one of the few active sportswriters today who had the privilege of covering the prime years of the legendary Hall of Fame heavyweight. “You can’t build a mythology, you cannot become iconic unless you fight. That year that led up to [the championship], Tyson fought 13 times in [eight] months on his way to becoming the youngest ever heavyweight champion.

“For the guys who look at this today, you don’t become a champion on the internet. You don’t become champion by picking fights with someone on Instagram. You do it through deed.”

Tyson retired in 2005 with a record of 50-6 (44KOs) and two no-contests. Two title reigns came over the course of his career, gaining enshrinement in the International Boxing Hall of Fame in June 2011, elected in his first year of eligibility.

Perfect timing where a bully was let loose in a china shop. Those stars don't align very often.

[QUOTE='b';20589360]Hughie Fury had 12 fights in 7 and a half months...(his first 12 fights as a pro). To play devil's advocate, can anyone in this thread list the victories Mike Tyson has over prime, ATG opponents and natural Heavyweights?[/QUOTE] You…

27 fights in 20 months!!! Has any HW ever done that? That is like fighting every 3 weeks yet someone said he would have KOed him on his prime?

[QUOTE='b';20590817]"The unbelievers are filthy and are heretics, ignore them"[/QUOTE] No, they're just plain haters, usually. Someone less stupid brings more concrete elements of discussion, which I always read with attention and genuine interest. I'm not a blinded fan boy, if…

[QUOTE=Tatabanya;20590700]Look, one can spend ages explaining the greatness of Tyson to [B]people who don't have a clue about what "phenomenon"[/B] or "natural talent" [B]mean[/B]. It's like trying to illustrate the sheer beauty of a raging sea to a nerd who…