Watch all the action from the fight, as well as an exciting undercard which includes YouTube sensation Jake Paul going toe-to-toe with former NBA star Nate Robinson. 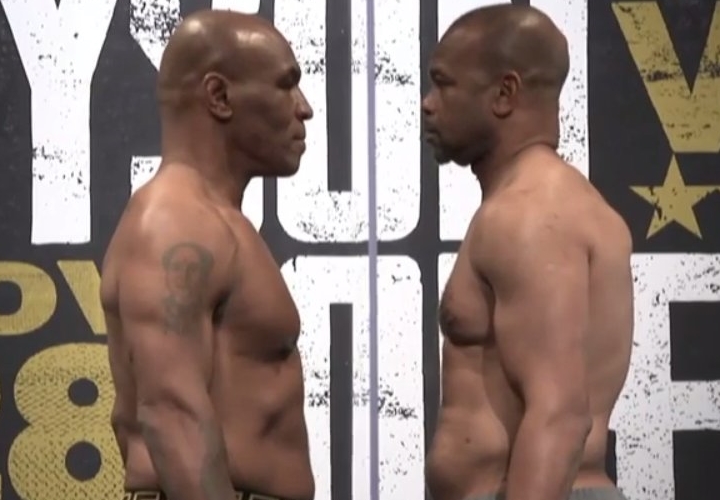 The former undisputed world heavyweight champion, “Iron” Mike Tyson last stepped into a ring professionally in 2005, where his glittering career came to an end as he lost to Kevin McBride in six rounds.

Now, the 54-year-old faces off against Roy Jones Jr., who held world titles at middleweight, super middleweight, light heavyweight and heavyweight over the course of his 29-year career, as two of the greatest boxers of their generation go head-to-head.

[QUOTE=killakali;20916389]PBC should sign these guys up to beef up fs1 ratings. They not evening braking 100,000 views in the USA[/QUOTE] That’s a flat out lie. Ugas vs. Ramos drew 1.1 million viewers. And when did boxing become about Promoters, networks,…

[QUOTE=Oldskoolg;20915982]Roy been exhausted since the first round. Definitely clear who came into the fight in better condition.[/QUOTE] PBC should sign these guys up to beef up fs1 ratings. They not evening braking 100,000 views in the USA

You guys who wrote the blurb that passed for an article should be embarrassed and ashamed of yourselves for scoring this exhibition for CHARITY as if it were a real fight. They were patriotic and sorting to do this during…

[QUOTE=sargo;20916004]So how impressive was George Foreman II[/QUOTE] Foreman was only in his middle to late 30s a VERY different thing. Impressive that he won a title at 45, but Moorer had a poor chin, and Foreman had lost every round…

I surely would be suprised if tyson does 1 more vs holyfield or maybe david haye.. Tyson looked good for age good enough to do 1 more max n sale.. U can see exhibitions is new thing now. Its like…