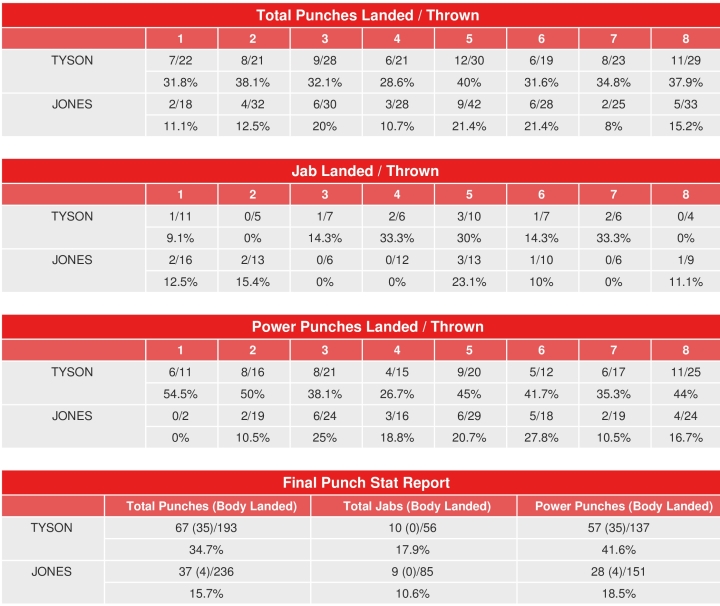 Most observers saw Tyson as the clear decision winner.

And Jones, 51-years-old and a former four division champion, last fought in early 2018.

Tyson was going after Jones, who was sticking and moving. There was a lot of holding with Jones getting hit to the body when he would grab on. Tyson was throwing a lot of punches.

Jones continued to hold often in the second, as Tyson was charging in with big shots. In the third, Tyson was looking for the big shots with Jones still doing a lot of holding.

During the fourth, Jones was hurt from hooks to the body, but managed to weather the storm. During the fifth, Tyson continued to connect with the much bigger shots. Jones seemed to be completely exhausted in the sixth as Tyson was doing most of the work.

Jones tried to let his hands go in the seventh, but Tyson came back firing with hard shots the body. More holding by Jones in the eight, as Tyson was trying to land something big and did most of the work.

One thing about boxing, judging will always be corrupt

come on Roy, y'all musta forgot how to score a fight. Mike outlanded you in almost every round. He landed the better punches. He was chasing you around the ring.

Vinnie Paz on the crack pipe again... What a jerk off... Just trying to make Jones look better...coz Jones bashed his face in 20 years ago... No one gives a faaark any way... Your a maggot paz