Opponents had to escape the jaws of life when fighting Mike Tyson during his vicious and violent prime. (photo by Jason Elias/Discovery Channel)

Tyson will now get a glimpse of what the feeling was like for opponents facing him at the peak of his powers when he jumps into the deep end for a heavyweight showdown against a Great White Shark.

Titled “Tyson vs. Jaws: Rumble on the Reef,” Iron Mike will go underwater against the shark in the name of research. To build up the bout even further, Hall of Fame ring announcer Michael Buffer will offer his voice to the proceedings.

“I took on this challenger to overcome fears I still deal with in life. I equate this with overcoming my fear of getting back into the ring at 54 years old,” said Tyson, doubling down on his recent tease of moving forward with a comeback fight. “I learned from this experience doing Shark Week that whatever intimidates me, I am still able to step up to the challenge of overcoming anything that would prevent me from accomplishing my life’s mission of reaching my highest potential in life and bringing me closer to God.”

In a promotional video, Tyson is seen running on the beach as if he were cast as David Hasselhoff in “Baywatch.” He proceeds to flip over a covered steel cage only to then punch and break a surfboard before struggling to inflate a rubber raft with his mouth.

"Shark week is hard, man! Whew! ... Someone is going to get bit," Tyson exclaims before flashing a bright smile.

In a press release, Discovery described that Tyson “will combine the best of science and technology to capture the secret lives of sharks taking viewers where cameras have never been before.” 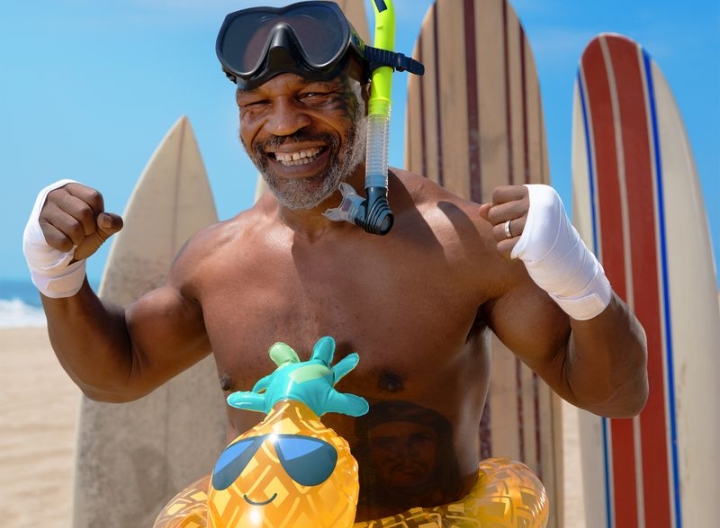 Viewers wondering if Tyson will sink his teeth into a shark much like he did with Evander Holyfield in 1997 will be left thoroughly disappointed. Discovery stated “no sharks were harmed (or bitten) in the making of this episode.”

It’s highly unlikely Tyson will put his life or well-being in danger by actually mixing it up with a shark.

Tyson battling a shark may not be as crazy as it sounds.

The youngest heavyweight champion ever used to keep a trio of tigers as pets soon after his release from prison in 1995, and even allowed for the big cats to sleep in his bed.

“I was foolish,” Tyson said earlier this year. “There's no way you can domesticate these cats 100 percent. No way that's going to happen. They'll kill you by accident, especially when you're playing rough with them, you're punching them back. They get hyped up, hit you back and you're dead.

“I used to sleep with them. I'm just happy I educated myself. It was late. But I was doing the wrong sh-t. I shouldn't have had them in my house, believing they were domesticated. I was wrong.”

Shark Week will return this year for its 32nd annual installment with an eight-day stretch of programming.

I thought Shark Week got canceled because of "Great White".

[QUOTE=famicommander;20659827]Tyson has a Che Guevara tattoo? Did anybody tell him Che was leader of a firing squad that executed children?[/QUOTE] Has a MAO tattoo also. Got them when he was 20 or so and had an infatuation with rulers/revolutionaries. Had…

[QUOTE=famicommander;20660559]I'm not a conservative and Guevara was a communist butcher. Only morons admire him. His legacy is one of brutality and utter economic ignorance.[/QUOTE] He did help to free Cuba from a fascist regime but then helped to replace it…

[QUOTE=budfr;20659923]Typical brainwashed conservative. Che Guevara is admired by millions. And no, he didn´t execute children. He did execute the ones who deserved it.[/QUOTE] I'm not a conservative and Guevara was a communist butcher. Only morons admire him. His legacy is…

[QUOTE=famicommander;20659827]Tyson has a Che Guevara tattoo? Did anybody tell him Che was leader of a firing squad that executed children?[/QUOTE] Yeah, Mike says that's precisely why he got it. Motivation for when he stomped on his enemies' kids' balls.