The previously unknown underdog upset Joshua Greer Jr. by majority decision in the main event of a five-fight card ESPN televised from MGM Grand Conference Center. The patient, powerful Plania dropped Greer with left hooks in the first and sixth rounds, and the Filipino fighter fended off Greer’s late rally to win their 10-round junior featherweight fight on two scorecards.

The Philippines’ Plania (24-1, 12 KOs) took this fight on a little less than four weeks’ notice. Chicago’s Greer (22-2-2, 12 KOs) turned down other opponents before picking Plania, a junior featherweight contender who dropped down two pounds to fight Greer at a contracted catch weight of 120 pounds.

“This will change my life,” Plania told BoxingScene.com through a translator. “I’ve been dreaming for this since I was kid, and now God gave me a chance.”

Plania initially thought Tuesday night that he would win by knockout because he sent Greer to the canvas with a left hook barely a minute into their fight.

“I thought that he wouldn’t stand up anymore,” Plania said. “But I was still focused and kept relaxed because you never know – anything can happen in boxing.”

Greer got his second wind in the final three rounds, but Plania still snapped his 19-fight winning streak. Prior to Tuesday night, Greer’s lone loss was a four-round majority decision defeat to Philadelphia’s Stephen Fulton (18-0, 8 KOs) in December 2015.

Greer entered the fight in prime position to land a bantamweight title shot either later this year or early in 2021. He is the number one contender for WBO bantamweight champion Johnriel Casimero’s 118-pound title and the IBF’s second-ranked challenger for Naoya Inoue’s crown.

The 23-year-old Plania, who is from Manny Pacquiao’s hometown of General Santos City, extended his winning streak to nine by pulling off undoubtedly the biggest win of his five-year pro career. He has lost only to former WBA/IBO bantamweight champ Juan Carlos Payano (21-3, 9 KOs), who beat him by unanimous decision in a 10-rounder in March 2018. 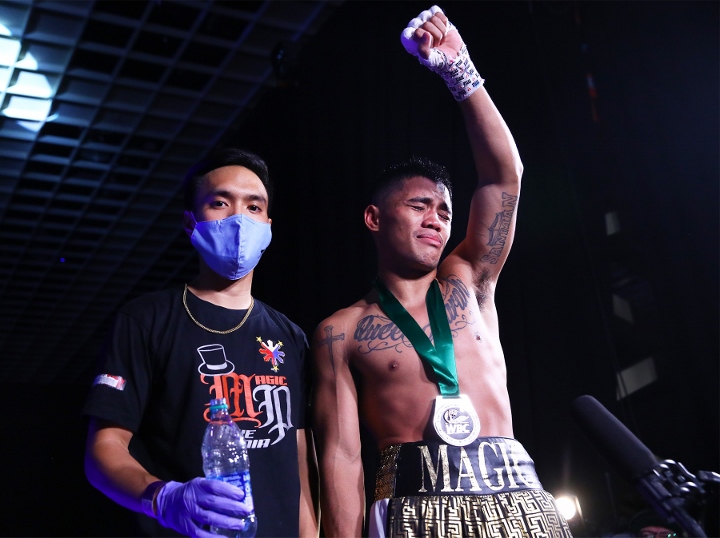 Despite dropping Greer twice, it was Plania who literally held on for the victory. Plania tied up Greer numerous times in the 10th round, when it was obvious that the exhausted Plania was merely trying to make it to the final bell.

“I was tired,” Plania said, “but not too tired. I just adjusted my game plan.”

An aggressive Greer continued coming back in the ninth round. Plania appeared tired at the point and was simply attempting to fend off a re-energized Greer.

Plania held Greer several times in that ninth round and fought off his back foot throughout those three minutes.

Greer got inside on Plania in the eighth round and landed several short, hard shots. Plania had his hands down and didn’t move his head, though he didn’t appear hurt at any point in that round.

Another quick left hook by Plania sent Greer to the canvas just before the sixth round ended. Greer easily beat Weeks’ count, just as he did during the first round, and he assured the veteran referee he was OK.

Plania landed a left hook up top, but then hit Greer with a low left that caused a brief break in the action just before the midway mark of the fifth round. A quick left hook by Plania caught Greer with 2:04 remaining in the fourth round.

Greer used his legs throughout the third round and tried to avoid Plania’s power. Neither fighter landed impactful punches in that round.

Plania’s lead left hook knocked Greer to the canvas just 1:10 into the fight. A stunned Greer smiled when he got up, but clearly was caught off guard by Plania’s power.

Greer kept his distance for much of the remainder of the first round and tried to work off his jab. Plania landed another chopping right hand to the side of Greer’s head just before the opening round ended.

Plania took the fight on short notice which explains why he gassed out early. But he still needs to work on his inside game because Greer exposed that weak point in him.

[QUOTE=Squ□redCircle34;20620140]Lol but that’s not how you win rounds either! It shows a big flaw in his game, a solid inside fighter with good instincts and head movement and who’s his size will work their way in while watching for the…

[QUOTE=Monty Fisto;20619675]So, Plania clinched to tied him up and Greet couldn't effectively fight out of it. That seems more like you're agreeing with my assessment that Plania found a way to deal with the change in tactics than with your…

94-94, Please. Ray Charles scored it 97-92. Magic Mike was clearly the winner. Needs to learn how to deal with being pressured. Inside exchanges were so-so. His left is unlike any I’ve seen. His rotator cup has got to be…

[QUOTE=Squ□redCircle34;20617714]Lol no he didn’t, he basically just tied him up the rest of the day way, he’s so much bigger than Greer that Greer couldn’t effectively fight out of the clinches too much! [/QUOTE] So, Plania clinched to tied him…