OMAHA, Nebraska – Mike Alvarado faced an opponent he was supposed to knock out Saturday night.

The fact that Alvarado did what he was supposed to do so impressively still encouraged his handlers at Bob Arum’s Top Rank Inc., that Alvarado could fight for a 140-pound title again next year. Alvarado destroyed journeyman Robbie Cannon in less than two rounds on the Terence Crawford-Jose Benavidez Jr. undercard at CHI Health Center.

The 38-year-old Alvarado, of Thornton, Colorado, dropped Cannon twice with right hands in the second round. The second knockdown left Cannon under a bottom rope and unable to continue 41 seconds into that second round. 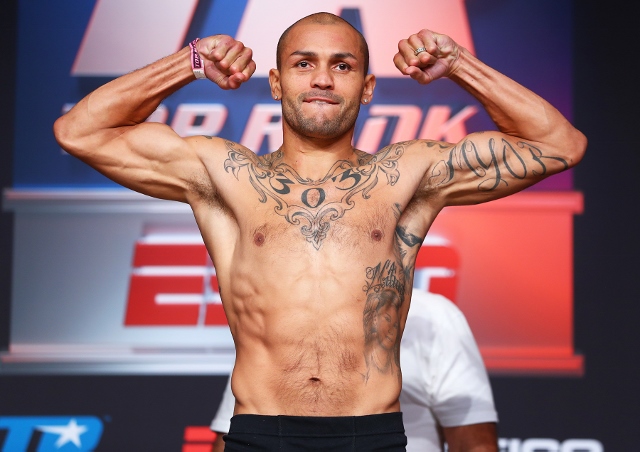 Alvarado (39-4, 27 KOs), a former WBO junior welterweight champion, extended his winning streak to six since Brandon Rios stopped him after three embarrassingly one-sided rounds in their January 2015 rubber match in Broomfield, Colorado. The 33-year-old Cannon (16-14-3, 7 KOs), of Festus, Missouri, lost by knockout or technical knockout for the sixth time in his 13-year pro career.

“It was great to be on this stage again,” Alvarado said. “I felt really comfortable in there with my reconstructed team. I did it again. I’m back. I’m ready for the top level again. It took me some time to get here, but I’m back.”

Alvarado wants to resurrect a once-promising career that was derailed by numerous personal problems, including multiple arrests and substance-abuse issues.

In the fifth fight Saturday night, Omaha light heavyweight Steve Nelson knocked down Oscar Riojas twice in the fourth round and stopped him with 10 seconds remaining in it.

The 30-year-old Nelson (12-0, 10 KOs) first floored Rijoas with a clean left hook. The Mexican veteran got up, only to have Nelson drop him again with a hard right-left combination.

Riojas reached his feet again, but Nelson continued hitting him and their scheduled eight-rounder was stopped at 2:50 of the fourth round.

The 34-year-old Riojas (17-11-1, 6 KOs) lost by knockout or technical knockout for just the second time in 29 professional fights.

:lol1: at that title. Alvarado is shot, I'm sure Arum will sacrifice him to one of his big dogs at some point, but I'd like to see him against Cameron Krael. Alvardo really ought to be with PBC, that's where…

mike 'always high' alvarado is BACK boys trus me on this one. [IMG]https://thumbs.gfycat.com/RemoteInfiniteBufeo-size_restricted.gif[/IMG]

Crawford vs Alvarado in coming this spring. Watch and see! Arum will start drumming this match up

This might be the most shade thrown on a fighter after a win by BS all year. Respect to BS editors on the not so subtle diss. And fair play on the shot. Alvarado isn't a untalented mfer & he's…