“I felt I won the fight but I had to accept the result,” said a remarkably positive Miguel Vazquez just a couple of weeks after he lost one of the year’s more hotly-disputed decisions.

The Mexican lost a split verdict to Lewis Ritson in Peterborough on October 17, his second controversial defeat in the UK following a points defeat to Ohara Davies last year.

“I’m not comfortable blaming the judges for the result, I respect their decision even though I feel it should have been different,” added the 33-year-old. “As soon as I heard there was a split decision, I felt the victory was going to be taken from me.”

He went one further than to sportingly accept defeat, calling it a “sweet loss” because of the aftermath, with the support of the public who thought he’d deserved the win.

“I feel that the Lewis Ritson fight was way more clear [than the decision he didn’t get over Davies]. I felt superior that fight and felt I did enough to get the win. I feel like I still have a lot left. I’m going to give up on boxing when my body tells me to, but right now it feels like I have a second wind, I feel good. I feel like I’ve returned to my own style and I’ve adjusted well and I feel very good. I’m happy to go to England again. Me and my wife really like everything about England and we are happy to go back, I just hope I get more fair treatment next time.” 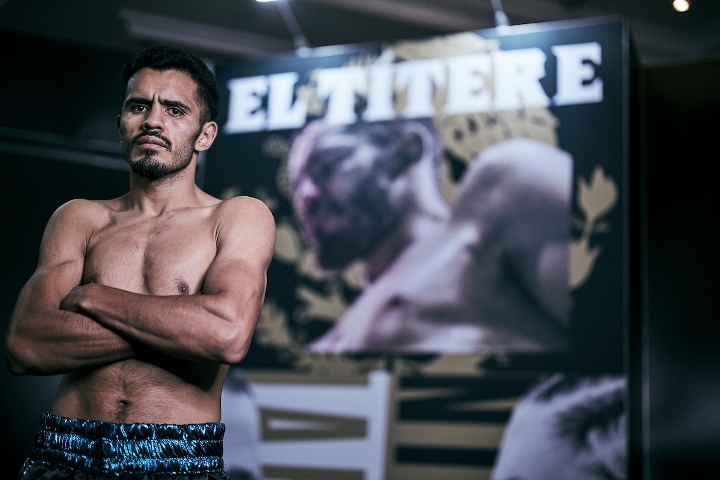 He turned professional back in 2006 and now has won 42 times against 10 losses. He’s faced some of the best of his era.

“My first fight in the US was against Timothy Bradley [2007] and he was a great fighter,” said Vazquez, when asked to name the three best he’s faced. “The second one was Breidis Prescott [2009], he dropped me and it was the first time I had that experience in a fight and the third is Josh Taylor [2017], who I consider a very strong fighter and he was the only fighter who was able to stop me at that point [he was subsequently stopped by Thulani Mbenge].”

Miguel’s first 19 fights were in Mexico but he’s subsequently fought in the US, the UK, Venezuela, Canada and South Africa.

“The best part of my career and the part I’m most happy about is when I became a world champion [IBF lightweight crown against Ammeth Diaz], winning the championship and every time I was able to defend the championship successfully. I defended six times and they were all highlights of my career,” he said.
He’s since boxed as high as welterweight but contends weight-making has never been a significant issue in his career.

“I normally haven’t struggled with the weight apart from when I fought Breidis Prescott. That fight was difficult to make weight, I had to lose 2lbs on the day of the weigh in. That was my biggest struggle, but normally I don’t have many issues making weight.”

Even against Prescott a judge voted against him and Teddy Atlas, covering the fight on ESPN, said Dave Moretti should have been made to explain his scorecard.

Vazquez has learned the hard way that this sport is rough, that the business side is hard to navigate and that you don’t always get what you deserve.

“Yes, of course,” he agreed. “I think all sports are a business in the end. At the beginning of my career I started with pure passion and I felt boxers were treated more fairly in the sense that whoever was the best fighter would get the win. I feel that over time that has changed and it’s become more of a business and the fighters with the better support and teams are favoured sometimes, so I understand that’s a part of the business. It’s a sad reality for boxing at the moment.”

In the aftermath of the Ritson loss he signed a deal with MTK Global and insists he’s as ambitious as ever.

“I’d like to become a world champion again,” he continued. “I’d like to unify a division. I’d like to own the belts of the four major organisations in boxing. I still feel the passion. I’ve still got the fire and until my body says no more I’m going to pursue my dream of doing something greater than I’ve done already.”

And then what? When boxing can no longer pay the bills, what will he do? He has a diner with his wife in Mexico and he wants to expand that business and he enjoys fixing up motorbikes, so he might make a business out of that.

He’s come a long way from the young hopeful who made his pro debut against a fighter named Saul ‘Canelo’ Alvarez, who’s gone on to become the biggest name in the sport.

“I started with a defeat but I’ve done pretty well in my career. We fought twice and the second time I faced him [lost pts 10, when Canelo was 19-0-1] the second loss motivated me to take boxing even more seriously and that’s when I decided to move to the US, put everything I have into boxing and I think I’ve done pretty well.”

He' a real Mexican champ unlike JMM, Nery who I think are cheats.

[QUOTE=fistic flow;20847270]Hearn called the decision a robbery, and the BBBofC pick the judges, so I don't know what you're talking about. It's a problem in general that house fighters of the top promoters get favoured, be that with Warren (Davies/Vazquez),…

[QUOTE=tokon;20847224]The judges for the ritson fight should have been called before the board to explain their scoring. None of them were close, the decision was (another) blatant Hearn funded robbery.[/QUOTE] IIRC one judge was but was cleared of any wrong…

[QUOTE=tokon;20847224]The judges for the ritson fight should have been called before the board to explain their scoring. None of them were close, the decision was (another) blatant Hearn funded robbery.[/QUOTE] Hearn called the decision a robbery, and the BBBofC pick…

The judges for the ritson fight should have been called before the board to explain their scoring. None of them were close, the decision was (another) blatant Hearn funded robbery.