The first fight is scheduled against Yoshihiro Kamegai on August 26 at the StubHub Center in Los Angeles, California. The vacant WBO junior middleweight world title will be at stake.

Cotto is happy to be back at the Wild Card Gym in Los Angeles, training under Freddie Roach's tutelage 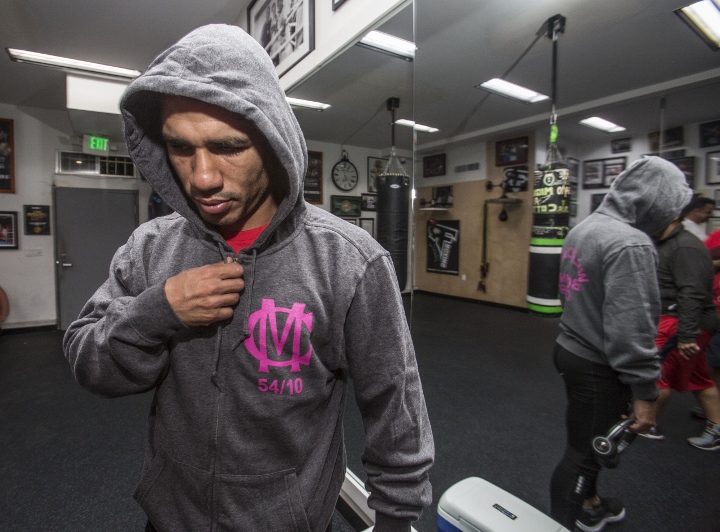 If Cotto wins, there are plans to have him take part in a major fight on a date in December. Both of the upcoming fights will be part of a new promotional partnership with Golden Boy Promotions.

"I'm enjoying my last months in boxing. We are already [looking at] the last two fights to retirement. The popularity that Miguel Cotto was going to acquire in his career, he's has already reached it and right now the fans of Miguel Cotto have been fanatics for a long time," said Cotto to Jose Sanchez.

For this occasion, Team Cotto also took their undefeated prospect Alberto Machado (17-0, 13 KO's). The Miguel Cotto Promotions boxer will fight as part of an August 18th event at the Ponce Feria Complex, which will be broadcast live on ESPN.

"The gym is quite similar to the others I've trained in. I feel good. I'm glad to be here and with a great motivation to prepare myself strongly for August 18," said Machado, who will face Carlos Morales (16-1-3, six knockouts). "I'm training here with Miguel. We are two well-dedicated people, working as a good team and we will continue to do so."

Regarding Machado's inclusion in his entourage, Miguel indicated that - "we are simply showing him how to work at this level and what it takes and the sacrifice needed to go where he wants to go, to be the champion of the world."

Cotto added that Manny Pacquiao's controversial loss to Jeff Horn in Brisbane, Australia from two weeks ago did not affect Roach as a trainer.

"Freddie is a professional in every sense of the word. He knows how to separate matters. He left Manny's business in Brisbane and is now working with us, with a view to August 26," Cotto said.

As usual with Cotto, he has not studied videos of his next opponent.

"I have not seen anything. Freddie will watch the videos with Marvin (Somodio, Roach's assistant) and they will give me instructions to follow in training and then follow them in the fight," said Cotto.

[QUOTE=ironmt;17845420]With a name like MexicanStyle, I can see where your unbiased towards Cotto comes from.[/QUOTE] Speaking on facts and as a hardcore boxing fan... I saw all of cotto's fights and he never really won anything significant without controversy... or…

[QUOTE=Don Pichardo;17847962]you do know that English is cottos second language and he learned it ONLY for his fans. But the real douche here ( you) doesn't seem to appreciate it. you damn bootleg fan.[/QUOTE] You do know what a b!tch…

[QUOTE=Don Pichardo;17847962]you do know that English is cottos second language and he learned it ONLY for his fans. But the real douche here ( you) doesn't seem to appreciate it. you damn bootleg fan.[/QUOTE] He can't say me or I,…

[QUOTE=RememberTUA?;17847308]Miguel cotto thinks Miguel cotto is so cool he talks in third person, what a douche[/QUOTE] you do know that English is cottos second language and he learned it ONLY for his fans. But the real douche here ( you)…