Yeritsyan, who was fighting for the second time in the United States, was the more-effective fighter during the first half of the fight, outboxing and outlanding Sakai. Sensing he was down in the fight, Sakai, who is originally from Japan and now resides in Mexico City, closed the distance, finding some success on the inside with right hands to the head.

In middleweight action, Daniel Lewis defeated Alexis Gaytan (6-5, 2 KOs) of Weslaco, Texas by unanimous decision. Lewis, who represented Australia at the 2016 Olympic Games in Rio de Janeiro, was the busier and more-effective fighter of the two. Scores were 80-72, 80-72, and 79-73 for Lewis, who improves to 5-0, 3 KOs.

In a clash of unbeaten junior welterweights, Abram Martinez stopped Ruben Rodriguez (9-1, 3 KOs) at 25 seconds of the third round. Both fighters had their moments in the opening round, but Martinez (8-0, 6 KOs) scored a flash knockdown during the minute of the second round. Despite the knockdown, Rodriguez continued to fight on, but almost went down from a right hand early in round three. Referee Edward Collantes saw enough, choosing to save Rodriguez from further punishment and waving the fight off.

In the opening bout of the Top Rank card, junior welterweight Elvis Rodriguez (5-0-1, 5 KOs) stopped Luis Norambuena at 45 seconds of the fourth round. The southpaw Rodriguez (4-5-1) used his height and strength to impose his will on Norambuena, who did well in spots, but was countered anytime he attempted to close the distance. 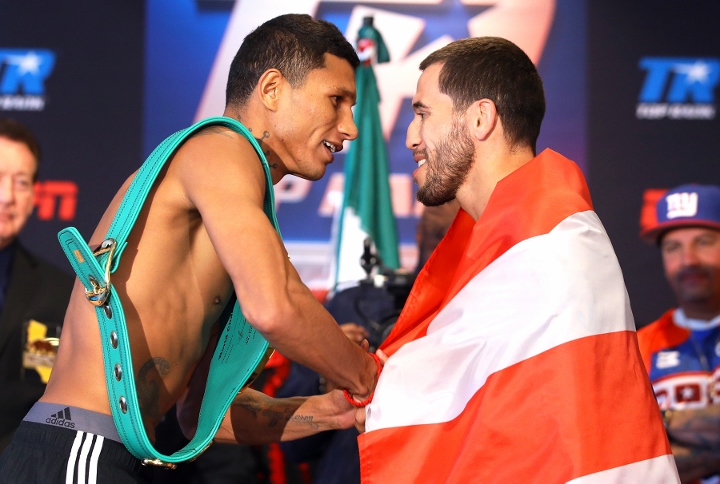 Francisco A. Salazar has written for Boxingscene since September of 2012 and has covered boxing in Southern California and abroad since 2000. Francisco also covers boxing for the Ventura County (California) Star newspaper. He can be reached by email at santio89@yahoo.com or on Twitter at FSalazarBoxing.