Berchelt has stated in the past he would fight any of the world titleholders at 130 pounds, but an all-Mexico clash against Valdez is beginning to look more appealing.

Berchelt battered and broke Jason Sosa down Saturday night, dropping him twice before the fight was stopped in round four before a partisan crowd at Dignity Health Sports Park (formerly known as the StubHub Center). 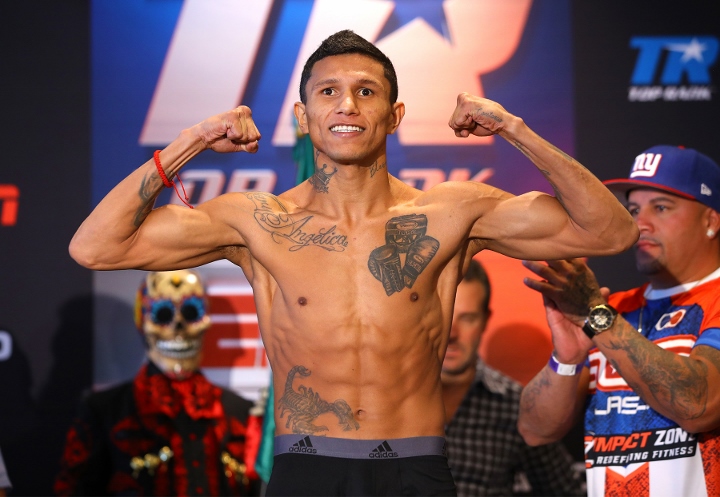 With the victory, Berchelt improves to 37-1, 33 knockouts and successfully defended his WBC junior lightweight title.

The 27-year-old Berchelt, who resides in Merida, Mexico, was making the sixth title defense of his WBC title he won from Francisco Vargas in their all-out war in January of 2017. In his last bout on May 11, Berchelt defeated Vargas again, battering him for six rounds before the fight was stopped to save Vargas from further punishment.

In his last bout on Aug. 10, Sosa stopped Haskell Rhodes in round seven in Philadelphia. The 31-year-old and former WBA junior lightweight titleholder had won his last three bouts since losing by majority decision to Yuriorkis Gamboa in November of 2017.

Sosa played off of Berchelt’s notorious slow start to do well in the opening round, countering to the head and body of Berchelt. It looked like Sosa would carry that over into the second round, but Berchelt’s punching power took their toll on Sosa.

About midway through the second round, a barrage of punches dropped Sosa to the canvas. Sosa beat the count and chose to trade with Berchelt, who landed several vicious punches that seemed to shake the Puerto Rican-American until the round ended.

Sosa was game during rounds three and four, choosing to stand in the pocket and trade with Berchelt. It was not a wise move as Berchelt punished Sosa to the head and body. Even as Sosa’s face began to show the effects of Berchelt’s punches, he still continued to fight on.

With less than a minute left in the fourth round, Berchelt dropped Sosa with a right-left combination to the head, followed by a left hook to the body. Sosa barely beat the count, getting up at nine and fighting back. Moments later, Berchelt pinned Sosa against the ropes, where he battered him with an abundant of punches. To save their fighter from taking further punishment, Sosa’s corner threw in the towel, prompting referee Jack Reiss to stop the bout at 2:56.

“It was an excellent fight tonight,” said Berchelt, who is co-promoted by Top Rank and Zanfer Promotions. “I respect Jason. He’s a great fighter. He came to fight and I have a lot of love for him.”

Valdez is scheduled to face Andres Gutierrez of Mexico in his debut at junior lightweight on Nov. 30 in Las Vegas.

“I thought I had him,” said Sosa, who is co-promoted by Top Rank and Peltz Boxing. “But he’s a great fighter. He got me with a body shot. I got off my game-plan. He just took control.”

[QUOTE=The Big Dunn;20163887]You see why Loma didn’t fight him while he was in the division. Would’ve loved to see that fight at 130 before he left the division.[/QUOTE] Because Berchelt always puts one name prior Loma's? Yes, you are correct!

[QUOTE=kidbazooka;20163726]Berchelt is a beast best in his division imo[/QUOTE] You see why Loma didn’t fight him while he was in the division. Would’ve loved to see that fight at 130 before he left the division.