Miguel Berchelt was twice as nice as the second time around.

A rematch every bit as vicious as its predecessor proved far more dominant for the defending 130-pound titlist, who pummeled Francisco Vargas into submission after six rounds Saturday evening in front of a crowd of 4,424 at Tucson Convention Center in Tucson, Ariz.

Vargas was bloodied and losing visibility with each passing round, prompting his corner to keep the former titlist on his stool at the end of round six. 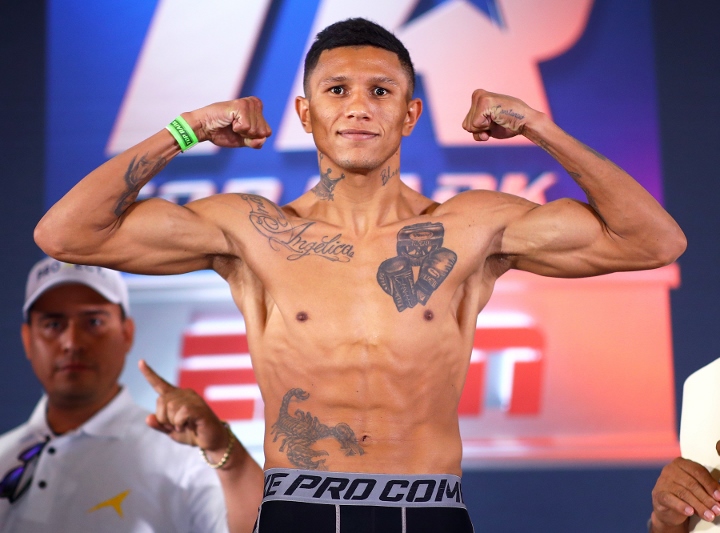 Berchelt was relentless in the fifth defense of the super featherweight title he violently snatched more than two years ago.

Their first fight in Jan. 2017 was entertaining through six rounds before Berchelt pulled away in the second half of the fight to begin his title reign. The defending champion picked up where he left off, intent on making it a war from the outset if only to test just how much his opponent had in the gas tank.

“I did what I said what I was going to do in the ring,” Berchelt stated of his pre-fight promise to force another war.

It was an easy guarantee, as the pair of Mexican sluggers are all gas, no brakes every time they step in the ring. Vargas proved as much in his off-the-canvas title winning knockout of Takashi Miura in their 2015 Fight of the Year and again in a savage 12-round stalemate with Orlando Salido in June 2016.

Perhaps to his detriment, Vargas proved valiant in defeat in his loss to Berchelt two years ago and once again on Saturday. The best he could do was attempt to keep pace with his conqueror, throwing at an exceedingly high rate but ultimately no match for the defending champion’s relentless workrate.

The threat of a stoppage wasn’t evident more so than it was a subtle beating dished out by Berchelt, who averaged more than 120 punches per round, landing 275 power punches in just six rounds.

Vargas’ face reflected the damage inflicted, bloodied by round five and his eyes beginning to swell shut. Saturday’s bout was his first since a one-sided knockout of Rod Salka more than a year ago, the break extended by two months due to Berchelt suffering an injury in postponing their originally scheduled March rematch.

Ultimately, there wasn’t any amount of rest that was going to allow Vargas to become a stronger fighter than his countryman. His corner recognized as much, not seeing any need to let it go past six rounds.

“My trainer did what he’s supposed to do and that’s protect me,” admitted Vargas (25-2-2, 18KOs), whose modest two-fight win streak comes to a violent close. “I thought I could compete with him, but his punches are sharp and they’re strong.”

It’s a lesson quickly being detected by the rest of the super featherweight division, or at least those who have managed to get in Berchelt’s way. All but one title fight has ended inside the distance, the lone exception coming in his first title defense when Miura survived an opening round knockdown to hear the final bell.

Vargas never came close to that point on Saturday, although the fact that he even gave Berchelt a title shot to begin with was enough reason to run it back.

“His corner did the right thing by stopping the fight.”

In a division overflowing with talent, it’s dealer’s choice as to which fight Berchelt would like next. Boxing politics could potentially stand in the way of unification showdowns with unbeaten southpaw slugger Gervonta Davis and sharpshooting Tevin Farmer, but one in-house matchup not only seems within reach, but with the potential next candidate to be revealed as early as by month’s end.

Masayuki Ito defends his version of the 130-pound crown versus Long Island’s Jamel Herring on May 25, live on ESPN from Osceola Heritage Park in Kissimmee, Florida. Expect Berchelt to be among the interested observers.

“I want to prove I’m the best,” insists the winner and still champion. “In (two weeks), it will be Jamel Herring taking on Masayuki Ito. I want the winner.”

Unfortunately Vargas was ruined as a fighter by his team from the the first fight with Berchelt. As I've always said over the years never fight 3 grueling fights in a row. Two at most and typically once you do…

Berchelt is a dog. Fun fight but predictable outcome. I'm not crazy about Berchelt's chances versus Loma, but I think he has a good chin, solid power and a lot of heart to make Loma work. I'd rather see Berchelt…

[QUOTE=Caxcan;19736710]You act like Tank is facing killers. He's fought twice in the past two years against a washed up bantamweight and another guy coming off a loss at a lower weight.[/QUOTE] Exactly. Tank is being protected, yet they want to…