“What do I think? Tough. That would sum it up pretty much. It was a tough fight.”

Micky Ward paused to reflect upon a night that is now etched into boxing folklore. It was 18 years ago this week when he and Arturo Gatti emerged from the brutal trenches in the Mohegan Sun Casino.

They did so with a mutual respect that, over the course of two more battles, saw their spirits forge and friendship flourish. It was after their third and final struggle when they basically morphed into one. Blood brothers captured in time. In the same hospital, separated by only a curtain that was soon removed, both prone on stretches, Gatti said through battered lips and closing eyes, “Mick, you okay?”

Ward, the left side of his face red and lumpy, couldn’t believe the only thing Gatti wanted to know was that his rival was alright.

However you want to say it, Gatti-Ward or Ward-Gatti, the two names soon sounded better together than alone. They were in regular contact, travelled together, Ward became part of Gatti’s team and then trained him for his farewell fight against Alfonso Gomez.

Eighteen years on from the Mohegan Sun, Micky hasn’t watched that most famous first scrap in years but he thinks of Arturo daily. He has a couple of pictures of them up in his home. He’d even named one of his dogs after rival, the recently passed ‘GG’ [Gatti Girl].

“It’s been awhile,” he said of the last time he put on one of their wars. “It’s been more than a year since I watched it. A few people got hold of me this week [about the anniversary] and I got some texts, which was nice. Arturo comes across my mind every day.”

Gatti’s passing left an awful lot of people in boxing incomplete, particularly because he died in circumstances that will always prompt more questions than answers.

One who has not been the same since the wildly popular Jersey-based Canadian passed is his former manager Pat Lynch. They’d been together every step of the way.

“I haven’t watched it [Ward-Gatti I] from first round to the 10th in probably about a year but I have watched round nine and round 10 probably about 20 times over the past month or two,” he smiled.

“I remember just slumping down in my seat in that ninth round and covering my face with my fingers and what vividly stood out was when that ninth round ended was Buddy McGirt, who was actually going to stop the fight, and Mikey Red grabbed him by the shirt and said, ‘Buddy, don’t top it yet.’ He [Mikey] came running down the stairs just as the bell rang to start round 10 and he said, ‘Pat, I don’t like what I just saw in the corner. I saw his lip was quivering a little bit. He takes any punishment at the start of this 10th round then stop it.’ And I said, ‘All right.’

“Then Arturo came out boxing, looking good and he ended up winning that 10th round. But as I was watching it just the other day, that conversation with Buddy just after round nine is what popped into my head.”

“And I remember just praying for round nine to end. When Micky hit him with the body shot and he went down… No one’s really gotten up from a Micky Ward body shot, he got up and I remember saying, ‘Jesus, how much time is left in this round. When is it going to end?’ And as [Jim] Lampley said in the commentary which was so true, ‘[Referee] Frank [Cappuccino], you can stop it at any time’. You really could, and only I think because of Arturo’s reputation did they allow it to go on.” 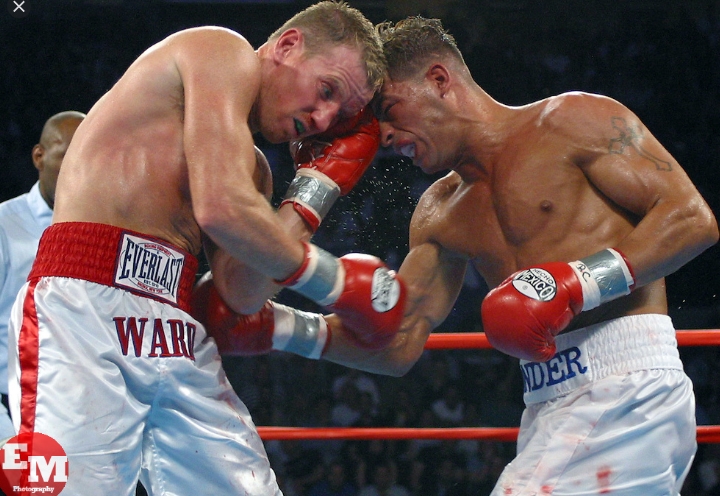 That character was based on a career of never-say-die wars, of times when he battled back from the brink of defeat to turn the tables and smuggle victory from defeat’s pocket.

The three Ward-Gatti fights moved everyone in the business. Even seasoned pros like Lampley, Larry Merchant and Emanuel Steward were continuously astonished by how much the fighters gave of themselves.

Their friendship came at a huge price. From the third fight, Ward’s brain shifted forcing his vision to blur, something that causes him issues even today, almost two decades on.

And he’s spoken openly about the cumulative toll of his entire career. He’s been told he’s got CTE (chronic traumatic encephalopathy) and he’s working with Boston’s elite neurologists on trying to make the rest of his life as normal as possible while he struggles with short-term memory loss and more impulsivity than he’s used to.

But the fighter’s names now go together like Ali-Frazier, Barrera-Morales, Hagler-Hearns and but a few others. One doesn’t quite sound the same without the other closely following.

You can tell that Ward feels the loss, too. He’s open about it. Like a widow who has lost another half, he should have been growing old with Gatti. They should have been on Zoom together, signing autographs together, eating at celebration dinners together… Doing what old rivals do.

A year or so ago, when Marco Antonio Barrera and Erik Morales and Tommy Hearns and Marvin Hagler swapped war stories at the International Boxing Hall of Fame, you didn’t need Micky to tell you what he was thinking; that he had been denied that due to the severed bond. That had been taken away from him.

“It’s funny you say that but I do actually because they have each other and I don’t have that because he’s not here,” Micky sighed. “I do think about that.”

The memories will stay, of course, but the dividends of the hard work they put in will be shared by no one, be it emotionally, financially or spiritually.

“That’s for sure,” agreed Lynch. “When I was at the Hall of Fame and I was accepting for Arturo [in 2013], Micky and I went out that night we were sitting there talking and I said, ‘Man this really sucks, because you and Arturo were supposed to grow old together and be sitting on a porch somewhere having a beer talking about the fights talking and the good times.’ It really, really sucked. You could see it in his eyes when we were up at the wake and the funeral [Micky gave the eulogy], he was hurting by it because they’d become so close. They really did become good friends.”

Fight fans will always be grateful for the gloriously violent Gatti-Ward chemistry but Micky will forever be without his plus one, signing pictures of the two of them on his own for the rest of his days, pining for his friend, wishing he was still around to leave his indelible mark on the pictures as he did on the boxing world.

[QUOTE=Bunch Pag;20575047]Monster fight and round 9 was absolutely brutal. Gatti mini comeback with a few low blows and ward just shrugs it off with his balls of steel.. Compelling viewing and probably my fav round of boxing ever. How they…

[QUOTE=Ant1979;20574955]The Ward vs Gatti fights are as good an advert for boxing as you'll ever see. Just watched round 9 again of their first fight on YouTube. Makes the Rocky fights look like a tickling competition.[/QUOTE] Monster fight and round…

The Ward vs Gatti fights are as good an advert for boxing as you'll ever see. Just watched round 9 again of their first fight on YouTube. Makes the Rocky fights look like a tickling competition.

[QUOTE=archiemoore1;20574838]As I rode the exercise bike in Gleason's gym one day, Gatti's girlfriend was riding the bike right next to mine. I watched Gatti spar. I'll never forget[/QUOTE] Was it a normal workout or was there murder in the air?