So, have you heard?

Michael Nunn is fighting this weekend.

If you think that seems peculiar on its own, you’re probably not alone.

But read on, it gets even better.

Nunn won’t actually be fighting a boxer. Instead, he’ll be matched with another of Iowa’s premier sports celebrities, a fellow by the name of Pat Miletich.

Miletich, for those unaware, was plying his trade in mixed martial arts during the back half of Nunn’s career. And he was no joke. In fact, he was in the UFC while the octagonal promotion was still counting its pay-per-view shows in double-digits, becoming its inaugural welterweight champion at UFC 17.5 in Brazil and defending four times before losing the title three years later at UFC 31 in New Jersey.

And lest either man feel too competitively comfortable, it’ll be neither a boxing nor an MMA fight.

Instead, they’re going with kickboxing.

Nunn has never kickboxed professionally. Neither has Miletich.

Nevertheless, they’ll be headlining a full outdoor show Saturday night on the midway at the Mississippi Valley Fairgrounds in Davenport, Iowa – though all the other bouts will be fists-only boxing. 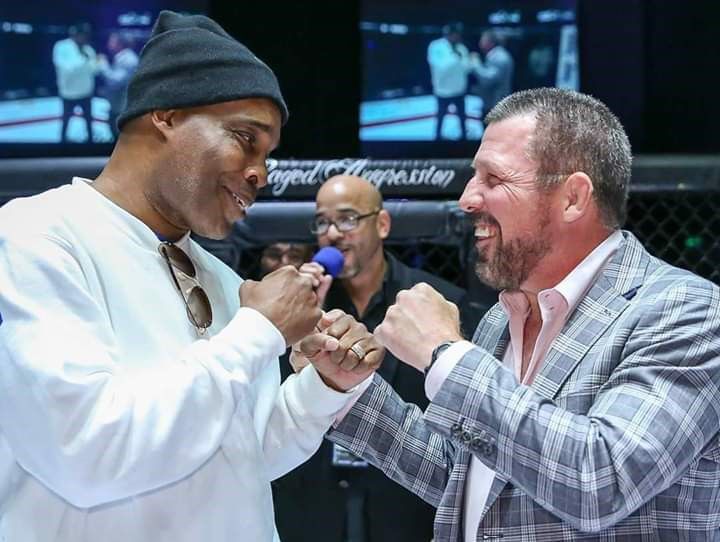 Incidentally, per Boxrec.com, the final fight prior to the main event will match a super welterweight with 12 wins in 14 fights against a 42-year-old with precisely one win – yes, one – in 22 fights.

Last but not least, the card will be put on in front of a crowd.

Possibly a large one. Some have suggested it will draw several thousand.

According to the Quad-City Times, it’s just what a quarantine-weary, unrest-rattled area needs.

“After everything the Quad-Cities and the rest of the country have been through the past several months — a pandemic that has shut down much of life as we know it and race-related protests and violence that have created worldwide anger and anguish — this might be just the diversion we need to bring people closer together,” columnist Don Doxsie wrote last month.

Suffice to say, however, a member of the state athletic commission disagrees.

Vehemently enough to surrender his job.

Indeed, Franklin DeToye, who’s been a deputy commissioner in Iowa for more than 10 years, said he’ll step down if promoter Monte Cox’s show goes on as scheduled.

“I can't speak for other commission members, but I am so ashamed of how this has unfolded, to me it proves our commission has failed to safely ensure the safety, integrity and well-being of not only fighters, but also fans,” he said. “If this event happens, I'm resigning my position because obviously our commission has lost its way.”

DeToye’s career-changing issue isn’t solely with the idea of a 57-year-old fighting a 52-year-old in a sport in which neither have competed professionally. And it’s not only with the idea that the event could take place in front of thousands of people – with no mandates for mask-wearing, etc.

Instead, he said, it’s for a combination of those things, and more.

DeToye said the event – announced earlier this year and subsequently delayed – was called off last month after he consulted with outgoing executive commissioner Joe Walsh, who was already planning to step down after 13 years. He said that decision “didn’t sit well” with Cox, whom he said went straight to the office of Gov. Kim Reynolds. Soon after, DeToye said, the commission’s new leader, Rod Roberts, gave approval for the event “under pressure from the governor’s office.”

The governor’s office did not reply to a request for comment in time for publication.

DeToye said he chatted with Nunn in February and had to help him in and out of a ring at an event because of the ex-champ’s bad knees. Miletich, meanwhile, has competed in several ultra-marathons and, in DeToye’s estimation, could still beat a majority of MMA fighters thanks to his powerful legs.

He said the event is being sold to the public as a matchup of competitive “legends,” but said Cox has claimed elsewhere that neither of them will be hurt.

“You have two of (their) sports’ most-skilled fighters from their days and there's verification they won't get hurt. OK, they're older now. But (I’m) not buying it will be a legitimate fight. My inside sources tell me realistically this will be nothing more than a glorified exhibition.”

As of Monday night, general admission tickets were going for $40 apiece in advance and $50 on Saturday, with $150 for ringside seats at nitrotickets.com. According to the site, pandemic-related safeguards include $1 masks “for fans who didn't bring their own and want one,” ringside seats placed in rows of 10 with aisles of six feet between each and GA seats in rows of 10 with six feet between each.

“I think what is taking place is political,” DeToye said. “Surrounding our city is a state requiring masks (Illinois) and the city next to us the mayor is requiring masks. Our governor went on air and proclaimed no city can require a proclamation to wear masks. The governor further stated only she can do that, and she will not. The promoter as well as (Miletich) have publicly stated even they will never wear a mask, so as you can see this event has taken on a political sense of people’s right to choose over what is safe.”

Not to mention, he said, the perpetual pursuit of profit.

DeToye said Cox announced on Monday, after claiming consistently solid ticket sales, that the fight would also be available on pay-per-view for $24.95.

“I might be crazy, but you can't tell me this wasn't about money over safety,” he said. “I mean, seriously, his ticket sales would have been lower considering $24.95 opposed to $45 to $1,000. I've already received calls from people who are extremely upset, and I would be, too.”

Without an 11th-hour change of heart in Des Moines, though, the show will most likely go on.

Which keeps DeToye up at night as he ponders what could go wrong, particularly at this time of year.

“The best-case scenario is obviously no one gets sick. I can't sleep just thinking about that fact,” he said. “The worst-case scenario is the event takes place, no temperature checks, no social distancing, no masks, and 2,000 to 10,000 fans are at risk. The forecast for this event is the possibility of temperatures reaching 90-plus with heat indexes of near 100.

“Like always for this time of year it is hot, and a good chance of bad weather. If bad weather happens the promoter is saying the protocol would be moving it indoors.

“Two thousand to 10,000 people herded indoors to a fieldhouse used to show cattle is a logistical nightmare. In fact, it would be impossible. With the temperatures there also might be a tendency for people who decide to wear masks taking them off because of the heat, further making the point of how unsafe this event could become.”

I hope Michael Nunn know what he doing. This sound very shady and corrupt. Don't like a little bit. :boxing:

[QUOTE=Liondw;20657264]Oh please people, a mask is not going to protect you, it doesn't cover against 0.06 microns, but ok, wear if you want to. Back to boxing, Michael Nunn was a an excellent, even great fighter, very talented. It's so…

So if a former great slick boxer who threw his life away being a dumb drug dealer wants to end it by becoming a handicap because he has nothing to lose so be it; stop hating on his old broke…

This is actually a really cool fight. Its the old man masters division.

Ouch!!! Pimping out his name to make Pat's win look somewhat good. Nunn is so stiff he can't even raise his leg high enough to kick Pat's calf. He might be able to kick an ankle, but would stubble like…