Michael McKinson extended his unbeaten record to 19 fights as he won a landslide points decision over Martin Harkin in a welterweight ten-rounder on the MTK Global show in Wakefield and then called out domestic rivals Josh Kelly, Conor Benn and Chris Kongo.

McKinson, the WBO’s No 8, was credited with three knockdowns, in the first, second and fifth rounds, but only the middle one seemed legitimate. In the main, McKinson kept moving and working and was a step ahead of Harkin, who lost for the first time in 14 fights.

The Belfast-based Englishman looks a horrible person to box, difficult to find, let alone land on. What he lacks is a knockout punch, as he tends to never hold his feet for long enough to put all his power into his shots.

But he says he is being avoided by higher-profile British boxers and says he would happily fight any of them.

“It felt amazing, it has been nearly a year since I haven’t fought,” McKinson said. “I was a bit rusty. I could have jumped on him a bit more when I made him miss a few times, but he was a dangerous guy, an unbeaten fighter. That’s what I do for fun, I take their 0’s for fun. Granted he was not the likes of Chris Kongo or Josh Kelly, but I believe I can compete with those guys and that’s who I want next.

“I have been in the top ten for a 3-4 years. I’m third in the UK and I am beating these guys with ease. I just want the big names, Martin wasn’t a big name but he is probably more dangerous than half those guys. I didn’t need to take that but I am put in a corner because they don’t want to fight me, but those are the ones I am hungry for.

“I believe I am the best welterweight in the UK and I just want to prove it. I think I have deserved the right to box one of those big names, they can’t ignore me forever.

“There are only really four names in Britain that are worth talking about and that’s Josh Kelly, Conor Benn, I believe Chris Kongo is the most likely one to happen but I believe he is looking for a fight with Liam Taylor, so where does that leave me? They want to talk about fighting each other, they want to call out each other’s names, but where does Michael McKinson come into it? I am the realist one of all. Let’s make it happen.”

McKinson only has two stoppages on his record, but he started sharply enough and had Harkin on the floor in the opening round. While he seemed to stumble after being caught by a left, Phil Edwards, the referee, counted it as a knockdown. There was no arguing with the knockdown McKinson scored in the second round, though, as a right hook caught Harkin on his heels and dropped him on his backside.

Harkin continued to push forward and caught McKinson, with the left hand, but he was getting no luck as another knockdown was counted in the fifth round when he took a knee after being caught by a left hook that was low.

The Scot kept plugging away but McKinson was happy to cruise to a points win. Steve Gray scored it 100-88, Howard Foster 99-88 and John Latham made it 97-91. Phil Edwards refereed. 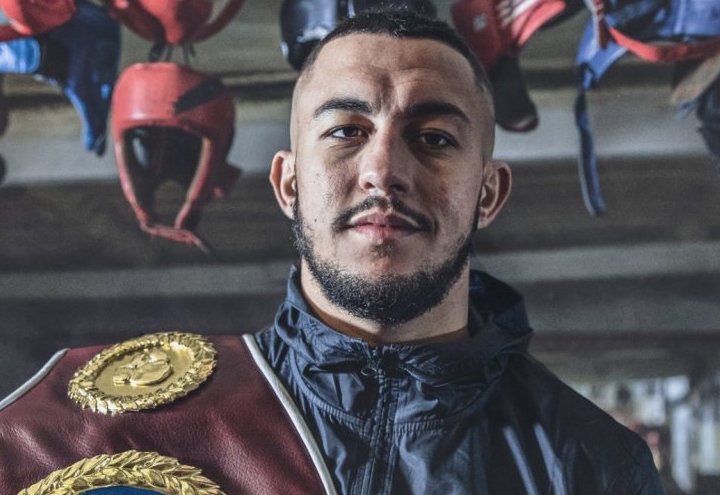 Jay Harris got back to winning ways after losing in a world title shot in February as he came through a dangerous moment to earn a unanimous ten-round decision win over Marcel Braithwaite.

Harris put in an impressive effort when he went the distance with Julio Cesar Martinez for the WBC flyweight title in February and he has his eye on a quick return at world level. This fight had been due to be for the Commonwealth title before Braithwaite scaled well over the limit at a check weight this week.

The Welshman had to recover after being caught by a huge left hook in the fourth round, but mostly outworked his opponent. He is ranked No 5 by the WBC and No 6 by the WBA, but admitted he would have to improve if he were to get another world-title shot. He said he had been affected by the lockdown as his gym had only re-opened three weeks before he received notification of this fight.

“I’m looking to push for more world titles, but I have to perform better than that to mix with world level,” Harris said.

Harris had the better of the early stages, but Braithwaite came storming back in the fourth round when he landed a huge left hook that rocked Harris down to his feet, although he recovered quickly and was on the front foot later in the round.

After that Braithwaite struggled to really impose himself and, while it was always competitive, Harris’s workrate gave him the edge.

“It’s good to have a fight like that,” Harris said. “It was a bit sluggish, I got caught with a lot of overhand rights. My fault and I got punished for it. Credit to Marcel, he was as game as they come. I know the scorecards were a bit wide but it was a good fight.”

“It was a good shot, I felt it and buzzed me a little bit,” Harris said of the fourth-round left hook. “But I and worked through it, composed myself and done all right.”

Former IBF bantamweight champion Paul Butler had his first fight of 2010 and continued a winning run, which now stretches to six fights, as he beat Ryan Walker on points in a scheduled bantamweight eight-threes.

Walker was game and was even coming forward in the last round, but Butler, who is ranked No 3 by the IBF and No 11 by the WBC, was a class apart. He looked sharp and was accurate with his shots, although he never looked like stopping Walker. Probably the closest he came was in the second round after he hurt him with a left hook to the body. Referee John Lathan scored it 79-73.

“It's just nice to be out there, it was a tough opponent so I am glad to get the rounds in,” Butler said. “I was struggling to get the left hook home to the body, so we worked a lot on the right. It worked and opened up a few gaps, though I was a bit off point.

“I’m looking forward to the future. Obviously, I needed them rounds. We’ll wait and see what happens. I’m No 3 with the IBF, hopefully making weight yesterday will push me up to No 2, which is vacant at the moment. I want the big fights, that’s what I am in the gym training for, I’m not 24 or 25 anymore, I’m 31, but I still feel 24 or 25. I’m fresh as they come. I still get ID’d”

The MTK Global show in Wakefield felt a bit cursed after two fights were cancelled following positive Covid-19 tests and there were also technical problems that saw a lengthy gap to proceedings after the opening bout.

That fight featured Paul McCullagh, who got his professional career off to a winning start as the 20-year-old light-heavyweight from Belfast stopped Ben Thomas in the third round of a scheduled four.

McCullagh made a positive start, stunning Thomas with an overhand right in the opening seconds, but he looked heavy-handed and he landed well to head and body, upping the pressure at the end of the second. He culmination of punches landed saw Thomas sink to the floor in the third. He beat the count, but McCullagh landed a body shot to force the stoppage.