NEW YORK – This time, the judges gave Michael Conlan the credit he deserved and then some.

The undefeated featherweight prospect defeated rival Vladimir Nikitin by unanimous decision in their 10-round fight Saturday night to avenge his outrageous Olympic loss three years ago. Though Conlan came on late in their fight, it was Nikitin who seemingly deserved better than he got on the scorecards at Madison Square Garden.

Judge Bernard Bruni scored all 10 rounds for Northern Ireland’s Conlan, 100-90, in what was a very competitive contest before Conlan took control in the later rounds. 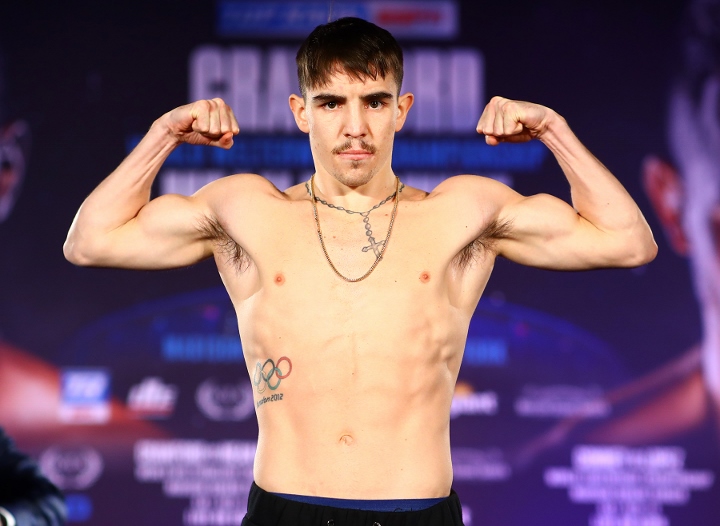 The physical Nikitin got off to a strong start and tried for much of the bout to rough up Conlan. His opponent made adjustments and defended himself better during the second half of their bout on the Terence Crawford-Egidjius Kavaliauskas undercard.

Once Nikitin stunningly was announced as the winner, an infuriated Conlan stuck up his middle finger at the judges.

Conlan and Nikitin were supposed to fight August 3 at Falls Park in Belfast. Their grudge match was postponed four months because Nikitin suffered a biceps injury.

By the 10th round Saturday, it was clear Conlan would exact revenge for the aforementioned Olympic defeat. Conlan continued out-boxing the tiring Nikitin, who was scheduled for 10 rounds for the first time in his career.

Conlan continued building in the ninth round on the momentum he established in the eighth round. He out-landed Nikitin in that round and mostly moved out of Nikitin’s punching range.

Conlan and Nikitin began going toe-to-toe with just under a minute remaining in the eighth round. Their exchange energized the crowd and prompted an animated Conlan to throw up his arms toward the fans after that round ended.

Referee Harvey Dock warned Conlan for a low blow that landed with about 1:35 to go in the eighth round.

The action intensified near the end of the seventh round, when Conlan and Nikitin traded as Conlan was backed against the ropes. That was the most compelling sequence of the fight to that point.

Nikitin connected with a right to the side of Conlan’s head early in the sixth round.

Nikitin landed three hard right hands up top on Conlan in the middle minute of the fifth round. Conlan connected with a couple body shots and a right Nikitin’s head later in the fifth.

Toward the end of a competitive fourth round, Nikitin took a wild swing at Conlan as Dock called for a break. Dock sternly warned Nikitin once the bell sounded to end the fourth round.

Nikitin went down before the midway point of the third round, but Dock correctly called it the result of Conlan shoving him. Nikitin caught Conlan with a right hand that caused Conlan to tie him up with just over 20 seconds to go in that round.

Conlan switched to a southpaw stance almost as soon as their fight started. Other than an exchange just after the midway mark, there wasn’t much action in the opening three minutes.

[QUOTE=Split Decision;20257230]u ungrateful pr1ck[/QUOTE] Gotta save that money after Joshua lost me that bet. Round 5 man ROUND FKING 5!

[QUOTE=rudy;20256695]He should retire now Conlan he is not going to mount to much. like most Irish fighters they struggle at professional boxing. Nothing I seen shows me world class[/QUOTE] Unfair comment about Irish fighters. It's a small country. New York…

[QUOTE=juandabomb;20257019]It was a "meh" performance by conlan..hes ok but i am still not impressed[/QUOTE] Agree, he looked quite average. He might do ok with good matchmaking though as the division looks pretty shallow too.

[QUOTE=tjones1989;20255512]Alright fine, gotta learn how to use this streaming chit someday anway.[/QUOTE] u ungrateful pr1ck

It was a "meh" performance by conlan..hes ok but i am still not impressed