Michael Conlan: I Want To Go Down as One of The Greats

The education of Michael Conlan continues. As the eyes of the boxing world turn to Las Vegas and this Saturday’s clash between Manny Pacquiao and Keith Thurman, Conlan puts in long hours in the gym in London as he prepares for his August 3 meeting with Diego Alberto Ruiz.

He’s just far away from Belfast to keep his mind set on the task at hand, which is scoring his 12th pro victory at home in Falls Park in front of an expected 15,000 fans. That could rival the attendance of this weekend’s return of Pacquiao, making the 27-year-old Conlan quite an important figure in today’s boxing world.

There aren’t too many fighters who can produce those numbers on a consistent basis, and with Conlan on the verge of becoming a member of that select club, there is a pressure to not just succeed on fight night, but to succeed out of the ring as well.

Conlan is aware of all of it, and he is embracing that responsibility.

“I do embrace it and I don’t feel it as pressure,” he said. “I feel it as an honor and a gift to be able to inspire the next generation of kids growing up in working class areas in Belfast. And me coming from a working class area, I can show them that it doesn’t matter who you are or where you’re from, there’s always a light at the end of the tunnel if you dream hard enough and if you stay dedicated. When I was younger, I went off the rails at times but I always came back and found myself in the boxing gym and the boxing ring and it kept me on the straight and narrow. So I like to be that kind of person who would show the kids just like me that you can change things if you just dedicate yourself enough. It’s a huge honor and I’m very grateful.”

Not too many athletes want that role, and it’s understandable. In this day and age, every sentence is scrutinized, every action replayed over and over for the world to see. And if there is a hiccup of any sort, it’s magnified. 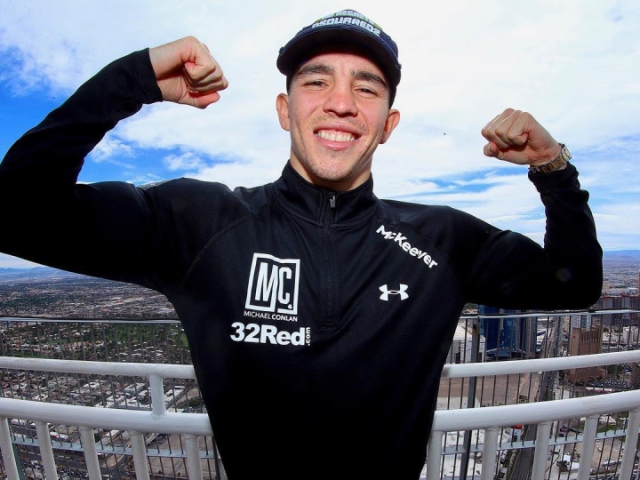 So while Conlan was celebrated for flipping off the judges after his controversial Olympic loss to Vladimir Nikitin, he got a taste of the other side after his St. Patrick’s Day win over Ruben Garcia Hernandez, when his choice of walk-out song – Celtic Symphony - was criticized due to the appearance of an apparent pro-IRA lyric.

Conlan quickly and sincerely apologized, calling it a “misjudgement,” and if his past is any indication, it was just that, as he’s always talked of a unified Ireland and of bringing people together at home as opposed to keeping them apart. But if he didn’t know before, he knows now that people are watching and listening. And still, he will take that weight on his shoulders because when all is said and done, he knows he can be a hero for his nation.

“When you come from a small place like Ireland, especially Belfast, these people see you representing them on the world stage and doing our city and doing our country proud and they want to get behind that,” he said. “Everybody can support that. We are a small nation, but one with a big heart and big power and, to be honest, the support system in boxing in our country is fantastic so I’m grateful for it. A lot of world champions actually don’t have the kind of support I have and I kind of feel for them, but it’s something I get to experience and it’s very special.”

You don’t hear talk like this about the latest world champion from the United States, outside of someone like Terence Crawford, who has become a beloved franchise in his home state of Nebraska. You don’t see too many fighters getting murals painted of them on walls around their city like Conlan does. It makes it clear why he’s taken to training in London, but the way he describes it, it’s not for the reasons you might think.

“Although I love home and I love being at home, sometimes you can get in a groove where everything seems like it’s too easy and too comfortable,” he said. “And I think that for me to improve, I need to get out of my comfort zone, and that’s exactly what I do when I come over here to London. It feels like the sacrifices I’m making are worth it.

“And when I say comfortable, I mean being around my family and being happy too much,” Conlan continues. “I’m too comfortable and too happy when I’m at home. I see my foot kind of coming off the gas a bit. Obviously, with this next fight’s build-up and how big this event is gonna be, it will probably be a bit hectic to get from A to B, but that doesn’t really bother me. I love Belfast, I love the people and I enjoy that whole side of it. It’s just the conflict of how things seem to feel at home is the reason I leave.”

For most of us, being too happy would be a good thing. For a prizefighter, it signals a loss of hunger, a dilution of the “mean” one must have to be successful. Yes, this is a sport, but it’s also a fight, and once a fighter forgets that, he’s lost an edge that he may never get back.

So even though Conlan lost the chance to face Nikitin when the Russian was forced out of the bout due to injury, he will get a fight out of the 21-2 Ruiz, whose mere passport as a citizen of Argentina proves that it could be a long night for the Irishman.

That alone keeps Conlan focused and hungry. But there’s more. And it has nothing to do with August 3.

“I want to create history as a professional and I want to go down as one of the greats of boxing,” he said. “All these fights on the way, they mean something, but they’re just steps along the ladder, preparing me for what’s to come. The atmospheres I’m experiencing, many world champions have not experienced it and probably won’t experience it. So I know when the time comes and they’re under the lights, people can fold under the pressure. But from the start of my pro career I’ve been under the lights and I’ve been in the big media spotlight, so I know I can handle that and I want to do big things in boxing. I want to be Ireland’s best ever male professional fighter, and I believe I’m on track.”

And if it ever gets tough for him to handle, he knows Ireland – his 12th man - will back him.

“It (the fan support) gives me an extra edge, an extra percent over your opponent, and that’s unbelievable,” Conlan said. “In a game where a little percent means so much, if you have that fan base behind you, it gives you that edge and it’s special. Come August 3rd, it’s going to be an absolute cauldron. It’s going to be really crazy.”

His claim of wanting to go down like one if the greats made me think back to the Tyson Douglas fight.

He's going to be fight cans for the next several years sticking with Top Rank. Their cash cow Crawford's resume is a joke.

I have been to 3 of his fights and want him to suceed but he has a ways to go before he is in the upper echelon. Was looking forward to the Nikitin fight but now it's Diego Alberto Ruiz.…

Not trying to hate, but this guys best asset is being Irish. Haven't been impressed so far. Best of luck to him tho

I'm Irish but I'm not sure if Michael can do it, would like to see it but I don't think so.