Michael Conlan Hopes To Fight in Belfast on June Date

The Irish featherweight again fully justified the hysteria surrounding his career as he made light of the step up in level - dropping Berna twice before the referee halted the action less than a minute into the second session.

At the climax of a week that saw the Irish dominate the Cheltenham Festival and complete a Six Nations Grand Slam by beating England at Twickenham, Conlan continued the global St Patrick’s Day celebrations with a brutal display. 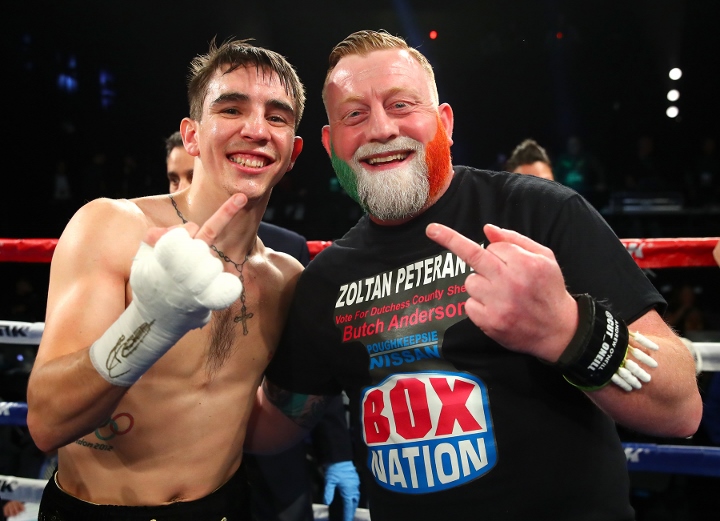 Headlining the event in the wake of two world title fights, the 26-year-old remained fully focused in the eye of a storm of noise - evading well-lubricated well-wishers with the help of his security guards as he followed bagpipe-players to the ring.

Once in there, the former world amateur champion was all business - switching southpaw almost immediately and soon producing a withering backhand left to the solar plexus to crumple Berna (15-3-KO12).

The Hungarian bravely rose to his feet to see out the final few seconds of the opener but was felled again by a cuffing left hook early in the second and took several meaty shots before referee Eddie Claudio jumped in to save him from further punishment.

With the party moving towards full swing around him, Conlan said afterwards: “It meant a lot to me. I wanted to come in here and put in a great performance - a better performance than last year. I think I did.

“I want to fight back in Belfast. There’s talk about it being in June. Look at this crowd. We’ll sell out any arena in Ireland and we’ve got to get back there.

“I wanted to take this guy out and show I’ve improved in my first year. I’ve only been with my new coach a little while but I feel I’ve improved a ton.

“He kept committing and as he dipped down, he brought his hands up to block his face. Once I turned southpaw, I felt that shot would be a comfortable one for me to land. The first one I threw sucked the life out of him.

“I feel I’ve improved all round. I’ve got the feel for professional boxing. When I turned pro, it was like a sprint for me and I wanted to take them out rather than break them down.

“I left my old trainer Manny Robles and it was nothing personal - it was just logistical for my family - and now I’ve linked up with Adam Booth and I feel I have a great connection with him."

Watch the Selby-Conlan fights. Andrew absolutely schools him imo. Anyone with a good amount of movement and decent combinations should be able to deal with Conlan. At the highest level imo. Conlan will still be a VERY good boxer, and…