That’s exactly what Coffie did during the fifth round of his six-round heavyweight fight against Luis Pena. Coffie dropped Pena after landing three straight left hooks early in the fifth round and finished him shortly after the action continued at Microsoft Theater in Los Angeles.

Referee Thomas Taylor stopped their fight at 1:35 of the fifth round, with a staggered Pena still on his feet. Brooklyn’s Coffie (10-0, 7 KOs), who served eight years in the Marines, previously dropped Pena with a left hook in the third round. 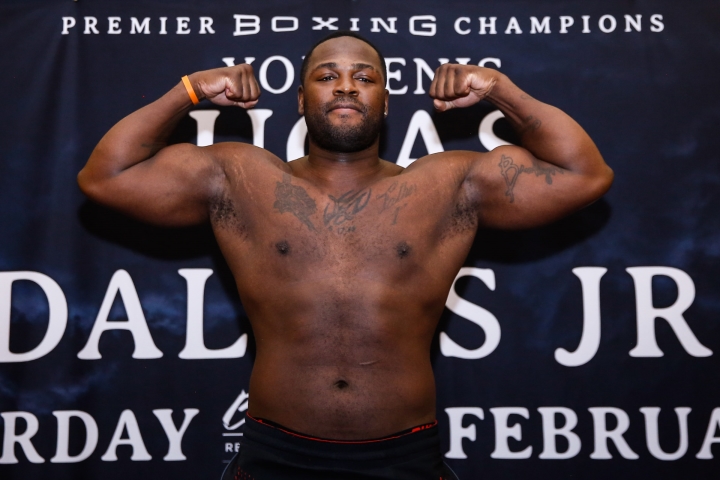 The 6-feet-5, 279-pound Coffie’s victory came in the first fight FS1 televised after Jamal James out-pointed Thomas Dulorme in the main event. The 5-feet-11, 232-pound Pena, of Ventura, California, lost for the first time as a pro (6-1, 6 KOs).

Coffie went to a southpaw stance as soon as the fifth round started and promptly landed a straight left hand. With about 1:55 to go in the fifth round, they traded left hooks and Pena clearly got the worst of that exchange.

Pena went down to one knee, and then his gloves and knees. Pena got up by the time Taylor’s count reached five, but he remained hurt.

Coffie caught him with a flush left hook several seconds later that snapped back Pena’s head and knocked him backward. That’s when Taylor stepped in to save Pena from taking unnecessary punishment.

Coffie nailed Pena with a short, left hook with 1:12 to go in the fourth round. A determined Pena still kept trying to get inside on Coffie to trade with him in that fourth round.

A left hook by Coffie clipped Pena, who missed a right hand, and it caused Pena to use his left glove from going down 15 seconds into the third round. Taylor correctly called it a knockdown and counted to eight before the action resumed.

Pena came back to make the remainder of the third round competitive. He hit Coffie with a right hand to the side of Coffie’s head in the final minute of that third round.

Pena pushed Coffie backward, into a neutral corner, early in the second round, but he couldn’t land any clean shots. Coffie hit Pena with a straight left hand with just under a minute remaining in that second round.

Pena caught Coffie with a right hand, and then a left hook, just before the first round ended.

Good to see a fellow military Veteran in the sport is that’s doing well. Hopefully he fights 3-4 times a year and keeps learning. At his age this kid isn’t getting any more spry.

[COLOR="Green"]Extremely impressed with Coffie, will pay close attention to him from here on out. A switch hitter with some slickness, and meanness like him is a good addition to the already scorching hot HW division.[/COLOR]