Mia St. John Comes Clean on Use of PEDs in Estimated 20 Fights

In a very revealing interview, former world champion Mia St. John came clean about her use of performance enhancing drugs - in a career that spanned from 1997 to 2016.

St. John retired with a record of 49-14-2, with her last fight taking place in April of 2016 when she knocked out Lisa Lewis at the The Trusts Arena in Auckland, New Zealand.

St. John recently came under fire on social media, when she tweeted that every boxer in general was using performance enhancing drugs -  "Everyone does it & everyone in boxing knows it.” 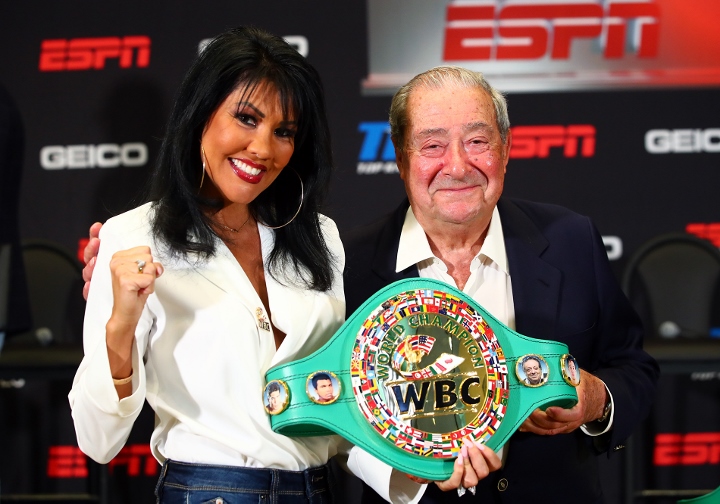 After making her comment, several pro fighters lashed out in her direction.

St. John told the Los Angeles Times that during her career she used steroids such as Winstrol, Deca Durabolin and Anavar, and banned masking agents and weight-loss substances for an estimated 20 fights on her record.

She refused to reveal the exact fights and also stepped away from naming other boxers who were using PEDs.

“I hate it when other fighters put down other fighters for something we all know is rampant in boxing,” St. John told The Times. “I never once tested positive, and I’ve never told anyone this, but now that I’m retired I feel like it’s OK.

“It’s not right, but what I’m trying to say is that it’s a vicious cycle we get caught up in. You’re in a gym. You’re in a big camp. Obviously, I was part of the biggest shows of my time.

“So when your camp is doing it, it’s going around the gym, your sparring partners are doing it, you feel compelled — ‘Oh my God, I have to do it’ — to keep up with everybody. It’s a mind trick. And once you’re on it, it’s so hard to come off because it becomes very addicting. That’s what people don’t know. I’m not going to say what fights [I used] because then people can trace back to what cards I was on, what camp I was in, who I was training with … I would never out anybody."

St. John also backtracked a bit on her statement that every fighter in the sport is using performance enhancers.

She believes the use of PEDs is still very widespread in the sport and needs to be addressed.

“Obviously, it’s not every single fighter, but there were a lot. I saw so much of it in my career and I don’t mind coming out with this now because it’s a serious issue that our sport needs to address," St. John said.

“I was tested many times. There’s many methods to get around it. Just because you didn’t get caught doesn’t mean you weren’t doing it. It just meant you didn’t get caught. I did my homework. They gave us a whole list of what not to do and I knew a lot of stuff I was doing was on that list. I did everything I could to mask it — masking drugs, catheters with other people’s urine — and then the rest is up to luck."

[QUOTE=BIGPOPPAPUMP;19016332]In a very revealing interview, former world champion Mia St. John came clean about her use of performance enhancing drugs - in a career that spanned from 1997 to 2016. St. John retired with a record of 49-14-2, with her…

[QUOTE=ShoulderRoll;19017917]Of course not. But that is why commission testing wasn't catching anyone in her day.[/QUOTE] Commission testing won't catch many nowadays either when it is primarily still only immediate pre- and post-fight. Random 24/7/365 with penalties for missing test would…

[QUOTE=nacho daddy;19018129]THANK YOU!!!!!! I have been shouting this from the rooftops[/QUOTE] As have I in numerous posts at these forums!

[QUOTE=pasawayako;19018993]Well floyd combined USADA and ariza. :lol1:[/QUOTE] Pac will turn to religion (again) and god will tell him to confess ;) like Mia

PEDS in america today are more advance than the any test. That's why most athlete in america pass the test with ease.