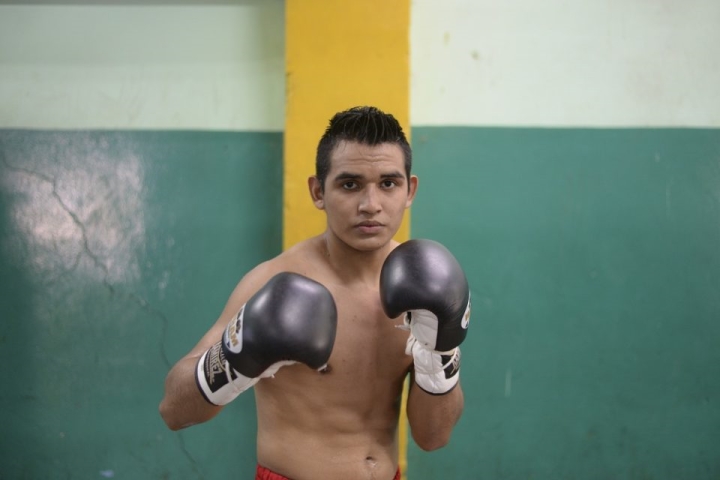 Lopez, who is originally from Managua, Nicaragua and now resides in Miami, slowly broke Reyes down in each round. As the bout progressed, Reyes’ punch output would drop as Lopez connected to the head and body with two and three-punch combinations.

Sensing he was down in the fight, Reyes pressed the fight during round five, but he mostly threw arm punches, several of which landed on the arms of Lopez or missed entirely. Sensing he was weakening, Lopez went on the attack to being round seven, punishing Reyes against the ropes until referee Samuel Burgos saw enough and stopped the bout at 38 seconds.

Lopez, who made his pro debut two months before his 18th birthday, is ranked No. 5 by the WBA.

Reyes drops to 20-5-1. Friday night was the first time in his career the Ciudad Obregon, Mexico resident had been stopped.

Welterweight Harold Calderon remained unbeaten by knocking out Argentina’s Marcelo Bzowski in the ninth round.

The southpaw Calderon (20-0, 13 KOs) rained punches down on the shorter Bzowski (10-9-3) throughout the fight. As the bout progressed, Calderon’s punches began to take their toll on Bzowski, who attempted to continue trading with Calderon as he fought with his back against the ropes.

The end came in round nine as a two-punch combination dropped Bzowski midway through the round. Bzowski fell face-first and struggled to get up, but was counted out at 1:41 by referee James Warring.

Bantamweight prospect Joahnys Argilagos (2-0) had to grind out a split-decision victory over Juan Centeno.

Argilagos, who won a bronze medal for Cuba at the 2016 Olympic Games in Rio de Janeiro, was the better technical fighter, but Centeno came on strong during the second half of the fight. Centeno (3-3-1, 1 KO) closed the distance between the fighters in hopes of trading toe-to-toe in the center of the ring during the final two rounds.

Velazquez came to fight and had his moments in spots, but Ruiz was the more-effective fighter, outboxing Velazquez (11-6, 3 KOs) and landing several combinations throughout the fight.

Fringe junior lightweight contender Mark Bernaldez (19-2, 13 KOs) of the Philippines dropped David Berna (17-8, 16 KOs) twice in the opening round, prompting referee Sam Burgos to stop the fight at 2:43. Berna, who resides in Budapest, Hungary, has now lost six of his last eight rounds.

In the opening bout, lightweights Daniel Placeres (8-1-1, 7 KOs) and Demetrius Wilson (2-13-1) of Saint Louis fought to a split-decision draw over four rounds. Each fighter won 39-37 on a judge’s scorecard, while the third judge scored the bout 38-38.