Thabiso Mchunu vowed there would be no repeat.

Revenge was on his mind, and revenge is what he got as he pounded Tommy Oosthuizen in as superb a display of boxing as there’s been in a South African ring, at Emperors Palace on Saturday night.

Mchunu was up on his toes, oozing confidence, as he took the fight to the taller Oosthuizen, whipping in slashing left hands that bamboozled his fellow southpaw in their cruiserweight rematch.

Gone was Oosthuizen’s slick movement and sharp jab, replaced by a laissez faire attitude and an inability to adjust to Mchunu’s swarming game. 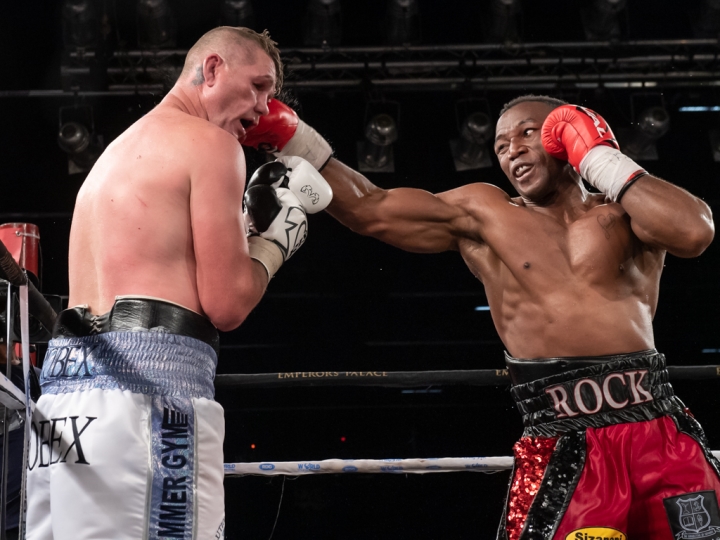 It brought Mchunu back into the cruiserweight picture in a big way, while Oosthuizen will have to have a long, hard think about where he wants to go. He is an outlandish talent, but on the evidence of Saturday, complacency and laziness look to have strangled his talent.

Mchunu pressed from the off and by the third was landing heavily. He probably couldn’t believe his luck after Oosthuizen proved so elusive three months ago, his punches landing often.

Oosthuizen’s machismo meant he stood and traded inside with Mchunu, a poor strategy given Mchunu’s excellent game at short range. The slow-footed champion was suckered into fighting Mchunu’s fight and simply never adjusted, getting nailed by shots he should never have.

Oosthuizen was uncharacteristically sloppy and paid for his nonchalance by eating a ton of leather. Indeed, his biggest virtue in the 12-rounder might well have been his chin.

Mchunu’s output was much better than the first time they fought and he boxed with some style to break Oosthuizen down. By the 10th, “Tommy Gun” looked spent of energy and ideas, his timing having gone the way of his ambition.

Mchunu banged away relentlessly and when his arm was raised at the popular casino venue, there wasn’t a murmur of dissent.

Revenge had been ever so sweet.

In the co-main event, IBO welterweight champion Thulani Mbenge took his time before dismantling the challenge of Mexico’s Miguel Vazquez in the first defence of his championship.

The end is nigh as Miguel Vazquez feels the full effects of Thulani Mbenge’s body punching.

The South African started hot, coasted through the middle rounds and then dropped the bomb in the ninth with a sickening body shot that signalled the end of Vasquez’s energetic challenge. Vazquez made it through the round, but decided that discretion was the better part of valour and opted not to come out of his corner for the 10th.

Both started fast, but Mbenge was quicker, although they both settled into a comfortable rhythm, looking for openings. Mbenge looked best when he attacked the body, his faster, slicker punching catching the eye of the judges.

Vazquez was as tough as advance warnings had predicted and the canny old warrior knew how to look after himself as it gradually dawned on him that Mbenge had his measure. He held and he pivoted and occasionally had success with his attack, but without real power, he had little means of stopping the onslaught. When the end came, it was confirmation that his best wasn’t enough.

It was an important win for Mbenge, who has ambitions of cracking the American market. With more experience, he just might.

[COLOR="Magenta"]Sounds like the complete opposite of the first fight. I had Tommy clearly winning the first fight in a close fight if that makes sense. His footwork was impeccable. He's fallen back into his bad habits.[/COLOR]