McGuigan: Postol is a Very Dangerous Fight For Josh Taylor

The Tartan Tornado will become the mandatory challenger for the WBC world super lightweight title if he wins on June 23.

Barry McGuigan has hailed Josh Taylor as “one of the best talents in global boxing” as the Scot prepares to take on Viktor Postol.

It has been a rapid rise for the Tartan Tornado, who is just one fight away from a world title contest despite having just 12 professional bouts to his name. 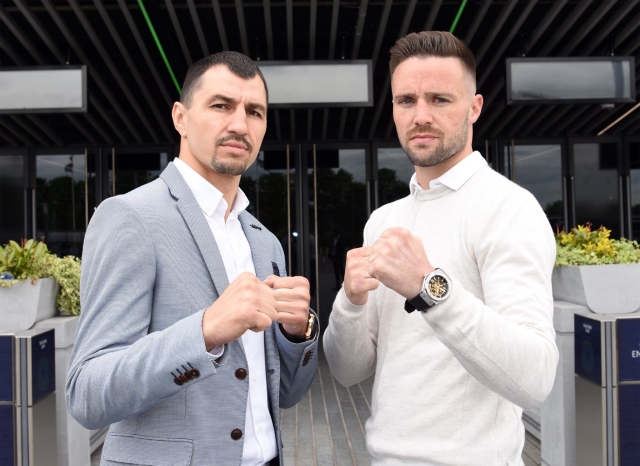 A win against the experienced Postol on June 23 would make Taylor the mandatory challenger for the WBC world super lightweight title.

And former world champion McGuigan, whose Cyclone Promotions team look after Taylor, believes the 27-year-old has much more to show as he continues his journey to the top of the sport.

“Look at the likes of (Vasyl) Lomachenko, and the way he moves from southpaw to orthodox is very quick. Taylor is similar, to be honest he’s not as good as Lomachenko but he has an awful lot of his traits.

“It will be an exciting number of years following Josh Taylor. I believe he will win the world title, but this is his hardest fight.”

Since a devastating knockout of Ohara Davies last summer, Taylor has got past Miguel Vazquez and Winston Campos in less dramatic fashion.

McGuigan believes there is more to come from Taylor and has tipped him to beat former world champion Postol.

“Without doubt (there is more to come). You haven’t seen what I have seen, and he is getting better.

“I learn things about him every day. He can be sloppy at times but the majority of the time he is sensational and very adaptable.

“This is a very dangerous fight but I believe he will win it and win it in dramatic fashion. I think it will be really dramatic.”

McGuigan believes Taylor could forge the way for future Scottish talent, so long as he gets past what is seen as the biggest test of his career to date.

He said: “He’s certainly one of the best fighters I’ve ever seen in Scotland, and I believe he will enliven the boxing game up here, and he’s already doing that. They are inspired by him.

“This guy (Postol) will be dangerous throughout the fight so he has to be on point and in shape, and I hope we will have a great fight. I believe Taylor will win and win spectacularly.”

He added: “This is the toughest fight he will ever have, and we had to take it because do we want him to hang around, linger and not take a fight that will put him in a position to win a title? No.

“There is a lot of jeopardy because this guy is very dangerous.”

[QUOTE=GlassJoey;18796952]I though they were not allowed to talk about it until the official announcement. Didn’t Russian TV confirm him already?[/QUOTE] Yeah they did, when they were talking about Troyanovsky. Prograis has said also that he understands Taylor will be in…

[QUOTE=The Smash;18796275]One fight at a time and all that, but I'm concerned that they're not even hinting at joining the WBSS.[/QUOTE] I though they were not allowed to talk about it until the official announcement. Didn’t Russian TV confirm him…

[QUOTE=The Smash;18796275]One fight at a time and all that, but I'm concerned that they're not even hinting at joining the WBSS.[/QUOTE] they are not joing the WBSS, dont blame them the finals are shambles now

One fight at a time and all that, but I'm concerned that they're not even hinting at joining the WBSS.