McGregor Motivated Ahead of All-Scottish Dustup With Farooq

He has been tipped for the top since he made his pro debut one month shy of his 21st birthday. Now, Lee McGregor (7-0, 6 KOs) faces the biggest test of his credentials on Saturday night in Glasgow, Scotland.

It’s East meets West in a classic all-Scottish showdown pitting McGregor, 22, from Edinburgh, against Kash Farooq (13-0, 6 KOs) from Glasgow, in a winner takes all fight for the British and Commonwealth bantamweight titles at a sold-out Emirates Arena in Glasgow. 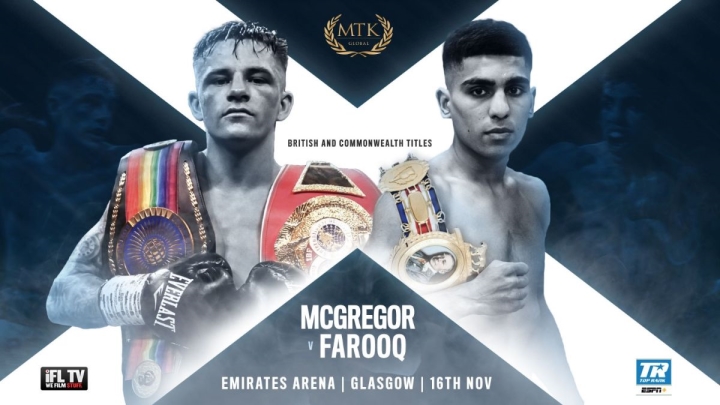 Farooq, 23, the outright British champion after three successful defenses, will be the home fighter while McGregor will be invading with his own army of fans after selling a large number of tickets.

McGregor, the Commonwealth champion after defeating Thomas Essomba last October, says this is the right fight at the right time for him and cannot wait to put everything on the line.

“That’s why I’m in this game,” McGregor answered when Boxing Scene said that the likes of himself versus Farooq are the type of 50-50 matchups that the fans want and crave. “Me and Kash could have kept on going. We’ve already got good names for ourselves, [are] making good money and [can] still be this star or whatever they want to call us.

“One of us is potentially going to lose a bit of that and that’s why I’m so excited for it because it has given me that fire in the belly in training. The buildup, the fight, it’s all different. I feel so good, happy and a happy fighter is a dangerous fighter and this fight is coming around at the right time for me definitely.”

While not saying the exact words, McGregor feels he has a point to prove.

Farooq has been on an upward curve lately, has momentum on his side, appears to be punching harder with each fight and his career has been a hive of activity since winning the vacant British title in September 2018. The one-round blast out of Iain Wilson kicked off a run of five fights and five wins in fourteen months.

Things have been patchy for McGregor in that time. Since beating Thomas Essomba, his own momentum has somewhat stalled. Having switched coaches from Shane McGuigan to join Grant Smith’s stable in Sheffield, the Scot has went from a six-rounder against Brett Fidoe to an all-Scottish scrap, filled with needle and dislike, against Scott Allan. It was a fight that he won convincingly in the end but still took more shots than he probably should have.

“It was frustrating,” said McGregor of the seven-month period of inactivity from winning the Commonwealth title to getting back in the ring for a six rounder.

“I won the Commonwealth title, I got momentum, I was on a roll and my name was out there and people were starting to take notice. I changed teams and the whole process made me be out for longer than I expected. It’s things you have to deal with as a fighter. It’s experience gained. That’s never going to happen all the time but you live and you learn. It wasn’t great for me but I’m a professional. I’ve got great people around me and here I am back to doing what I love. I’m busy, I’m headlining shows, I’m taking part in one of the biggest all-Scottish fights in ten years.”

McGregor v Farooq brings back fond memories of other all-Scottish dustups featuring the likes of Alex Arthur vs. Ricky Burns, John Simpson vs. Paul Appleby, Arthur vs. Craig Docherty before going even further back to the heyday of a 15-round British title fight involving Jim Watt and Ken Buchanan.

McGregor has the utmost respect for his unbeaten opponent and has nothing but praise for his ability and personality. He describes them not as friends but as “boxing friends” having once shared a room together while away on amateur international duty representing Scotland a few years ago.

"I’ve got a lot of time and respect for Kash,” he said. “I remember we travelled down to Wales in 2015 or 2016. It’s mad because there’s a photo going about of the two of us, we both won our fights in Wales and we got our photo taken together. Scotland ended up winning the duel. I’ve been about him and I’ve got a load of time for him. I’ve sparred rounds with him. There’s no bad feelings towards him. I really like the guy and I think he’s a smashing lad and you can’t really say a bad word about him. For this fight it’s strictly business.”

The fans, the media and those in the trade are finding it hard to split the combatants for Saturday night. Ask for a prediction and you’ll get one but it isn’t with the greatest of conviction. There are strong arguments for both.

McGregor is surprised at how many are doubting him and is keen to remind everyone that this is a step up for Farooq as much as it is for himself.

“With the greatest of respect to his performance against the likes of Kyle Williams I am not Kyle Williams,” he said. “Since what he did to Jamie Wilson people have taken notice of him and have been raving about him which is understandable. It’s incredible what he’s done, how quick he’s won the belt outright. But these guys are not me and I’ll show that. When he’s in with me he’s in with a big strong bantamweight who’s not gonna back off, who is fighting for his life and you’ll need a train to stop me because that’s how hard I’m training.”

And while McGregor can be all-action and can neglect his own boxing ability, he says this time there will be no all guns blazing approach which he has been guilty of in the past.

McGregor says he’s never had a feeling or a sense of excitement for a fight like this before. He has taken himself away from the distractions of Edinburgh to a homely flat in Sheffield to train alongside the likes of the Edwards’ brothers Charlie and Sunny under Grant Smith as well as his son Dalton.

Time away from the Scottish capital includes time away from McGregor's daughter who turns one this week. She is the apple of his eye, unquestionably. His love for her shines through during the interview and while the sacrifice is challenging, as it is for most fighters, it is because of the rewarding life that may well reveal itself to his family should he win against Farooq and then go on to challenge for European and potentially world honors.

“I can’t imagine life without her,” McGregor said about his little girl. “Everything I do is for her. I’ve made promises to my mum, my grandpa [who have passed away] and I do it for them as well but my main reason is for my little baby. To provide for her and make sure she has a good life and that’s why I’m putting my body through hell.

“There’s no love like that of a father and daughter. I like to spend as much time as I can with her. Life is precious. I know I’m away training hard but it gives me that hunger, the desire to bite down in training knowing I’m away from her, missing her but that’s why I’m doing it. It’s hard but it’s worth it when you win, you get the belts and you can celebrate with your friends and family.”

[QUOTE=Gideon lock;20192370]Hate to say it but farooq doesn't exactly sound Scottish does it.[/QUOTE] Plenty of asian dudes ended up North of the border, man, though I gotta admit even as Mancunian I did find it slightly jarring the first few…

no post-fight report? should've asked me, i would've done it for a quid

I scored this without the sound on. Had McGregor a clear winner, much much better boxer, more skilled, much better movement and punch selection. Only put the volume on after the final bell and was seriously surprised to hear the…

Kash was fighting McGregor and MTK. Anyone could see he was the better fighter but let's hope someone signs Kash because he's one of the most talented fighters in Britain right now. McGregor probably won't make it to alphabet strap…