Mayweather Warns Stevenson: It's Not The Same at 40-Years-Old

Stevenson, a native of Blainville, Que., weighed in at 173.4 pounds while Jack, a Las Vegas-based Swede, tipped the scales at 175 pounds ahead of Saturday’s main event at the Air Canada Centre.

The two men exchanged words as they squared off for photographers after the weigh-in but were both smiling as they made their point. Former world champion Floyd Mayweather, a co-promoter and Jack-backer, stood close by to ensure they didn’t get physical. 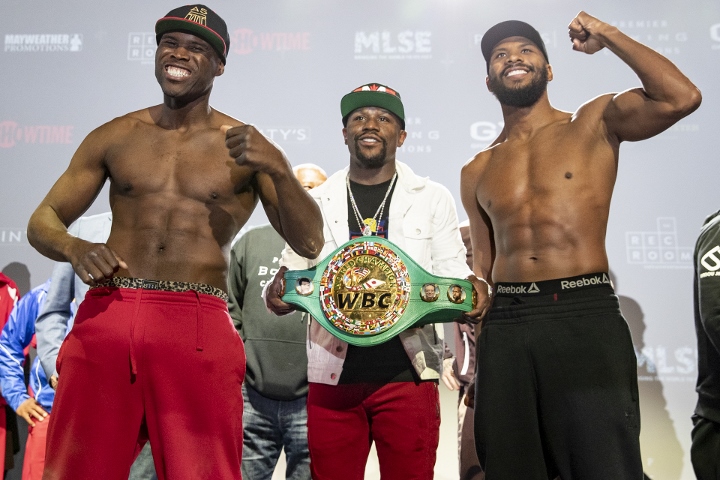 It will be the ninth title defence for Stevenson (29-1 with 24 knockouts). Jack (22-1-2 with 13 knockouts) is a former WBC super-middleweight and WBA light-heavyweight title-holder looking to add to his resume.

The Air Canada Centre will be configured for an audience of some 6,000 for a card that suddenly shifted to Toronto from Montreal less than a month ago.

Retired five division world champion Floyd Mayweather, who promotes Jack, explains that at 40-years-old he doubts Stevenson is the same fighter that he was years ago.

Mayweather, who retired last year at 40, says his body was far from what it was when he was a few years younger.

“The matchup is a 50-50. Anything can happen in the sport of boxing. All it takes is one shot. One thing we do know about Badou Jack is he can give it and he can take it. He’s not going to back down from any opponent," Mayweather said.

“Adonis has always been a solid fighter. Adonis is world champion for a reason, and Badou isn’t overlooking this guy. Stevenson is in his position for a reason.

[QUOTE=gdub27;18831638]To me, it’s not about cherishing one belt, I prefer guys who want to dominate their weight class and leave no question as to who’s the best. I’ve been a boxing fan for over 30 years so I know fighters…

[QUOTE=gdub27;18783820]I hope Jack wins just because it feels like Stevenson is holding that belt hostage.[/QUOTE] And Jack likes to vacate them... so... Pot or kettle ? I much prefer a guy who cherishes his Belt then a guy who doesn't…

Been picking Stevenson since this fight got signed. Was super excited for it then. Nothing has changed. I am excited for it. Still got Stevenson. Sure his competition has been "B+" at best, but he still has looked the part…