Floyd Mayweather Jr. figured out a 50th opponent, letting Conor McGregor have the early rounds before stalking him late and leaving the mixed martial artist defenseless and exhausted on the ropes.

Mayweather battered McGregor around the ring in the later rounds, finally stopping him at 1:05 of the 10th round Saturday night with a flurry of punches that forced referee Robert Byrd to stop the fight.

Before a pro-McGregor crowd that roared every time the UFC star landed a punch, Mayweather methodically broke him down after a slow start to score his first real stoppage in nearly a decade. He did it in what he said would be his final fight, against a fighter who had never been in a professional boxing match. 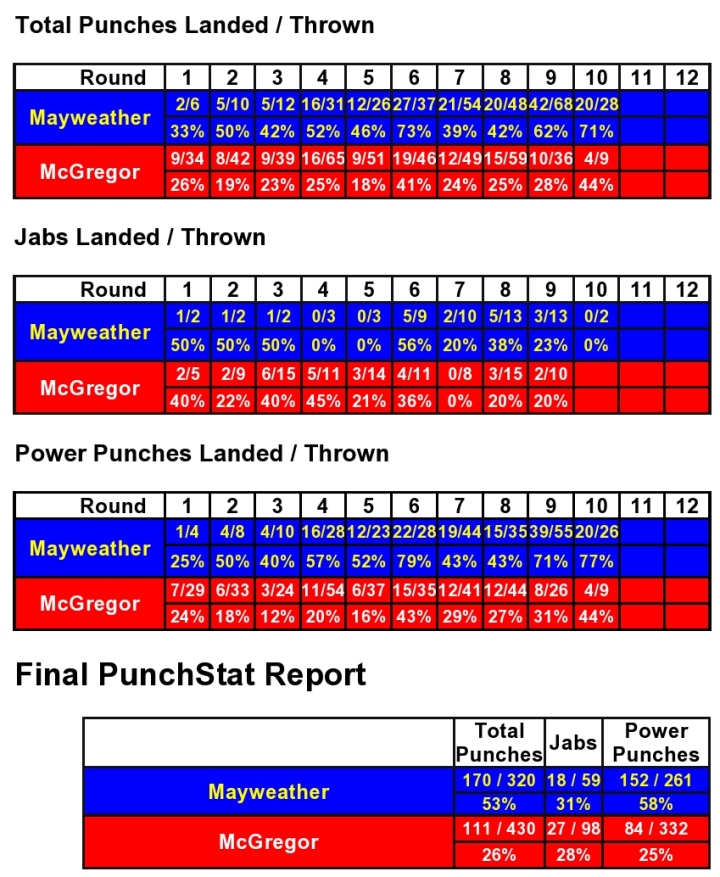 McGregor boxed surprisingly well early. But after landing some shots in the first three rounds, his punches seemed to lose their steam, and Mayweather went on the pursuit. McGregor backpedaled most of the way, stopping only to throw an occasional flurry as Mayweather wore him down.

McGregor had vowed to knock Mayweather out within two rounds, and he won the early rounds with movement and punches to the head. But the tide of the fight turned in the fourth round as Mayweather seemed to figure out what he had to do and began aggressively stalking McGregor.

Mayweather was widely criticized for not going after Pacquiao in their megafight, and he didn't make the same mistake this time. In a fight that could make him $200 million he seemed to stagger McGregor with a series of punches in the ninth round, then came back in the 10th eager to finish it off.

McGregor went over and hugged Mayweather. He seemed almost happy in the ring afterward, secure that he had given a good performance even in losing.

Mayweather ran his record to 50-0, surpassing Rocky Marciano's 49-0 record and giving himself a great parting gift. He repeated afterward that he was not going to fight again.

[QUOTE=MexicanStyle#1;17996337]What? who the hell mentioned anything about thinking Floyd would beat McGregor in the octagon... it's evident you were rooting for McGregor... no one told McGregor to call out Mayweather... why would a Football player like Tom Brady challenge Neymar,…

[QUOTE=SerialCrusher;17994223]McGregor never stood a chance in the ring with Floyd, but don't be foolish enough to think Floyd would beat Conor anywhere else. Don't be that fanboy. Adding kicks, elbows and grappling and Floyd would get beat up. Floyd wins…

[QUOTE=penontock;17987817]no surprise that in % landed, Floyd won each round. You have to be desperate to make the McGregor-landed-more-than-Pacquiao case.[/QUOTE] He didn't win every round. Were you watching the fight? Floyd clearly lost the first round and arguably the next…

[QUOTE=MexicanStyle#1;17988055]this was such a one sided sparring session/exhibition... for those of you (mainly MMA fans/millenials) who though McGregor had a chance.... get the f_ _k out of here... I've seen interviews and people including MMA commentators making incoherent statements such…

[QUOTE=Progrssive_Jedi;17989532]Conor did what Floyd let him do. Floyd stood in front of Conor for 8 rounds and didn't box. Then suddenly turned into a killer. You all are fools if you think he didn't do that on purpose.[/QUOTE] yeah, he…