Mayweather: Judges Must Score More Than 30 Seconds of Rounds

The retired superstar, whose company promotes Badou Jack, believes his fighter did more than enough to out-point Stevenson and win the WBC light heavyweight title from him. That didn’t happen, according to Mayweather, because judges Guido Cavalleri and Eric Marlinski didn’t give Jack enough credit for what he accomplished during some rounds in which Stevenson had brief success.

Cavalleri and Marlinski scored their back-and-forth fight even (114-114). 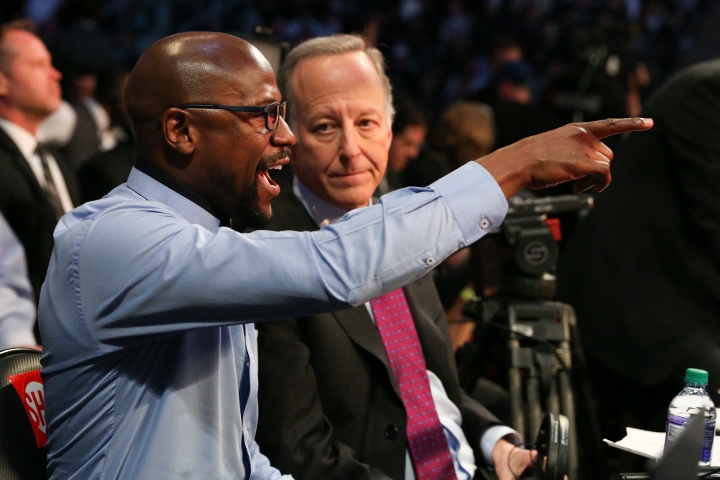 “He gave the first three rounds away,” Mayweather said. “I’m just speaking honest. One thing with me, I have to be honest with these fighters today. He gave the first three rounds away. But then, after that, picked up the pace. Combinations, right hands, left hooks, body shots. And then, the 11th round – even though Adonis Stevenson did win, they gave him the 11th round. But he landed a good body shot towards the end, I think the last 30 seconds of the 10th round. Then the 11th round, he came out strong for one minute.

Jack out-landed Stevenson in six of the 12 rounds, according to CompuBox, which counted more punches in five rounds for Stevenson (29-1-1, 24 KOs). CompuBox credited Stevenson and Jack for landing four punches apiece in the first round.

“I feel that Adonis Stevenson won the first three rounds, clearly,” Mayweather said. “But then, around the fourth round, it started taking a toll. So, and then he came back on and he won I think around the fifth. So if I called the fight, I would call the fight a 7-5, you know, leaning towards Badou. And it’s not me being biased. In the 11th round, [Stevenson] came on strong. But also, he came on strong in the first minute of the 11th round. But then, two minutes in the 11th round, he gave away.”

Mayweather noticed Stevenson stealing rounds in his own way.

“Like I said before, with the judges, a lot of times what we have to start watching is the whole round,” Mayweather said. “Sometimes a guy can come on. ‘Sugar’ Ray Leonard was one of the masters of doing that. In the last 30 seconds, he’d throw a flurry and steal a round. It was a smart move, though. What we have to stop watching is what we tend to watch. It’s just when a guy do something good in a round, instead of watching the whole round.”

If your going to be a judge in a fight. You must of had to be a professional fighter and a referee , not some promoters brother in law.

[QUOTE=stealthradon;18790684]Projecting so hard, and you had to insert GGG into this didn't you? Your life really revolves around him. Here's a challenge that would do you good. Don't mention GGG for 3 days.[/QUOTE] When he fights Jermall I'll stop making…

[QUOTE=Derranged;18790766]Perhaps if Jack actually attempted to win any of the early rounds, he might've won the fight convincingly. A draw seems fair.[/QUOTE] Couldnt agree more, cant start fighting in the 5th round and cry about the decision

[QUOTE=AdonisCreed;18792894]Agreed!!! Lol I'm a fan of Floyd but he's annoying AF now days lol[/QUOTE] lol for real man. that annoys the hell outta me lol reminds me of puffy dwl all up in the videos lol