Mayweather: Gervonta Davis is The Truth, He's The Face of Boxing

Davis lived up to his knockout-artist reputation with his 20th win inside the distance out of his 21 victories. 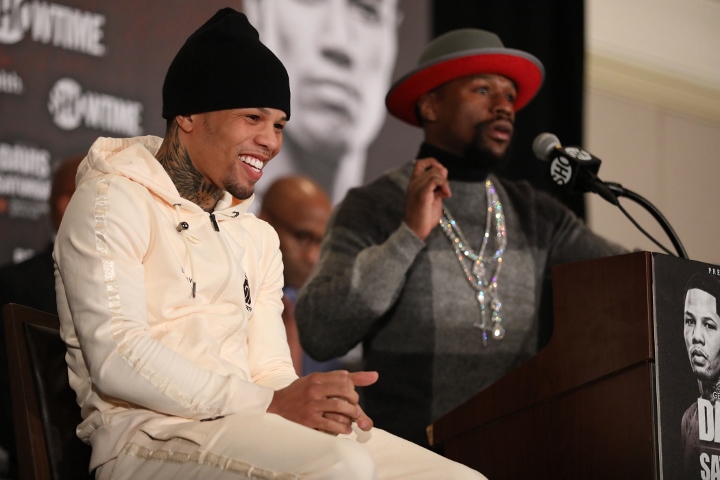 The powerful southpaw hurt Ruiz with a straight left and then followed up with a three-punch combination capped by a right hook to the side of Ruiz's face that dropped the challenger to a knee.

Ruiz, blood streaming from his nose, was able to rise but referee Jack Reiss called a halt at 2:59 of the first round.

Ruiz was a late replacement for three-division champion Abner Mares, who withdrew from the bout two weeks ago with a detached retina in his right eye.

Ruiz, a former super bantamweight world champion, was coming off a unanimous 12-round decision over Alberto Guevara on the undercard of Manny Pacquiao's 12-round demolition of Adrien Broner and took the fight on 10 days' notice.

Mayweather feels Davis is not getting his proper credit from reporters.

"He's the real one in boxing, he's the truth. Tank is the champion, give him his credit. Just like all of these other fighters, for all of these years, ya'll didn't want to give me my credit. And now all of ya'll are screaming this Pacquiao sh*t. Once again, when all of ya'll media people was screaming about what Pacquiao was going to do, then I kick his ass and you say let's do it again. It's Tank's night, Tank is the champion and Tank is the face of boxing," Mayweather said.

[QUOTE=richardt;19504645]I think Davis will head to 135 sooner than later because twice he has had a hard time making weight.[/QUOTE] I agree with u

[QUOTE=Boxing Trufe;19503789]This is par the course today for African American fighters. Fight bums, talk tough and run and duck top competition who really are the backbone of boxing. This is a hip hop ghetto culture of boxing that has turned…

Hes the vagina of boxing