Mayweather: Gervonta Davis-Tevin Farmer Would Be A PPV Fight

BALTIMORE – Gervonta Davis and Tevin Farmer have built up their rivalry through social media and face-to-face arguments that have attracted attention.

Floyd Mayweather, Davis’ promoter, thinks there’s now enough interest in a Davis-Farmer fight for it to warrant Davis’ debut on pay-per-view. Mayweather admits he doesn’t how many buys Davis-Farmer would produce, but the most successful pay-per-view attraction in sports history is willing to take that risk next if Farmer accepts a fight with his powerful southpaw from Baltimore. 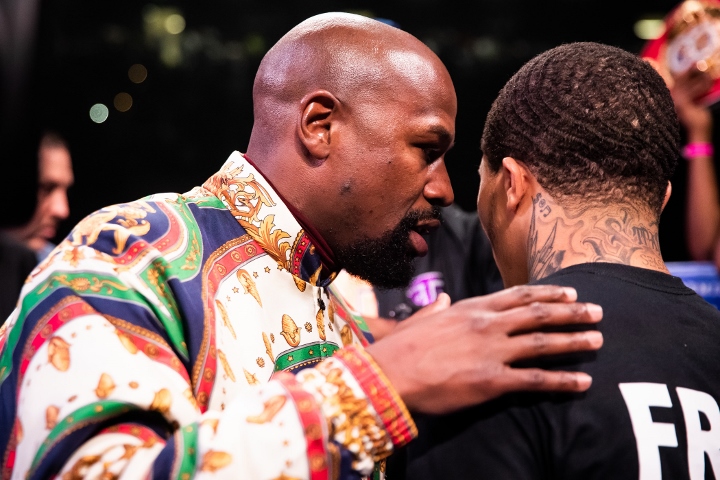 Five of Davis’ past six fights have been broadcast by Showtime. The other of those six fights, an eighth-round knockout of Francisco Fonseca, was part of Showtime Pay-Per-View’s telecast of the Mayweather-Conor McGregor fight in August 2017.

Even if Davis doesn’t face Philadelphia’s Farmer (30-4-1, 6 KOs, 1 NC) in his next fight, the emerging star is expected to box again before the end of 2019. Three-division champion Yuriorkis Gamboa (30-2, 18 KOs), who stopped Rocky Martinez (30-4-3, 18 KOs) in the second round on the Davis-Nunez undercard, also is a potential opponent for Davis’ next fight.

Regardless, Mayweather is confident that the 24-year-old Davis (22-0, 21 KOs) is ready to test his pay-per-view value based on how his fan base has grown. A capacity crowd of 14,686 attended the card headlined by Davis’ demolition of Nunez (21-3, 19 KOs).

“Life is about chances and rolling the dice,” Mayweather said. “What happened with me, I could’ve fought pay-per-view a long time [before I did against Arturo Gatti in June 2005]. But I had a promoter [Bob Arum] that didn’t believe in me. I had a promoter that had me play in the background. You know? I never cried and complained. What I did was said, ‘Put ‘em in front of me and I’ll continue to beat these fighters. Eventually, the world will see. And eventually, I’ll be a household name.’ So, it took time. But then, once I got away from the promoter, once I got away from Top Rank – that was the best thing in my career, to get away from Top Rank.

“Once I got away from Top Rank, it was crazy. I bought myself out of my contract, from Top Rank, for $750,000. And just when I was away from them, in three fights I made $750 million, when I was away from Top Rank. So, I made the best move that was best for my career. And the ultimate goal is to put [Davis] in a position so that he can break my record. The ultimate goal is see records broke. You know what I’m saying? So, I’m proud of Tank. I’m not the type of fighter that’s saying, ‘Nah.’ I wanna see my record get broken. And I wanna be a part of it. If I can help push this young kid to surpass me, I’m gonna continue to push him.”

fraud gayweather jr took his daddies crack pipe and is hooked on it. stop it!!! crack is bad for your health!!!!

Uh no. Even though Tank isn't a big star yet, he's definitely a fighter I'd pay to watch. Farmer though? His fights shouldn't even be featured on free TV or DAZN, much less PPV.

[QUOTE=j.razor;19950696]LOL....nah, just quality fights of fighters on different networks so we can get the fights we want.[/QUOTE] every "quality fight" isn't ppv material. ppv fights should decide something...and definitely shouldn't include a guy who's never even held a world title.

[QUOTE=Real King Kong;19950260]fuggit...let's make everything ppv.[/QUOTE] LOL....nah, just quality fights of fighters on different networks so we can get the fights we want.

[QUOTE=j.razor;19950557]I think you just underrating Tevin Farmer. Cross eyed & he still landing his punches..lol[/QUOTE] i think you're overrating him if you have him headlining a pay per view. and everybody agrees with me. so...?