Mauricio Lara produced one of the biggest shocks in a British ring in years as he knocked out Josh Warrington in the ninth round at the SSE Arena in Wembley.

Warrington had given up the IBF featherweight title in his bid to pursue big fights, but al the talk of Can Xu, Gary Russell Jr and Emanuel Navarette can be forgotten for now. Lara was meant to just be an easy warm up, but he blasted his way through Warrington.

It was a brutal night for Warrington, probably too brutal. He was first knocked down in the fourth round and never looked the same thereafter. Indeed, on a bad night for British officials, questions should be asked of the decision by referee Howard Foster to let him continue when he seemed unable to stand up properly. The referee’s first job, after all, is to protect the fighters. The same questions should be asked of his corner, lead by father-trainer Sean O'Hagan.

Warrington was flat. He tapped gloves at the end of each round as if he was treating it as a spar. But Lara took his chance. His style was basic but effective. When Warrington threw, he threw back. When he landed it had an impact. After the fourth round, Warrington was also an easy target.

It was 16 months since Warrington had been in the ring and with none of his many Leeds fans to cheer him on, the night was billed an treated as one to get past. Giving up his world title for this now looks a crazy decision.  It was his first defeat in 31 fights.

He started well enough. Warrington wasted no time in getting stuck in, landing a right over the top and a left to the body when Lara seemed to be waiting for referee Foster to split them. He then landed a good right that knocked Lara back into a corner.

He was then warned for pulling Lara’s head down, but as Warrington attacked, Lara tried to match him. He had some success, but was cut over the right eye barely two minutes into the fight. Still, there were signs that Warrington could be walking into trouble. 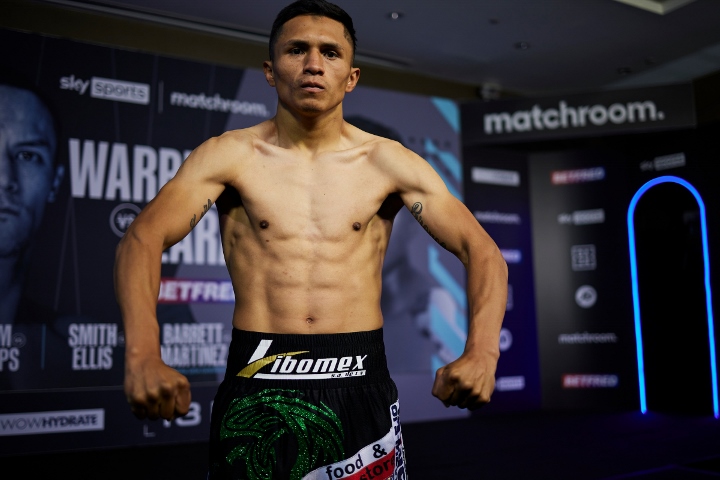 Warrington opened up more in the second, landing a good flurry, but the punches just seemed to bounce off Lara as he threw back at every opportunity and found his way through Warrington’s guard.

The former IBF champion was looking sluggish, but holding his own, but midway through the fourth round, he was caught clean by a big Lara left hook and staggered back across the ring. Lara was right on him, opening up but, rather than cover up, Warrington tried to punch back on unsteady legs.

After Warrington managed to clinch, Lara measured him with a perfect left hook that dropped him on his side. He beat the count but was on unsteady legs as he rose. Foster waved him back in and Lara landed again as Warrington stumbled around the ring, catching him with punch after punch. He looked out on his feet as the bell sounded.

At the start of the fifth round, Warrington still looked in a bad way, but he traded and at least landed with one good left hook. By the last minute of the round, his head looked to have cleared, although he still looked unsteady on his feet.

But, while Warrington was still trying to cover, Lara kept coming forward. Lara was looking marked up around the face, but he was landing to body and head. Warrington was giving ground but Lara was always in his face.

Rounds six and seven were more of the same, Warrington doing his best but being caught by heavier punches. Late in the seventh, another left hook seemed to hurt Warrington. The Leeds fighter went on the attack again in the eighth but another left hook straightened him up and then Lara followed up with another left hook. Lara was also landing well to the body and by the end of the round it looked like he had nothing left.

He was sent out again for the ninth round, though, and Warrington was staggered by a right, which was quickly followed up by an even bigger left hook. Foster hovered, but Lara landed three more left hooks, the final one of which sent Warrington crashing down on his back, Foster finally waving it off without counting at 0:54 of the ninth round.

Warrington had tried to get up, but paramedics rushed to the ring and gave him oxygen as he lay on his back. He was soon up, sat on his stool and walked out of the ring after congratulating Lara.

“It’s been a great night, I’m really happy for my family and all the people back home in Mexico,” Lara said. “We worked really hard for it and it worked out how we planned.”

Ron Lewis is a senior writer for BoxingScene. He was Boxing Correspondent for The Times, where he worked from 2001-2019 - covering four Olympic Games and numerous world title fights across the globe. He has written about boxing for a wide variety of publications worldwide since the 1980s.