Knowing their highly competitive battle was close, Flanagan began the 12th round in furious fashion by throwing a barrage of punches at Hooker. Hooker withstood Flanagan’s flurry and made the rest of the round very competitive. 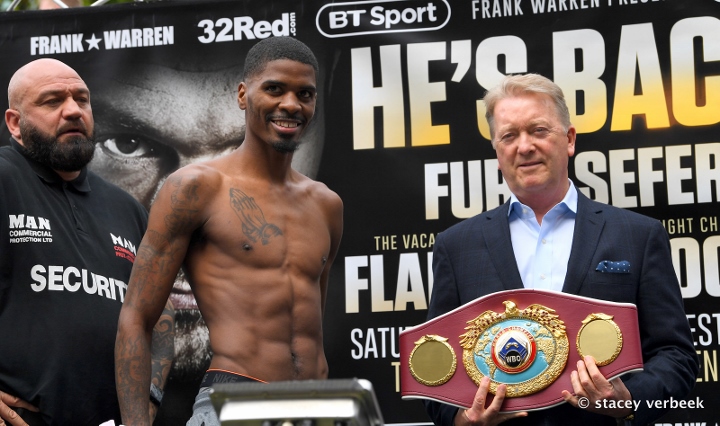 Hooked knocked Flanagan off balance by landing a left-right combination with 35 seconds remaining in the 11th round.

Hooker shoved an off-balance Flanagan into the ropes, face-first, with 45 seconds left in the ninth round. Hooker used his jab well for much of the ninth round, as Flanagan had trouble landing clean punches.

Flanagan rocked Hooker with a left hand when there was just under a minute to go in the eighth round.

Flanagan shoved Hooker to the canvas early in the seventh round, when Hooker tried to hold him. Flanagan was bleeding from a cut in the middle of his forehead by then, which made him fight with more urgency.

An accidental clash of heads earlier in the seventh caused the nasty gash on Flanagan’s face.

Hooker began rallying with about 30 seconds to go in the seventh. He threw numerous unanswered punches, several of which landed, as Flanagan’s work rate slowed down.

Hooker cracked Flanagan with a straight right to the middle of his face about seven seconds into the fifth round.

Hooker landed a solid straight right a minute into the fourth round. He kept Flanagan at a distance with his jab for much of the remainder of the round.

Flanagan backed up Hooker with a straight left hand with about 1:40 to go in the third round.

Hooker connected with a right hand just after the halfway point of the first round. Flanagan countered right away with a right-left combination.

Flanagan fought for the first time since April 2017. The Manchester resident also made his debut at 140 pounds.

The 28-year-old Flanagan, a former WBO lightweight champion, is ranked No. 1 in the WBO’s junior welterweight ratings. Hooker, also 28, is ranked No. 2.

They fought for the WBO 140-pound championship Terence Crawford relinquished to move up to the welterweight division.

Flanagan and Hooker were supposed to fight April 14 at O2 Arena in London. It was pushed back to Saturday night because the main event of that card, Billy Joe Saunders-Martin Murray, was postponed due to Saunders’ hand injury.

I would feel sorry for British Boxing if the vast majority of their fans weren't casual garbage...

[QUOTE=Tony Trick-Pony;18846374]Why was the description of this fight written starting from the twelfth and going backward to the first? Never seen that before. :lol1:[/QUOTE] This site does it all the time and it ****ING PISSES ME OFF

Two weeks ago I was very close to betting on Hooker winning at 4.50. Then I changed my mind and bet on Flanagan by knockout at 3.00. I am an idiot, and Flanagan has shown last night that he's not…

I thought Flanagan would win but honestly, I haven't watched much of either. I missed the fight. I dont get into nationality or ethnicity. If they fight well, win or lose, I still want to see all possible match ups.