Mattice: I Wanted To Stop Dutchover, But Not Like That

ShoBox: The New Generation veteran Thomas Mattice upset previously undefeated lightweight prospect Michael Dutchover after an eighth-round cut caused by a Mattice punch ended the fight in his favor by technical knockdown in front of an enthusiastic crowd at La Hacienda Events Center in Dutchover’s hometown of Midland, Texas, on SHOWTIME.

Referee Robert Velez ruled Dutchover’s cut was caused by a Mattice clean right hand stopping the action at 1:33 of the eighth round. At the time of the stoppage, the three judges had the fight 67-66 Mattice, and 68-65 and 69-64 for Dutchover after seven rounds of action.

“I wanted a stoppage but not that kind of stoppage,” said Mattice (11-1-1, 11 KOs), who was appearing on ShoBox for a fifth time. “Round by round it was a tough fight.” 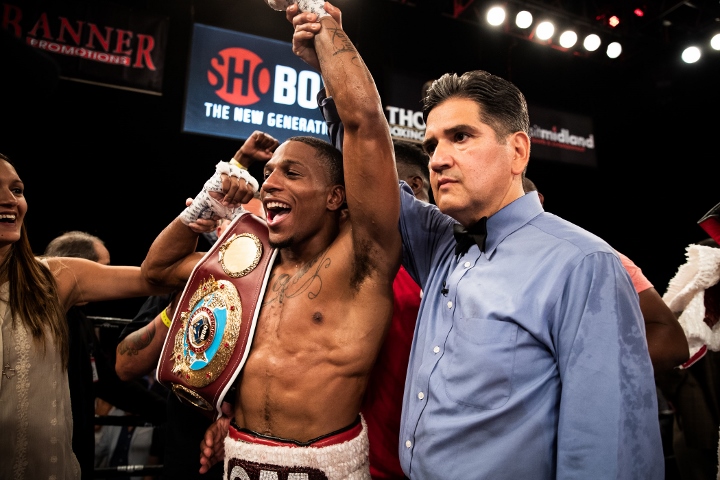 ShoBox expert analyst Steve Farhood said, “The doctor acted decisively,” later adding on the telecast: “In a very close fight, the deciding factor was the referee ruling that the cut was the result of legal punch instead of a head butt.”

Added fellow International Boxing Hall of Famer and blow-by-blow commentator Barry Tompkins: “It’s boxing, and you have to expect the unexpected.”

The 21-year-old Dutchover (13-1, 10 KOs) was making his second appearance on ShoBox, and fighting in his hometown for the first time as a professional. The last time he fought in his home state was an amateur in 2016 when he won the Texas Golden Gloves.

“I got cut with a big punch and it opened up and the ref said I couldn’t continue,” a disappointed Dutchover said. “I wanted to continue but they didn’t let me. “It was a great fight for the fans. The fight unfortunately got cut in the eighth round. I was up in the scorecards and I was going to finish the fight but it was out of my control, the referee stopped it and there’s nothing that I could do about it and that’s that.”

Dutchover entered the ring wearing the high school football jersey of Midland legend and former NFL star Cedric Benson, who was tragically killed in a motorcycle accident on August 17 in Austin.

Mattice held a five-and-a-half inch reach distance against Dutchover. “I kind of think that when I pushed him back he got in trouble, because he can’t really fight going backwards,” Mattice said. “Honestly, he couldn’t box with me, so I got my mind stuck on knocking him out to make it more competitive.

“My corner told me, ‘It’s the eighth round and we probably need a knockout.’ And that’s when I pressed him.”

If this was a stoppage, then fury should have lost by tko. In truth, neither fight should have been stopped. You stop a fight on cuts when the cut fella can no longer defend himself through lack of vision.

Dutchover don’t got the backing that Tyson “The Gypsy Fiend” Fury has! Fury should’ve had 2 losses on his record and both coming by stoppage, that guy is a true Gypsy with the way he gets away with so much!