The southpaw Korobov had success early countering Charlo with straight left hands that landed cleanly, even if they didn't deter Charlo from coming forward. Korobov was successful countering to the body as well and ended the fight with a 119 to 114 advantage in power punches landed according to CompuBox.

Charlo stayed consistent with his jab however through the early rounds and began to break through later as Korobov's right eye appeared to close during the middle rounds. Charlo out-jabbed Korobov by a 56 to 9 advantage in jabs landed, and also threw nearly 200 more punches throughout the fight per CompuBox. 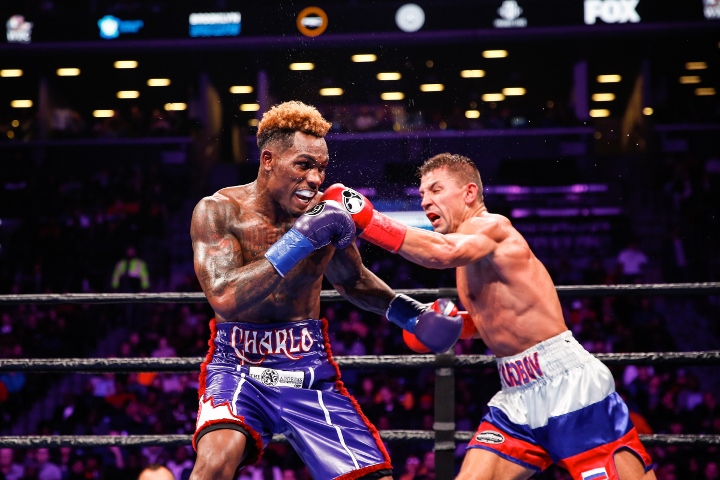 In round 12 Charlo closed the show and nearly stopped Korobov, who used his experience to hold and move enough to survive the round. Charlo landed a clean left hook to the head early in the round that put Korobov on shaky legs, and he followed up with several strong punches that forced Korobov to try to survive.

After 12-rounds of action, Charlo won the unanimous decision by scores of 119-108 and 116-112, even after watching his twin brother lose a tough decision minutes prior to his fight starting.

Korobov thought he had done enough to win the fight after he stepped in as a replacement opponent one week prior to fight night.

"I thought that I won the fight," said Korobov. "It was definitely a fight that could have gone either way, but I believe the people know that I won. I'm the most avoided fighter in boxing and I showed why tonight. I hope this performance will get me another title fight."

Give him a rematch Jermall ! He outboxed you hard

korbov schooled charlo. the other charlo lost his belt to a bum. lol a very bad night for the charlos.

[QUOTE=daggum;19384384]he wasn't close at all to getting knocked out. i just watched it. you make it sound like wilder-fury. it wasn't. when was he wobbling all over the ring? maybe you have the charlo pbc version? i just have the…

PBC corruption. Haymon has the judges paid off. First Wilder needed help from the judges. Then Charlo needed to get rescued. PBC shame on you!