Fairfax, Virginia - Heating up gradually from round to round, the first televised fight of the night delivered quality middleweight action that peaked in the final round. Ultimately, an early lead for 36-year old Matt Korobov (29-2, 14 KO), 160 ¾, of Russia was too much for 25-year old Immanuwel Aleem (18-2, 11 KO), 159 ½, of Richmond, Virginia to overcome but he didn’t leave with a loss.

An exciting second half of the contest resulted in a ten-round majority draw after initially being announced as a majority decision win for Korobov.

The referee was Michelle Meyers.

Korobov appeared to score a knockdown in the fourth but the referee ruled the shot as landing behind the head. Down the stretch of the round, both men landed big with the crowd coming alive as Aleem seemed to stun Korobov only for the Russian to land hard off the ropes and keep the edge. 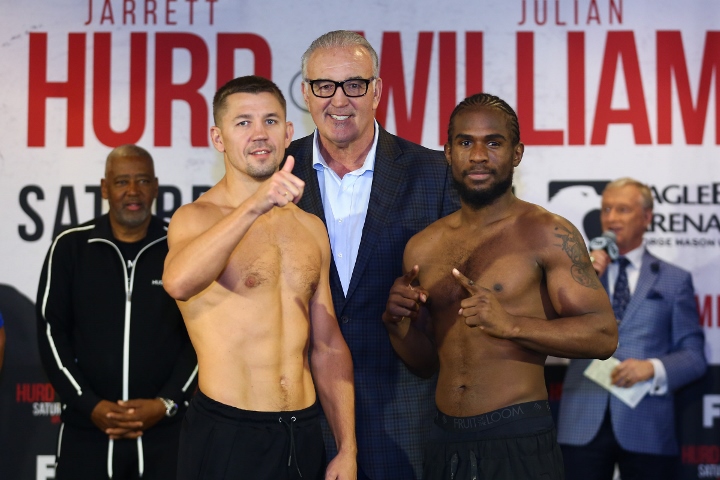 Action heated up again in the sixth.Korobov rocked Aleem with a southpaw left and kept the heat on with some more of the same.Aleem rode out the storm and fired back late in the round as Korobov slowed down, perhaps catching his wind.

Both men had their moments in a feisty eighth round. With Korobov forced to work off the ropes, the Russian landed some telling uppercuts while Aleem had him backing away with in spots, pressing and threatening with the right. Aleem was off his stool first for the ninth and began the round like he saw an opportunity. Korobov used Aleem’s aggression against him with more accurate, thudding shots to the head and body but Aleem kept coming and a late burst had the crowd roaring in his favor.

Aleem rewarded the crowd with a dogged effort in the tenth and final round. Still eating more leather than he was landing early, Aleem pressed and had Korobov on the back foot in the final minute, chasing him down with the hope of a knockout or knockdown in a fight that appeared to favor Korobov to then in terms of scoring. Aleem didn’t get either but he did send it to the cards with some wind at his back.

The official scorecard of judge Mark D’Attilio read 96-95 on the basis of an even final round. Apparently this was in error, as a 10-9 round for Aleem results in a draw on the cards. Aleem won the final three rounds on two cards including D’Attilio’s.

I'll be the promoter. For the middleweight Championship of Boxing Forum. Weigh in is required one day before their match. 3 round fight. Who wants to see it? Peace.

[QUOTE=GGG Gloveking;19744207]Well, you might have given me the address, but gave the wrong name. Or, you gave the right name, but the wrong address. So, which is it? Do you not know the name of the gym you train at?…

I had a dream over the weekend after the Korobov/Aleem fight...that the judges were all in agreement that the “Russian” Korobov was a spy for Putin blaming him for the election results and so they changed their scores! LOL...damn nightmare!…

[QUOTE=Sweet_Science2;19743472]You're pussie. I gave you the exact address to where I train. You said I wouldn't smack you. I live in MN, you want my picture like a [email protected] I typed your company up your name doesn't show up. If…