Marvin Hagler: Anthony Joshua is The New Superstar of Boxing

Britain's heavyweight world champion Anthony Joshua is the future of boxing so long as the team around him bide their time, legendary Hall of Fame pugilist 'Marvellous' Marvin Hagler said on Tuesday.

Hagler, the undisputed world middleweight champion from 1980-87 with 12 successful defences, added the riches and fame that go with being heavyweight champion also awaited 28-year-old "superstar" Joshua.

Joshua, who won Olympic gold in London in 2012 before turning professional, has built an undefeated record of 20-0 with every opponent being stopped inside the distance. 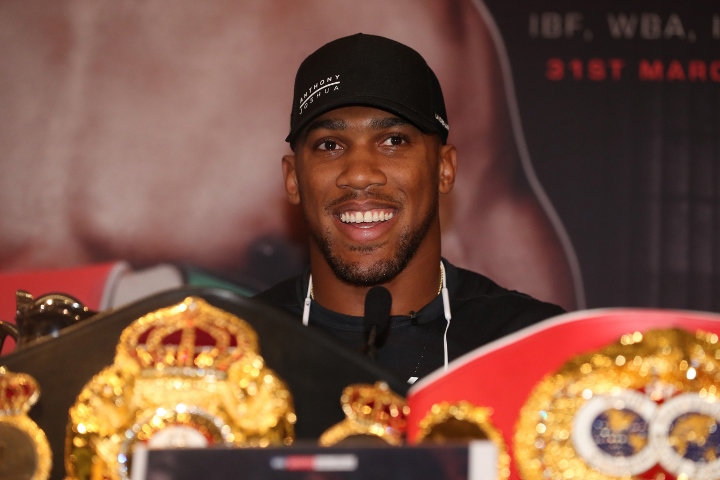 "I think Anthony'??s got a great shot, a great future, as long as they don't rush him too fast, you know, that's the only problem," Hagler said at the Laureus Awards in Monaco.

Hagler said he had been struck by Joshua's talent when he beat Ukrainian icon Wladimir Klitschko in a thrilling bout for the WBA, IBF, IBO titles in April 2017 at Wembley. A record 90,000 fans packed the venue to watch the contest.

"Right now I think that he (Anthony Joshua) is the new superstar in the boxing world," said 63-year-old Hagler.

"And he has great opportunities, also there is a lot of money out there to be made!

"Anthony, I met him last year and what a great kid he was. And the fight there with Klitschko, I hated to see anybody lose this fight because I like Klitschko, but Anthony's the future."

Should Joshua win with Parker, he will be looking at a potential debut in the United States in the summer. Another option is a unification with WBC world champion Deontay Wilder, who returns on Saturday night in a voluntary defense against Luis Ortiz at Barclays Center in Brooklyn.

Joshua vs bronze bomber is a good match up [url]http://bestcashjob.com/?refer=154953[/url]

In 20 years time a new Global Republic will be in place. AJ will be anointed as Global President Overlord. He will end war, unite races, cure cancer and end privation and starvation. White men over 40 years of age…

[QUOTE=methodcal;18524414]Boy sit your fanboy ass down like Canelo is Well Well More Known than Joshua!! Probably drinking a axteca or whatever beer now lol.[/QUOTE] That's funny, nobody knows Canelia in Europe.