Martin J Ward will be back in the ring next month.

The 28-year-old has been out since August when he stopped Josue Bendana at the O2 Arena in London.

Ward, a former British, Commonwealth and European super-featherweight champion, has been looking for an opportunity to get back into title contention and was being lined up for a fight Stateside at the end of January.

But after it couldn’t be rubber-stamped, ‘Wardy’ will be back on February 8, exclusively live on Sky Sports and DAZN. 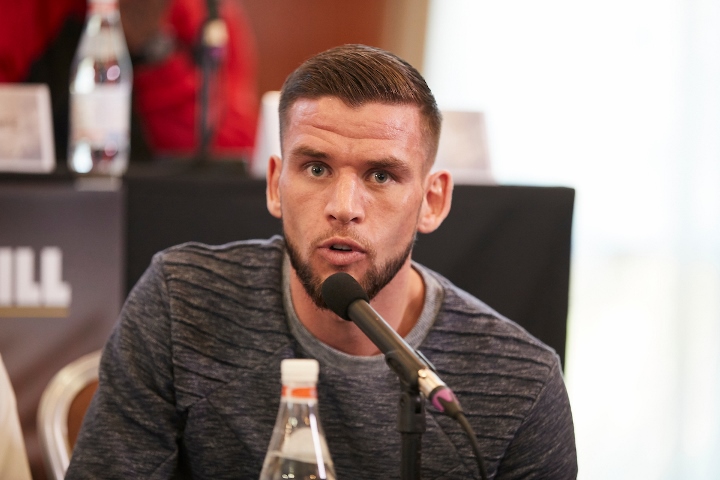 The Essex man has been named as an addition to the card which will be topped by the return of Kell Brook at the FlyDSA Arena in Sheffield.

The former IBF welterweight world champion was last in action back in December 2018 at the same venue when he took on Michael Zerafa and it will be American Mark DeLuca in the opposite corner when ‘The Special One’ finally comes back.

Kid Galahad will meet Claudio Marrero in a final eliminator for Josh Warrington’s IBF world featherweight title, Anthony Tomlinson is set to meet Stuart Burt in an official eliminator for Chris Jenkins’ British welterweight title and Hopey Price will fight for the third time since turning professional under the tutelage of Dave Coldwell.

Terri Harper puts her IBO female super-featherweight title at stake while challenging Eva Wahlstrom for the WBC female world title, Scottish super-middleweight John Docherty returns alongside Callum Beardow and Donte Dixon and there is a return to action for heavyweight favourite David Allen as he looks to get back on the horse following last July’s 10-round retirement defeat at the hands of David Price at the O2 Arena in London.

But Lee Reeves, who is trained by Kell Brook’s trainer Dominic Ingle, will be forced to wait before he returns.

The 24-year-old, who is undefeated in five with four quick, had been set to box on the same card as his gym-mate, but it has now been revealed that the former Haringey Box Cup champion will be back between the ropes on February 29 at the Eagles Community Arena in Newcastle.

The card, promoted by MTK Global and Lee Eaton, will be headlined by Ellis Corrie’s Northern Area welterweight title defence against Chad Ellis.

Joseph Laws, the man who is likely to go on to feature on Eddie Hearn and Matchroom’s Newcastle card on April 4 at the Utilita Arena, is understood to be on the bill alongside April Hunter and former English light-heavyweight title challenger Lawrence Osueke.

Anthony Ornsby and Steve Robinson, Basi Razaq, Alex Farrell and Tom Hill have also been named for the card.