Marriaga: I Am Ready To Take Shakur Stevenson's World Title

Miguel Marriaga has previously fallen short at the title level but has done his best to punch his way back into contention.

The hard-hitting featherweight from Cartagena, Colombia delivered a highlight reel 6th round stoppage of Alfredo Mejia in his latest performance this past Saturday in Puebla, Mexico. A left hook to the liver forced Mejia (14-3-3, 5KOs) to double over and roll around the canvas in pain as he was counted out in their ESPN+ streamed bout.

“I passed this test, and it was a great fight,” noted Marriaga (28-3, 24KOs). “I connected with a great body shot and that was it. I finished him. Thanks to God, we closed the year strong.” 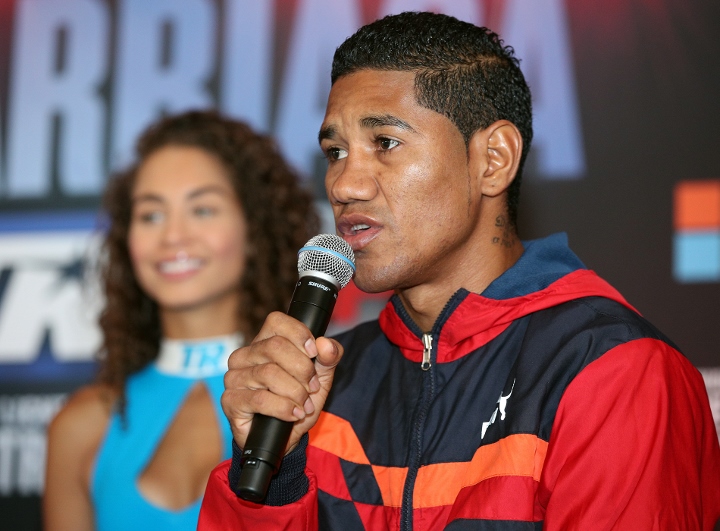 The feat marked his fourth straight victory following a knockout loss to pound-for-pound entrant Vasiliy Lomachenko (14-1, 10KOs) in an ill-advised trip up the scales. His lone two other defeats also came at the title level, dropping 12-round decisions to Oscar Valdez and Nicholas Walters.

Following in his win on Saturday, the 33-year old knockout artist feels if he’s ready for another shot at the division’s best.

“I want to challenge the champions,” insists Marriaga. “I want  [Top Rank] to test Shakur Stevenson with this Colombian warrior. I am ready to take his world title.”

The move is fully endorsed by those closest to the streaking contender.

“Marriaga ended the fight yesterday in spectacular fashion, and I am very happy that we were able to keep him busy before the year end,” Felix ‘Tutico’ Zabala Jr., Marriaga’s co-promoter—along with Top Rank—told BoxingScene.com. “We will be working in getting him a world title shot early next year.

“We will love to fight Shakur or any other champion in the featherweight division (Gary Russell, Jr., Josh Warrington, Can Xu). With his fourth straight knockout win, he truly deserves one more shot to become world champion, which we are confident will come the next time he is presented with such an opportunity.”

Bad matchup for Marriaga. Although he can brawl all day with Stevenson, he's just gonna be chasing him all night. After last weekend I've had enough of backward bicycling victorys where the winner never wants to engage.

I’m down for this fight

Marriaga didn't look good against a club fighter in his last fight but he does have heavy hands. I see this going similar to his fight with Loma.

[QUOTE=archiemoore1;20243786]While it's obviously better to get shakur now b4 he matures anymore, the problem is, even at this early stage of his career, he's already damn near unhittable. He's already too smart, too sharp and too strong for marriaga.[/QUOTE] hes…