Marquez's Trainer Fires Back at Erik Morales Over Pacquiao Jabs

During an interview from last week, Morales was asked for his thoughts on why a fight with Marquez had never come together.

Morales, 43-years-old, retired from boxing in 2012, after getting knocked out in his rematch with Danny Garcia at Barclays Center in Brooklyn.

He explained that Marquez was not at the top level during the prime years - when Morales was going through numerous wars. 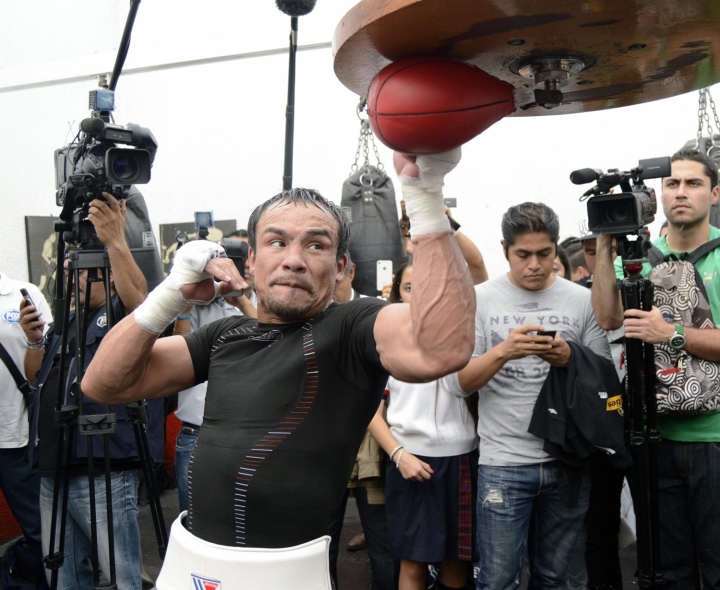 Morales also took a swipe at the comparisons that many fans make when it comes to their respective wins over Manny Pacquiao.

Because of the brutal way that fourth fight ended, Marquez's win is more celebrated among Mexican fight fans.

Morales explained that he didn't need a win over Pacquiao to define his career - and he also made it clear that it didn't take him four fights, he got the job done the first time.

"My career was not defined by Pacquiao. I didn't need to beat him. I don't want to be too arrogant but nobody gave me a boxing lesson," Morales explained to Fox Deportes. "Winning by knockout is important, but for me it was better to dominate them, make them suffer inside the ring.

"When I was fighting Barrera, when I was gaining weight [and moving up], Marquez was not there... he was fighting with people who were just starting out. It wasn't until I left boxing for a little while, that Marquez catapulted up [with respect to his standing among top fighters]. While I was were there, he didn't do that. I didn't need four opportunities to beat Pacquiao."

But Nacho had a different take on the matter, explaining from his perspective that Morales left out several details.

"What the guy [Morales] left out is that [Pacquiao] fought with Juan Manuel forty-something rounds and to be locked in a ring with the devil [for that long is impressive]... because [Pacquiao] is practically the devil inside the ring. And the perfect example of that is the beating he gave Erik Morales in the second fight. It was terrible facing Pacquiao in the ring... it was something terrible, because of the punching power, because of the speed, because of many things,” Nacho told El Boxcast.

“Marquez was never a saint of devotion for the president of the World Boxing Council. They never gave us the opportunity, between him and the owner of boxing in Tijuana, Fernando Beltrán, they always hid the opportunity to fight Morales or Barrera.

"We were at the home of the president of the World Council and he promised us that Marquez was the official challenger to the world championship and that, whether he wanted to or not, Morales had to fight him. And we left his house very happy, thinking that he was going to be named an official challenger, but the next day we find out that Morales' fight with Paulie Ayala was already scheduled and they put us back to the side."

[QUOTE=HewJohnson;20572950]I always thought man, it must be a b*tch having to fight Pacquiao in his prime. Boxers informed to fight PAC probably thinking “*****” man. PAC cuts out work for any of his go’s. Probably such a pain in the…

[QUOTE=j.razor;20571890]Wrong. Manny's "prime" was when he Manny didn't want to take the test....[/QUOTE] Then, why did Mayweather sign Pac up with PBC? Didn’t he think Pac was on PEDs and he wants to clean up boxing? Paying Pac to settle…

I always thought man, it must be a b*tch having to fight Pacquiao in his prime. Boxers informed to fight PAC probably thinking “*****” man. PAC cuts out work for any of his go’s. Probably such a pain in the…