Marlen Esparza overcame her lone career loss by decimating the perfect record of another divisional rival.

A masterful boxing performance and strong second half surge by Houston’s Esparza was enough to take an eight-round unanimous decision over previously unbeaten flyweight Sulem Urbina. Judges Dr. Lou Moret and Rudy Barragan both missed a hell of a fight, each scoring the contest 80-72. Judge Chris Migliore was in line with reality in scoring it 78-74 for Esparza in the opening bout of a four-fight DAZN livestream Friday evening from Fantasy Springs Resort Casino in Indio, California.

Urbina made her presence felt early in the fight, taking the fight straight to Esparza who sought to box for the most part. Right hand shots from Urbina found their mark, landing with authority on the occasions she was able to pin down Esparza.

The aggression of Urbina was a discomfort but nothing that Esparza—a 2012 Olympic Bronze medalist for the United States—couldn’t handle. The Houston native used in-and-out movement, standing and trading when necessary but otherwise outboxing Urbina who continued to come forward. 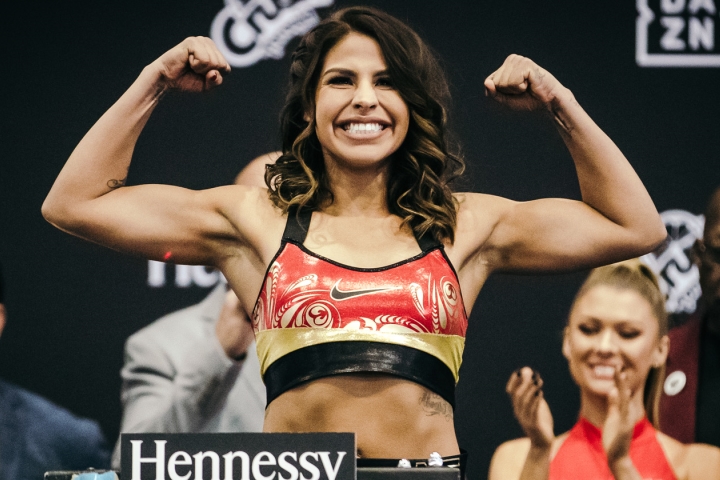 Head trainer Joel Diaz gave Urbina an earful in between rounds, demanding she stop fighting reckless and offer a more disciplined attack. The Phoenix-based Mexican flyweight did her best to heed the advice, picking up her already relentless pace as she landed and threw significantly more punches than Esparza in the first half of the contest.

A relatively even fight through four rounds swung in favor of Esparza in round five, by far the best of the fight as she significantly closed the gap in the punchstats. In her desire to make it a fight, Urbina was there to be hit. Esparza connected with a left hook in the frame, and dislodged Urbina’s mouthpiece during an exchange near the end of the round.

Esparza picked up the pace in round six, landing 22 punches and slipping most of the incoming from Urbina who looked to turn the tide in round seven as a mouse developed under her left eye. The unbeaten contender opened with her jab, immediately following with straight right hands. Esparza stood her ground, slipping shots on the inside and connecting with left hooks to the body before coming up top with the weapon and immediately slipping out of harm’s way.

Urbina opened the 8th and final round coming forward and throwing purposeful right hands. Esparza countered with combinations, willing to trade as Urbina drove her foe to the ropes. The effective use of her jab was the difference maker, a weapon Urbina failed to implement into her own attack.