The motivations to fight come from myriad places.

For some it’s money. Others dwell on fame. And still others just have a thing for violent interaction.

But prospect Mark Reyes Jr. is a little bit different.

Make no mistake, the Tampa-based welterweight is perfectly comfortable with the extreme elements of his occupation – namely punching a foe to the point of surrender or humane intervention, as he’s done in five of seven pro bouts, all wins – but there’s another distinct layer beneath the brawny exterior.

And it’s driven him to channel that strength in a more charitable manner, too.

“When it’s all said and done I want to be regarded as a champion that took over a division, someone that helped my community and gave back,” he said. “As well as inspire other young fighters like myself to seek their own greatness within themselves. To help and teach other fighters there is life after boxing.”

The inclination has prompted the 22-year-old – a son, nephew and great-grandson of ex-fighters – to set up an apparatus via which some of his least fortunate fans can benefit the most from his success.

Reyes has thrown his 147-pound weight behind anything devoted to battling childhood cancer, whether it be participating in 5K runs, selling T-shirts or other traditional souvenirs and pushing the envelope to offer a genuine bobble-head doll that he says does actually bear a strong resemblance.

“The bobble-heads came from an idea to be different than other fighters that are coming up,” he said. “Everyone has shirts that they sell as merchandise. I wanted to have something that was a little more personal to my fans. It’s hard to find anyone that hasn’t been affected by cancer indirectly or directly through someone they know or their family.

“In our family we’ve lost loved ones to cancer but they lived a full life. These children are just beginning their journey of life and they’re battling for their lives each and every day. These children and families need all the help possible and I’m willing to do what it takes. I didn’t imagine doing anything like this, yet here we are and the cause is for charity so it’s all that much more positive.” 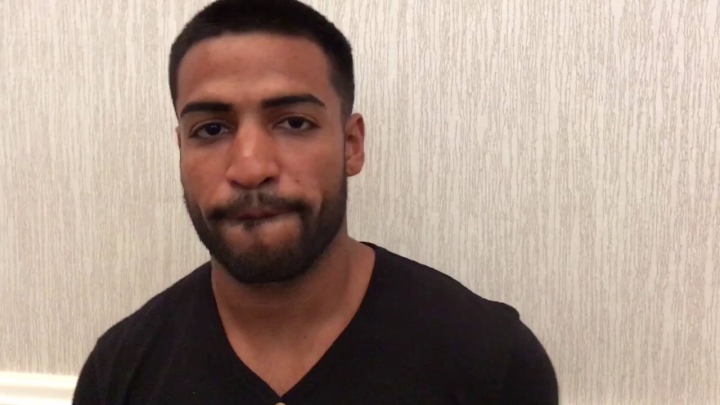 But, lest anyone think he’s too nice to fight, think again.

Reyes had designs on competing for the United States in the 2016 Summer Olympics before a left elbow injury a few weeks ahead of a qualifying tournament changed his plans. He spent several weeks on the shelf and decided, along with his father, Mark Sr., to transition to the pro game upon his return.

He finished 40-6 as an amateur and debuted as a punch-for-pay commodity a month before his 20th birthday, stopping Harrison Melendez in 84 seconds at Tampa’s A La Carte Pavilion in March 2016.

“It was exciting to say the least,” he said. “Before my debut it had been a few years since my family and friends got to see me fight at home, so I was a bit nervous. I didn’t want to disappoint them.”

He racked up another stoppage and a four-round unanimous decision by the end of that first calendar year, added two more wins in 2017 and kept busy through the first half of 2018 – stopping Larry Yanez and Javier Garcia in a combined four rounds in March and June, respectively.

And while it’s true three of his seven foes were debuting and the other four arrived with a combined 37-59-6 record, he feels like he’s ready for a significant step up in class. That should come when he next heads to the ring on Oct. 6 in nearby St. Petersburg, where he’ll look across and see a fighter – fellow Florida resident Travis Castellon – with 16 wins, 12 KOs and one draw in 18 pro outings.

“I know a few boxing greats, as well as an active fighter, and through the years each of them has given me great advice that I’ve taken into my own style. My defense is something that shouldn’t be overlooked,” Reyes said. “But I also take advantage of my speed and power. (I rooted for) Roy Jones Jr., and I’ve watched so much film on different fighters that I’ve taken a little bit from each and melted them in a pot.”

The Castellon bout will have some added luster thanks to the fledgling American Boxing Federation, which will award its Continental Americas welterweight title to the winner.

Reyes is ranked 101st among American welterweights by Boxrec.com, while Castellon is 124th.

“This is the biggest fight of my career,” Reyes said.

“I can finally show that I’m ready for the next step in the sport and that I have all the tools it takes. (I’m) not surprised with what my record shows so far, but I’m blessed and thankful to be in this position and to be rising up. Each fight you grow skills and experience, so if I fought the two guys I didn’t stop now, I’d say I would be 7-0 with seven KOs. But you learn from your mistakes to get the job done the next fight.

“I want to end this year with a bang and build immensely starting early next year.”

Fitzbitz says: Kudos to Diaz’s promotional team for getting him a trash WBA shot after he was trounced by a legit WBC champ. And kudos to anyone outside the hardcore set that actually knows who Rojas is.