Don’t be fooled by the one shutout scorecard in his favor; Mark Magsayo survived the toughest test of his career.

The unbeaten featherweight titlist from Philippines mustered a late rally to surge ahead of Mexico’s Rigoberto Hermosillo via split decision Saturday evening at Microsoft Theater in Los Angeles.

As has been the case throughout the pandemic and especially in California, scoring was an issue in the FS1 main event. Judge Rudy Barragan turned in his second straight horrible ringside performance of the night, scoring the contest a suspension-worthy 100-90 in favor of Magsayo. Dr. Lou Moret had the contest 96-94 in favor of Hermosillo, with Zachary Young ruling the contest 96-94 for Magsayo to split the difference. 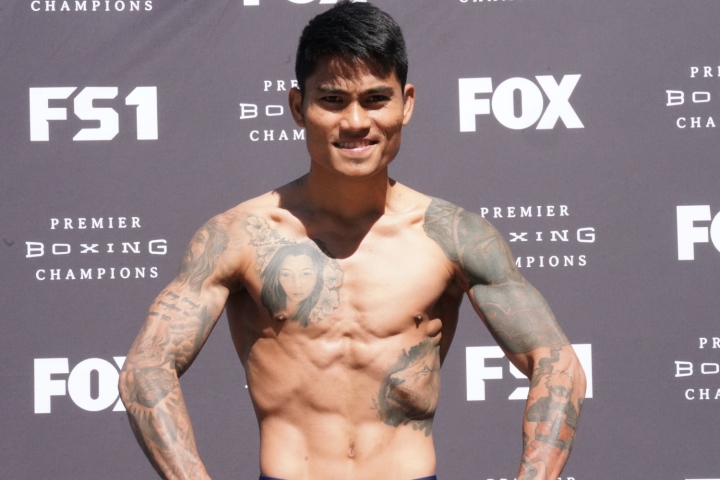 Magsayo’s dizzying hand speed was the difference in a fast-paced opening round. Hermosillo came to fight, landing left hands behind his flicking jab and earning the respect and attention of his unbeaten foe. Magsayo enjoyed by far the best moment of the round, slamming home a right hand which rocked Hermosillo in the closing seconds of the round.

Hermosillo was contending with a cut outside of his right eyebrow heading into round two. The LA-based Guadalajara didn’t get discouraged by the sight of his own blood, showing a willingness to trade with Magsayo who remained dialed in with his right hand. A clash of heads forced Magsayo to back off, with Hermosillo landing a left hand once action resumed.

Magsayo was landing the more telling blows in rounds three and four, but Hermosillo was the far more active of the two. It wasn’t effective in terms of banking rounds but enough to make Magsayo work through every sequence of the fight.

Round five marked the first time in the fight where Magsayo outlanded Hermosillo. A dedicated body attack by the Filipino contender got the job done, though hardly slowing down the relentless attack of Hermosillo who averaged more than 85 punches per round.

Hermosillo landed his best shot of the night in round seven, connecting with a left hand which clearly caught the attention of Magsayo who foolishly lunged inside after wildly missing with a right hand. Hermosillo continued to come forward in round eight, throwing far more punches but with Magsayo proving the more efficient of the two.

Magsayo came out for round nine responding to the urging of Hall of Fame trainer Freddie Roach to pick up the paee and turn things around in the fight. The 25-year old contender charged forward, landing a flurry which had Hermosillo in retreat for the first time on the night. Hermosillo was forced to the canvas midway through the round, though accurately ruled a slip by referee Jack Reiss. Magsayo continued to pour on the attack, connecting with a left uppercut and right hand while offering constant in and out movement.

Both boxers put their best foot forward in the 10th and final round. Hermosillo’s greater workrate was no longer a deterrent, as Magsayo showed superb defensive skills while dialing in with his right hand. Hermosillo stuck with his method of attack, connecting with a right uppercut and left hand down the stretch though the fight ending with Magsayo of the belief that enough work was put in to preserve his perfect record.

Hermosillo (11-3-1, 8KOs) landed 181-of-856 punches (21%) according to Compubox, his workrate clearly enough to win the fight on one scorecard and make it interesting on another. Magsayo’s cleaner punching and slicker defense—landing 136-of-417 punches (33%) proved to be the difference as he improves to 27-0 (20KOs).

The bout marked the first for Magsayo under legendary countryman Manny Pacquiao’s MP Promotions banner, with past promotional issues resulting in a 15-month inactive stretch heading into the night. Among his future goals are a showdown with featherweight titlist Gary Russell Jr., hoping to serve as the challenger for Russell’s annual ring appearance in 2021.

I have it a draw. 95-95 No way one judge had it a shut out for magsayo. Simply ridiculous.

The problem was Hermosillo was throwing pitty pat pat punches that didn't look too good in the eyes of the judges whereas Magsayo fights in spurts but lands the most effective punches. It look more like Magsayo was beaten by…